The United States of America (band)

The United States of America (band) 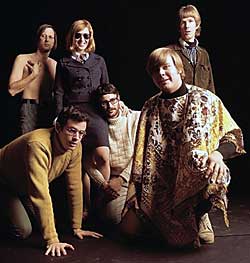 The United States of America was an and band whose works are an example of early in .

Formed in 1967 by Joseph Byrd, the band membership consisted of the following: Joseph Byrd (, electric , organ, calliope, , and Durrett Electronic Music ), Dorothy Moskowitz (lead vocals), Gordon Marron (, ), Rand Forbes (an early adopter of the fretless electric bass) and Craig Woodson (drums and percussion).
also performed on the record with occasional organ, piano, and calliope; he became a full member of the band on its first and only tour.

Their self-titled record was recorded in December 1967, produced by David Rubinson for , and released in . It was rereleased on CD by Sundazed Records in 2004 with various alternate takes, demos, and outtakes.

Their sound blended a range of musical genres, including , psychedelic, and progressive. One of the more notable points of the band was that it had no guitar player, which for its time was quite radical, as the electric guitar occupied a central position in rock music of the time. Instead, they used strings, keyboards and electronics, including primitive synthesizers, and various audio processors, including the ring modulator.

The record was released in early 1968, at a time when there was a receptive audience for “underground music” which combined musical experimentalism with radical social and/or political lyrics – other examples, in their very different ways, including the (who shared a common background in the New York experimental music scene; according to Moskowitz, at one point tried to join the USA), (whom Byrd considered a niche-marketer "subsumed in a self-referential loop" [Kevin Holm-Hidson. "Progressive Prck Reconsidered", , 2002, p. 61] ), Love’s "", , and .

Whether intended or not, the record took the form of a coherent “song cycle”, a radical commentary on contemporary American society. The words ranged from satires on decadence ("The American Metaphysical Circus" , "..Wooden Wife..") to lyrical expressions of longing (the pastoral "Cloud Song", the political "Love Song For The Dead Che"). Musically, the songs ranged from pseudo-classical elegance ("Stranded In Time", "Where Is Yesterday") to aggressive discordance and hard rock ("The Garden of Earthly Delights", "Hard Coming Love"), with heavy electronic distortion and collages of “found” music such as brass bands, Byrd being heavily influenced by . The final suite "The American Way of Love" integrates most of these elements, with a dreamlike ending containing a collage of earlier tracks.

Despite the widespread support of music critics, the album sold poorly and soon disappeared - at least in the USA, although in the UK it remained fondly remembered, in part because of one track ("Wooden Wife") being used on a popular CBS sampler album.

The band's tour in support of the record led to difficulties of its own. Members of the band were arrested for drug possession, and they had a number of serious equipment failures - these and other tensions made Byrd increasingly difficult to work with, and the group largely unmanageable, and resulted in the band splitting up.

* went on to form Joe Byrd and the Field Hippies, who released an LP, "", in 1969. Byrd also released a number of additional recordings under his own name, as well as scoring a number of films, writing music for television, and working as a music producer. He is married, lives in northern California near the Oregon border, and teaches music-related classes at .
*Dorothy Moskowitz(-Falarski) later worked with 's All-Star Band, married, has two daughters, and lives in a suburb of Oakland, California. She writes for and teaches music to children in her local school system, and has developed a number of other music projects in the San Francisco Bay area.
* [http://www.kauaimusicalarts.com Gordon Marron] became a Los Angeles studio musician and now lives in Hawaii.
* [http://www.CraigWoodson.net Craig Woodson] teaches percussion in the Cleveland, Ohio area and has toured with the . He has also developed the educational [http://www.worlddrumming.net World Drumming] project used in American schools nationwide.
* composed soundtracks for and TV cartoon specials and for 's film "Fritz the Cat."
*Rand Forbes has worked as an Oracle DBA, owned a software development company, and continues to play classical bass in Southern California. Rand currently lives in the Cleveland, Ohio area, close to Craig Woodson.

covered "The Garden Of Earthly Delights" on the 1982 release "Manual Of Errors".

The British group released a cover version of "Love Song For The Dead Che" as their debut single in 1993.

The USA were thanked by the group in the liner notes of their 1997 album "Portishead", for the song "Half Day Closing" which bears a more than superficial resemblance to "American Metaphysical Circus".