The Bignoniaceae, or Trumpet Creeper Family, is a family of flowering plants comprising about 650-750 species in 116-120 genera. Members of the family are mostly trees and lianas (Podranea and Macfadyena), shrubs and more rarely herbaceous plants. As climber plants, they are twine climbers or tendril climbers, and rarely root climbers. Most lianas are found in tribe Bignonieae, that alone contains nearly half the number of species of the family. The family and its genus Bignonia was named after Jean-Paul Bignon by his protégé Joseph Pitton de Tournefort in 1694.

Other common names for this family include jacaranda family, bignonia family or catalpa family. This family is commonly found as ornamental plants due to their large and often colorful flowers. Important members include the calabash tree (Crescentia cujete) and many genera cultivated in horticulture: Campsis, Catalpa, Jacaranda, Kigelia, Pandorea, Spathodea, and Tabebuia.

The family, cosmopolitan, is present in both the Old World and the New World, with Catalpa the only genus common to both. Members are distributed mostly in the Tropics and subtropics, with the center of diversity in South America. A number of temperate species are found, mainly in North America and East Asia. 13 species in 8 genera (including 2 naturalised) are present in southern Africa. 12 genera and 35 species are present in China, 21 of which are endemic to China. In Australia, 10 genera and 17 species are present, only in the mainland states. In India, the family is represented by 15 genera and 40 species, which mostly occur in Western and Southern India and a few species in the Himalayas.

In twining members, the stem is characterized by the presence of variant secondary growth: in four to multiple of four segments of the cambium the activity changes early in development, with the production of more phloem and less xylem, giving the stem in cross-section the form of a cross. Many lianas of this family are, therefore, called cross-vines. Anatomically, the phloem formed by the variant portions of the cambium is different from that produced by the regular portions, with wider sieve tubes and less parenchyma. Evolutionary studies with these plants showed that the cambial variants are evolving in a recapitulatory fashion and towards an increase in anatomical complexity.

Members of this family commonly have pinnately compound or multiply compound leaves. Palmately compound leaves are rare, but are found in Tabebuia. Simple leaves are also rare and, when observed, are often dissected in pinnatifid or palmatifid fashion. Leaves are typically in opposite but whorled (in Kigelia) or spiral arrangements are also found. Leaves are petiolate and exstipulate (but pseudostipules are present in the genus Markhamia). Domatia occur in at least 14 genera. 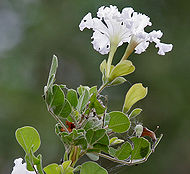 Flowers are bisexual, hypogynous and zygomorphic, either solitary or aggregated into racemes or cymes (dichasium or helicoid cyme). Inflorescence, when it occurs, might be axillary or terminal. Bracts and bractlets are present and sometimes deciduous.

The sepals are fused, forming a synsepalous calyx either entire or toothed in 5 lobes. The petals are equally fused into a sympetalous campanulate corolla that also has 5 lobes. These lobes are often clearly shorter than the tube. The corolla and calyx are distinct from each other. Sometimes, a 2-lipped (bilabiate) corolla is observed. In bud, the lobes are imbricate and more rarely valvate (such as in Pyrostegia).

The androecium is didynamous, i.e. there are 4 stamens occurring in 2 pairs of different lengths. The stamens are inserted epigynously and alternate with the corolla lobes. The anthers are often connivent but also separate from one another sometimes. One staminode may be present.

The gynoecium is stylate and median. It consists of one compound pistil with 2 carpels, a single style, and a superior ovary with typically 2 locules (more rarely 1 or 4), each bearing numerous axile ovules. An annular or cupular nectary disk usually occurs around the ovary base. Ovules are anatropous, with micropyles directed downward.

The fruit is typically an elongated dehiscent capsule that opens loculicidally or septicidally. The fruit can sometimes be an indehiscent berry.

The seeds, numerous, are usually winged and wind-dispersed but occasionally also comose and wingless. Arils are absent. Seeds do not have endosperms. There are 2 cotyledons. Germination is either phanerocotylar or cryptocotylar.

Besides their use as ornamental plants, some members also provide timber, such as roble de sabana (Tabebuia rosea), Catalpa, Oroxylum, Haplophragma, Spathodea, Meliosma, Stereospermum. Fruit from the calabash tree (Crescentia cujete) is used in the tropics as a water container. The fruit of the sausage tree (Kigelia africana) is used in Africa as a laxative and for dysentery. The jacaranda is common as an avenue tree.