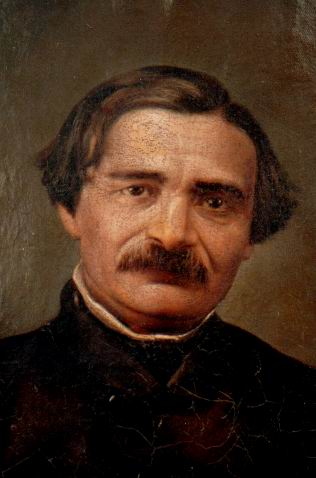 Ion Heliade Rădulescu or Ion Heliade (also known as "Eliad" or "Eliade Rădulescu"; IPA-all|jon heliˈade rəduˈlesku; , &ndash;, ) was a n-born n academic, Romantic and Classicist poet, essayist, memoirist, short story writer, newspaper editor and politician. A prolific translator of foreign literature into Romanian, he was also the author of books on and history. For much of his life, Heliade Rădulescu was a teacher at in , which he helped reopen. He was a founding member and first president of the .

Heliade Rădulescu is considered one of the foremost champions of from the first half of the 19th century, having first risen to prominence through his association with and his support of Lazăr's drive for discontinuing education in Greek. Over the following decades, he had a major role in shaping the modern Romanian language, but caused controversy when he advocated the massive introduction of Italian s into the . A Romantic nationalist landowner siding with moderate liberals, Heliade was among the leaders of the , after which he was forced to spend several years in exile. Adopting an original form of , which emphasized the role of the aristocratic s in Romanian history, he was rewarded for supporting the and clashed with the radical wing of the 1848 revolutionaries.

Heliade Rădulescu was born in , the son of Ilie Rădulescu, a wealthy proprietor who served as the leader of a patrol unit during the 1810s, and Eufrosina Danielopol, who had been educated in Greek.

After basic education in Greek with a known as Alexe, Ion Heliade Rădulescu taught himself reading in Romanian Cyrillic (reportedly by studying the "" with the help of his father's n servants). [Măciucă, p.VI, XXXVII; Stănescu-Stanciu, p.67–68] He subsequently became an avid reader of popular novels, especially during his 1813 sojourn in Gârbovi (where he had been sent after other areas of the country came to be ravaged by "").

In 1822, after Gheorghe Lazăr had fallen ill, Heliade reopened Saint Sava and served as its main teacher (initially, without any form of remuneration).

During the late 1820s, Heliade became involved in cultural policies. In 1827, he and founded "Soţietatea literară românească" (the Romanian Literary Society), which, through its program (mapped out by Heliade himself), proposed Saint Sava's transformation into a , the opening of another such institution in , and the creation of schools in virtually all Wallachian localities. [Măciucă, p.VII, X, XXXVII] In addition, "Soţietatea" attempted to encourage the establishment of Romanian-language newspapers, calling for an end to the state monopoly on es. The grouping, headquartered on central Bucharest's Podul Mogoşoaiei, benefited from Golescu's experience abroad, and was soon joined by two future Princes, and . Its character was based on ; ["Encyclopedia of Revolutions of 1848"; Djuvara, p.317] around that time, Heliade is known to have become a Freemason, as did a large section of his generation. [Djuvara, p.317; ro icon , [http://www.itcnet.ro/history/archive/mi1998/current6/mi10.htm "1848: Revoluţia intelectualilor"] , in "Magazin Istoric", June 1998]

In 1828, Heliade published his first work, an essay on , in the n city of Hermannstadt (which was part of the at the time), and, on , , began printing the Bucharest-based paper "".

In 1823, Heliade met Maria Alexandrescu, with whom he fell passionately in love, and whom he later married. By 1830, the Heliades' two children, a son named Virgiliu and a daughter named Virgilia, died in infancy; subsequently, their marriage entered a long period of crisis, marked by Maria's frequent outbursts of jealousy. Ion Heliade probably had a number of extramarital affairs: a Wallachian Militia officer named Zalic, who became known during the 1840s, is thought by some, including the literary critic , to have been the writer's illegitimate son. Before the death of her first child, Maria Heliade welcomed into her house Grigore Alexandrescu, himself a celebrated writer, whom Ion suspected had become her lover. Consequently, the two authors became bitter rivals: Ion Heliade referred to Alexandrescu as "that ingrate", and, in an 1838 letter to , downplayed his poetry and character (believing that, in one of his s, Alexandrescu had depicted himself as a , he commented that, in reality, he was "a piteous rook dressed in foreign feathers"). Despite these household conflicts, Maria Heliade gave birth to five other children, four daughters and one son (Ion, born 1846).

In October 1830, together with his uncle Nicolae Rădulescu, he opened the first privately-owned printing press in his country, operating on his property at "Cişmeaua Mavrogheni", in (the land went by the name of "Câmpul lui Eliad"&mdash;"Eliad's Field", and housed several other large buildings). Among the first works he published was a collection of poems by , translated by Heliade from French, and grouped together with some of his own poems.

Heliade began a career as a civil servant after the "ie" commissioned him to print the "Official Bulletin", and later climbed through the official hierarchy, eventually serving as "". This rise coincided with the establishment of the "" regime, inaugurated, upon the end of the Russo-Turkish War of 1828–1829, by a Imperial Russian administration under . When Kiselyov placed an order with Heliade for the printing of official documents, including the "Regulament", the writer and his family were made prosperous by the sales. Nevertheless, Heliade maintained contacts with the faction of reformist s: in 1833, together with , , , , Ştefan and , as well as others, he founded the short-lived "Soţietatea Filarmonică" (the Philharmonic Society), which advanced a cultural agenda (and was especially active in raising funds for the National Theater of Wallachia). ["Encyclopedia of Revolutions of 1848"; Măciucă, p.VII, XII–XIII, XXXVIII] Aside from its stated cultural goals, "Soţietatea Filarmonică" continued a covert political activity. ["Encyclopedia of Revolutions of 1848"; Giurescu, p.131; Măciucă, p.XII]

In 1834, when Prince came to the throne, Heliade became one of his close collaborators, styling himself "court poet". Several of the poems and discourses he authored during the period are written as s, and dedicated to Ghica, whom Heliade depicted as an ideal prototype of a monarch. As young reformists came into conflict with the prince, he kept his neutrality, arguing that all sides involved represented a privileged minority, and that the disturbances were equivalent to "the quarrel of wolves and the noise made by those in higher positions over the torn-apart animal that is the peasant". He was notably critical of the radical , whom he satirized in the poem "Căderea dracilor" ("The Demons' Fall"), and later defined his own position with the words "I hate s. I fear anarchy". [Măciucă, p.VII]

It was also in 1834 that Heliade began teaching at the "Soţietatea Filarmonică"'s school (alongside Aristia and the musician ), and published his first translations from Lord Byron (in 1847, he completed the translation of Byron's "Don Juan"). [Măciucă, p.X] The next year, he began printing "Gazeta Teatrului Naţional" (official voice of the National Theater, published until 1836), and translated 's "" into Romanian. [Măciucă, p.XII, XXXVIII] In 1839, Heliade also translated ' "" from a French source. The first collection of his own prose and poetry works saw print in 1836. Interested in the development of local art, he contributed a on drawing and architecture in 1837, and, during the same year, opened the first permanent exhibit in Wallachia (featuring copies of Western paintings, portraits, and casts of various known sculptures).

By the early 1840s, Heliade began expanding on his notion that modern Romanian needed to emphasize its connections with other through s from Italian, and, to this goal, he published _ro. "Paralelism între limba română şi italiană" ("Parallelism between the Romanian language and Italian", 1840) and _ro. "Paralelism între dialectele român şi italian sau forma ori gramatica acestor două dialecte" ("Parallelism between the Romanian and Italian Dialects or the Form or Grammar of These Two Dialects", 1841).

Before Alexandru Ghica was replaced with , his relations with Heliade had soured. In contrast with his earlier call for moderation, the writer decided to side with the liberal current in its conspiratorial opposition to Bibescu.

During the early 1880s, and his "" attempted to preserve Heliade's status and his theories when these were faced with criticism from "Junimea"; by 1885, this rivalry ended in defeat for Macedonski, and contributed to the disestablishment of "Literatorul". [Vianu, Vol.II, p.362, 376]

Although a "Junimist" for a large part of his life, Ion Luca Caragiale himself saw a precursor in Heliade, and even expressed some sympathy for his political ideals. During the 1890s, he republished a piece by Heliade in the Conservative Party's main journal, "Epoca". One of Caragiale's most significant characters, the Transylvanian schoolteacher , shares many traits with his counterparts in Heliade's stories. Developing his own theory, he claimed that there was a clear difference between, on one hand, the generation of Heliade Rădulescu, , and , and, on the other, the National Liberal establishment formed around , and &mdash; he identified the latter grouping with , , and , while arguing that the former could have found itself best represented by the Conservatives. [, "Junimea şi junimismul", Vol. II, Editura Minerva, Bucharest, 1998, p.202-204, 228. ISBN 973-21-0562-3]

Comments about Heliade and his Bucharest statue feature prominently in Macedonski's short story "Nicu Dereanu", whose main character, a daydreaming Bohemian, idolizes the Wallachian writer. [Vianu, Vol.II, p.429–430] "", a modernist literary magazine of the , edited by , owed its name to "", making use of an antiquated variant of the name (a form favored by Heliade). During the same years, made reference to Heliade in his novel "", which depicts events from 's lifetime. [Vianu, Vol.III, p.317]

In his "Autobiography", the Romanian philosopher indicated that it was likely that his ancestors, whose original surname was "Ieremia", had adopted the new name as a tribute to Heliade Rădulescu, whom they probably admired. [, "Autobiography", , Chicago, 1990, p.4. ISBN 0226204073]

* [http://www.acad.ro/academia2002/acadrom/pag05_02.htm "The Humanities and The Social Sciences in The Academy. Literature, Folklore and the Arts"] , at the site
*ro icon Răzvan Pârâianu, [http://uk.geocities.com/razvanparaianu/IHRadulescu.htm "În amintirea lui Ion Heliade Rădulescu. Aniversarea a 200 de ani de la naşterea sa"] (page dedicated to the memory of Ion Heliade Rădulescu, upon the 200th anniversary of his death)