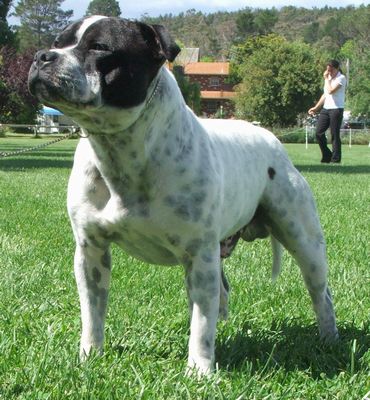 The Staffordshire Bull Terrier is a medium sized stocky, muscular and athletic ability. They have a broad head, defined occipital muscles, a relatively short foreface, half prick ears, dark round eyes and a wide mouth with a clean scissor-like bite. The ears are small and either rose or half-prick. Drop ears are seen however they are faulted in the show ring. The cheek muscles should be pronounced. Their lips show no looseness, and they rarely drool. The head tapers down to a strong well muscled neck and shoulders placed on squarely spaced forelimbs. Their rib cage is well sprung and is topped by a level top line. They are tucked up in their loins and the last rib of their cage should be visible. Their tail is carried like an old fashioned pump handle and should be neither too long nor too short. Their hind quarters are well muscled and are what gives the Staffordshire drive when gaiting. They are well let down in the hock. They may be colored black, brindle, red, fawn, blue, white, or any blending of these colors with white. White with any color over an eye is known as piebald or "pied". Skewbald is white with red patches. Liver-colored and black and tan dogs sometimes occur but these are considered an unacceptable color for the show ring or any reputable breeding program. The coat is smooth and clings tightly to the body giving the dog a streamline appearance. The dogs stand 35–40 cm (14–16 in) at the and weighs 24 to 32 pounds (with male dogs heavier). Like many breeds the 'Staffordshire Bull Terrier' can suffer from several health problems including and breathing problems. Overall they are a very healthy breed...

United Kennel Club states that "This breed has indomitable courage, high intelligence and tenacity. Coupled with its affection for its friends, and children in particular, its quietness and trustworthy stability make it an all-purpose dog." [ [http://www.ukcdogs.com/WebSite.nsf/Breeds/StaffordshireBullTerrier?OpenDocument&Click= Official U.K.C. Breed Standard] ] However, the organization cautions that their standards are only intended for those already familiar with the breed or UKC judges. [ [http://www.ukcdogs.com/WebSite.nsf/WebPages/LrnBreedInfo Breed Information] ]

As with any breed, steps can taken by Stafford enthusiasts to stop the spread of hereditary genetic flaws which, as with flaws in most breeds, have spread through irresponsible breeding.Two of the conditions that can be detected by DNA testing are L-2-hydroxyglutaric aciduria (L2HGA) and Hereditary Cataracts (HC). This testing need only be done once.The are another two conditions which must be checked by way of an Ocular examination throughout the life of a breeding Stud or Brood-bitch to minimise the transfer & spread of the conditions.The first is distachiasis (commonly known as “double eyelash”) where eyelashes are misdirected and begin to rub against the eye, particularly the cornea, causing ocular surface damage.The second is Persistent Hyperplastic Primary Vitreous (or PHPV) which is where blood supply to the ocular lens fails to regress and fibrovascular tissue forms causing hazy vision.

Staffy's love to sunbathe on their backs which is why melenoma is common in the stomach area.

Before the nineteenth century, bloodsports such as bull baiting, bear baiting and cock fighting were common. Bulls brought to market were set upon by dogs as a way of tenderizing the meat and providing entertainment for the spectators; and dog fights with bears, bulls and other animals were often organized as entertainment for both royalty and commoners. Early s were not bred for the handsome visual specimen of today, rather they were bred for the characteristic known as gameness. The pitting of dogs against bear or bull tested the gameness, strength and skill of the dog. These early "proto-staffords" provided the ancestral foundation stock for the Staffordshire Bull Terrier, the American Pit Bull Terrier with the exception of the American Staffordshire Terrier.

These bloodsports were officially eliminated in 1835 as Britain began to introduce animal welfare laws. Since dogfights were cheaper to organize and far easier to conceal from the law than bull or bear baits, bloodsport proponents turned to pitting their dogs one against another instead. Dog fighting was used as both a bloodsport (often involving gambling) and as an effort to continue to test the quality of their stock. For decades afterwards, dog fighting clandestinely took place in pockets of working-class Britain and America. Dogs were released in a pit, and the last dog still fighting (or occasionally, the last dog surviving) was recognized as the winner. The quality of pluckiness or "gameness" was still highly prized, and dogs that gave up during a fight were reviled as "curs". As an important aside, fighting dogs were often handled in the pit during fights, by both their owners and the judge, so were bred to be as trustworthy with humans as they were aggressive towards other dogs.

It is this nefarious history that gives the Staffordshire his celebrated temperament, as in the breed standard of the American Kennel Club: "from the past history of the Staffordshire Terrier, the modern dog draws its character of indomitable courage, high intelligence, and tenacity. This, coupled with its affection for its friends, and children in particular, its off-duty quietness and trustworthy stability, makes it a foremost all-purpose dog." The British colloquial name "Nanny-dog" reflects the breeds' gentle disposition with children.

In the US many were imported by pit fighters and used in their breeding programs to produce the and . Many were imported by British nationals who brought their dogs with them or U.S. expatriates who fell in love with the breed in England and brought it home. Eventually through the campaign of many people the Staffordshire was recognized in the U.S. in 1976. The breed has a loyal following.

The Staffordshire Bull Terrier is a target of breed bans. This belief is due to many people branding Staffordshires under the same name as type dogs. The German government tried to ban the breed in September 2000 across the EU, but were stopped by representatives from the British Kennel Club.Fact|date=May 2008

They were banned in the province of in August, 2005.

The Netherlands: BSL ban lifted!On Monday, June 9 2008, the Dutch Minister of Agriculture, Gerda Verburg, announced to the parliament that the rule banning pit bulls in the Netherlands would be lifted. After fifteen years, it has been found that the ban has been ineffective. The ban had been imposed in 1993, however, as Gerda Verburg, pointed out, there has been no decrease in the number of biting incidents during the fifteen years in which the ban has been in place.