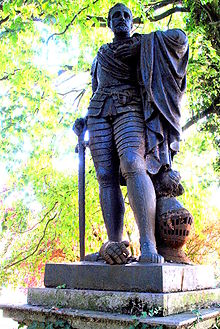 Statue of Lamoral, Count of Egmont, before the castle of Egmont in Zottegem 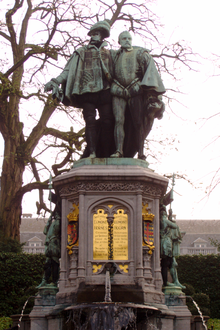 Lamoral, Count of Egmont, Prince of Gavere (November 18, 1522 – June 5, 1568) was a general and statesman in the Habsburg Netherlands just before the start of the Eighty Years' War, whose execution helped spark the national uprising that eventually led to the independence of the Netherlands.[1]

The Count of Egmont headed one of the wealthiest and most powerful families in the Low Countries. Paternally, a branch of the Egmonts ruled the sovereign duchy of Guelders until 1538. Lamoral was born in La Hamaide near Ellezelles. His father was John IV of Egmont, knight in the Order of the Golden Fleece. His mother belonged to a cadet branch of the House of Luxembourg, and through her he inherited the title prince de Gavere.[2] During his youth, he received a military education in Spain. In 1542, he inherited the estates of his elder brother Charles in Holland. His family's stature increased further in 1544 when he wed, in the presence of the Holy Roman Emperor Charles V and of the Archduke Ferdinand I at Spires, the Countess Palatine Sabine of Simmern, whose brother became the Elector Palatine Frederick III.[1]

In the service of the Spanish army, he defeated the French in the battles of Saint-Quentin (1557) and Gravelines (1558). Egmont was appointed stadtholder of Flanders and Artois in 1559, aged only 37.

As a leading Netherlandic nobleman, Egmont was a member of King Philip II of Spain's official Council of State for Flanders and Artois. Together with William, Prince of Orange and the Count of Horn, he protested against the introduction of the inquisition in Flanders by the cardinal Antoine Perrenot Granvelle, bishop of Arras. Egmont even threatened to resign, but after Granvelle left, there was a reconciliation with the king. In 1565, Egmont went to Madrid to beseech Philip II, the king of Spain, for a change of policy in the Netherlands, but met with little more than courtesy.[1]

Soon thereafter, the Iconoclasm started, and resistance against the Spanish rule in the Netherlands increased. As a devout Catholic, Egmont deplored the iconoclasm, and remained faithful to the Spanish king.

After Philip II sent the Duke of Alba to the Netherlands, William of Orange decided to flee Brussels. Having always declined to do anything that smacked of lèse majesté, Egmont refused to heed Orange's warning, thus he and Horn decided to stay in the city. Upon arrival, Alba almost immediately had the counts of Egmont and Horn arrested on charges of treason, and imprisoned them in a castle in Ghent, prompting Egmont's wife and eleven children to seek refuge in a convent. Pleas for amnesty came to the Spanish king from throughout Europe, including from many reigning sovereigns, the Order of the Golden Fleece, and the king's kinsman the Emperor Maximilian II, all to no avail.

On 4 June Egmont and Horn were condemned to death, and lodged that night in the maison du roi. On June 5, 1568, both men, aged only 46 and 44 respectively, were beheaded in the Grand Place in Brussels, Egmont's uncomplaining dignity on the occasion being widely noted. Their deaths led to public protests throughout the Netherlands, and contributed to the resistance against the Spaniards. The Count of Egmont lies buried in Zottegem.[3]

Nowadays, a statue erected on the Petit Sablon / Kleine Zavel Square in Brussels commemorates the Counts of Egmont and Horn, in historical overview usually mentioned together as "Egmond en Hoorne" and hailed as the first leaders of the Dutch revolt, as the predecessors of William of Orange, who grew to importance and obtained the leadership after their execution, and who was assassinated in 1584 in Delft, having succeeded in liberating parts of The Netherlands in the early years of the Eighty Years' War (1568–1648).

Egmont's offices and vast estates were forfeited upon his execution. By inheritance he had been count of Egmont (or Egmond), prince de Gavre and van Steenhuysen, baron de Fiennes, Gaesbeke and La Hamaide, seigneur de Purmerent, Hoogwoude, Aertswoude, Beyerland, Sottenghien, Dondes, Auxy and Baer. Some of these lands were eventually returned to his heirs. By appointment, he was Captain General of the Lowlands under Charles V, knight of the Golden Fleece since 1546, and Imperial Chamberlain. Despite the taint of treason and the family's impoverishment, his niece Louise of Lorraine-Mercouer, was chosen to became the Queen consort of Henry III of France in 1575.

The Count of Egmont is the main character in a play by Goethe, Egmont. In 1810 Ludwig van Beethoven composed an overture and incidental music for a revival of the play.