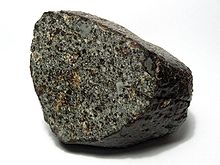 The Ordinary chondrites (sometimes called the O chondrites) are a class of stony chondritic meteorites. They are by far the most numerous group and comprise about 87% of all finds[1]. Hence, they have been dubbed "ordinary".

It is suspected that they are not representative of typical asteroid parent bodies, but rather of a select few which are advantageously placed to send impact fragments to Earth-crossing orbits. Such positions are e.g. near Kirkwood gaps and/or secular resonances in the main asteroid belt. In fact, only the one rather insignificant asteroid 3628 Božněmcová has been identified to have a spectrum close to the ordinary chondrites.

A probable parent body of the H chondrites (comprising about 46% of the ordinary chondrites) is 6 Hebe, but its spectrum is dissimilar due to what is likely a metal impact melt component[2].

It is likely that the ordinary chondrites comprise a detailed sample of but a few select asteroids which happen to have been in the right place at the right time to send many fragments toward Earth at the present moment in solar system history. On the other hand, observations of 243 Ida by the Galileo spacecraft found weathering of Ida's surface, and the reflection spectra of freshly exposed parts of the surface resembled that of OC meteorites, while the older regions matched the spectra of common S-type asteroids.

The ordinary chondrites comprise three mineralogically and chemically distinct groupings. They differ in the amount of total iron, of iron metal and iron oxide in the silicates.