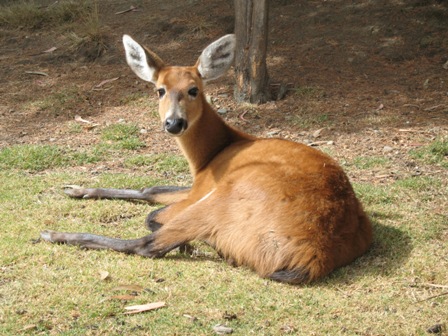 The Marsh Deer, "Blastocerus dichotomus" (Guaraní: "guasu puku"), is the largest from reaching a length of 2 meters and a height of 1.2 meters at the rump. It is found in , , , and . Formerly found through all of tropical South America today it is reduced to small isolated populations at marsh and lagoon zones in the basins of the rivers Paraná and Paraguay as in the Amazonian region of Peru where it is protected in Bahuaja-Sonehe National Park.

It is listed as a vulnerable species, according to , appendix I.

The Marsh Deer lives only in marsh areas, and , usually with the water level reaching half a meter deep. They are swift swimmers. The marshes with their high vegetation density protect them from predators and provide them with food.

They possess very large ears lined with white hairs, reddish brown colored body and long dark legs. The hair turns darker during winter. There are also white marks on the hips and around the eyes. The legs are black below the tarsal as is the muzzle. The tail is of a paler reddish tone than the rest of the body on its upper part and black on the under part. It has a length of 10 to 15 cm in adults.

The claw, which is large in relation to the body, has elastic interdigital membranes which are useful for swimming and walking on marshy surfaces. Only the males possess antlers which are ramified and reach a length of 60 cm. An adult can reach a weight of 150 kg.

They are solitary animals or living in groups with less than 6 individuals with only an adult male. Their main predators are the and the .

It is predominantly nocturnal but its behaviour can change with the seasons and the specific conditions of the surroundings. It doesn't form herds though the offspring remain with the females until mature. Occasionally small groups of up to 5 individuals have been observed. It is not territorial and roams along all of its range searching for food. During the dry season, if it happens, it reduces its mobility to remain near water.

It is herbivorous and eats grasses, fruits and tender roots. Occasionally it invades farmed land when forced to.

Usually the rutting season coincides with summer but can change from animal to animal. Pregnancy lasts about 200 days. The offspring (normally one per female, though occasionally twins are born) are born between October and November. The infant deer are whitish which becomes more adult-like after a year.

The natural predators of the Marsh Deer &ndash; the (locally called onça-pintada or yaguaraté) ("Panthera onca") and the Puma ("Puma concolor")&mdash; have almost completely disappeared from its habitat. The former major threat was poaching for its antlers, but this is now under control. Destruction of its habitat presents nowadays the major threat to marsh deer. The dam at Yacyretá altered an area in which several hundred specimens lived and the draining of marshes for farmland and cattle threaten hundreds of hectares every year in Argentina and Brazil. Contagious diseases from cattle are also a problem, though it has been shown that the deer is not affected by .

* Database entry includes justification for why this species is vulnerable