This article is about the mythological creature. See Amphisbaenia for information on the suborder and Amphisbaena (lizard) for the genus. 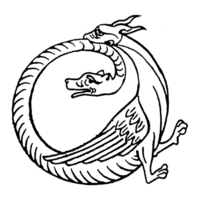 /ˌæmfɪsˈbiːnə/, plural: amphisbaenae), amphisbaina, amphisbene, amphisboena, amphisbona, amphista, amphivena, or anphivena (the last two being feminine), a Greek word, from amphis, meaning "both ways", and bainein, meaning "to go", also called the Mother of Ants, is a mythological, ant-eating serpent with a head at each end. According to Greek mythology, the amphisbaena was spawned from the blood that dripped from the Gorgon Medusa's head as Perseus flew over the Libyan Desert with it in his hand. Cato's army then encountered it along with other serpents on the march. Amphisbaenae fed off of the corpses left behind. The amphisbaena has been referred to by the poets, such as Nicander, John Milton, Alexander Pope, Alfred, Lord Tennyson, and A. E. Housman, and the amphisbaena as a mythological and legendary creature has been referenced by Lucan, Pliny the Elder, Isidore of Seville, and Thomas Browne, the last of whom debunked its existence.

A 15th-century amphisbaena on a misericord in Buckinghamshire

The amphisbaena has a twin head, that is one at the tail end as well, as though it were not enough for poison to be poured out of one mouth.

This early description of the amphisbaena depicts a venomous, dual-headed snakelike creature. However, Medieval and later drawings often show it with two or more scaled feet, particularly chicken feet, and feathered wings. Some even depict it as a horned, dragon-like creature with a serpent-headed tail and small, round ears, while others have both "necks" of equal size so that it cannot be determined which is the rear head. Many descriptions of the amphisbaena say its eyes glow like candles or lightning, but the poet Nicander seems to contradict this by describing it as "always dull of eye". He also says: "From either end protrudes a blunt chin; each is far from each other." Nicander's account seems to be referring to what is indeed called the Amphisbaenia.

The amphisbaena makes its home in the desert.

In ancient times, the supposedly dangerous amphisbaena had many uses in the art of folk medicine and other such remedies. It is said that expecting women wearing a live amphisbaena around their necks would have safe pregnancies; however, if one's goal is to cure ailments such as arthritis or the common cold, one should wear only its skin. By eating the meat of the amphisbaena, one could attract many lovers of the opposite sex, and slaying one during the full moon could give power to one who is pure of heart and mind. Lumberjacks suffering from cold weather on the job could nail its carcass or skin to a tree to keep warm, while in the process allowing the tree to fell easier.

In The Book of Beasts, T.H. White suggests that the creature derives from sightings of the worm lizards of the same name. These creatures are found in the Mediterranean countries where many of these legends originated.

In the Dungeons & Dragons fantasy role-playing game, the amphisbaena is depicted as in traditional myth as a giant serpent with a head at both ends. It travels by grasping one head in the other and rolling like a hoop. The fangs of the amphisbaena are so poisonous that anything successfully bitten by it dies instantly.