The genus Carduelis[1][2] is a large group of birds in the finch family Fringillidae. It includes the greenfinches, redpolls, goldfinches, linnets, the twite, and the non-African siskins. No species of this group ranges far into Africa (where they are replaced by the related genus Serinus), and the centers of evolution were probably Eurasia and North America, with a secondary radiation in the Neotropics.

The interrelationship of these species is complex and contentious. It is fairly certain[vague] that the crossbills are actually derived from proto-redpoll ancestors quite recently, and it was suggested that they should be placed in the same genus, for which the name Loxia would then have priority. On the other hand, the greenfinches (which are apparently the most distinct group) and the redpolls have themselves been separated in distinct genera which might be the best way to express both the actual evolutionary relationships and the evolutionarily significant distinctiveness of the crossbills. The molecular data indicates that the major lineages split in the Late Miocene (Tortonian, roughly 9-7 mya), but it is unable to suggest any one robust arrangement either of the major groups among each other, among the lineages of Carduelis sensu stricto, or indeed among two separate Serinus lineages (Ryan et al., 2004). As only the mitochondrial cytochrome b sequence has hitherto been studied (Arnaiz-Villena et al., 1998), more data is clearly necessary.

Here, the species of Carduelis sensu lato are listed according to current knowledge. The genus Carduelis sensu stricto could conceivably be split further, and in this case only the European Goldfinch and the Citril and Corsican Finch (newly placed in this genus) would remain in Carduelis.

The taxonomy of Loxia is complicated, and the (sub)genus may consist of as few as three species or possibly dozens. The species given below are only those at least provisionally accepted by most scientists. 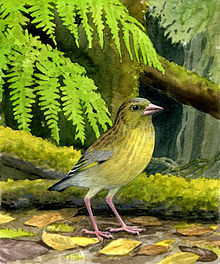 These species may be related to various groups or subgenera currently classified as members of Carduelis but have yet to be studied biochemically:

On December 18, 2009, the Cornell Lab of Ornithology, in its authority as custodian of the Clement's Checklist, made the following statement: "In accord with NACC, here we split the genus Carduelis into four genera: Carduelis (linnets and twites), Spinus (siskins), Acanthis (redpolls), and Chloris (greenfinches). Similar revisions will need to be made with respect to Carpodacus and Serinus, but we defer making those changes until a later date.".[3] This follows a similar change that was published in the 50th supplement to the AOU Checklist of American Birds, " The subgenera Acanthis and Spinus are elevated to genera, and the genus Chloris is split from the genus Carduelis."[4]