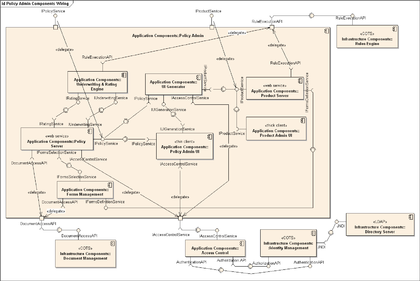 In the Unified Modeling Language, a component diagram depicts how components are wired together to form larger components and or software systems. They are used to illustrate the structure of arbitrarily complex systems.

Components are wired together by using an assembly connector to connect the required interface of one component with the provided interface of another component. This illustrates the service consumer - service provider relationship between the two components.

A delegation connector is a "connector that links the external contract of a component (as specified by its ports) to the internal realization of that behavior by the component’s parts."[1]

The example above illustrates what a typical Insurance policy administration system might look like. Each of the components depicted in the above diagram may have other component diagrams illustrating their internal structure.