Manship began his art studies at the St. Paul School of Art in Minnesota. From there he moved to Philadelphia and continued his education at the Pennsylvania Academy of Fine Arts. Following that he migrated to New York City where he enrolled in the Art Students League of New York, studying anatomy with George Bridgman and modeling under Hermon Atkins MacNeil. From 1905 to 1907 he served as an assistant to sculptor Solon Borglum and spent the two years after that studying with Charles Grafly and assisting Isidore Konti.

In 1909, at Konti's urging, he entered the competition for, and won, the highly sought-after Prix de Rome and shortly thereafter decamped for Rome where he attended the American Academy from 1909 until 1912. While in Europe he became increasingly interested in Archaic art, his own work began to take on some archaic features, and he became more and more attracted to classical subjects. He also developed an interest in classical sculpture of India, and traces of that influence can be observed in his work (see "Dancer and Gazelles" in Gallery). Manship was one of the first artists to become aware of the vast scope of art history being newly excavated at the time and became intensely interested in Egyptian, Assyrian and pre-classical Greek sculpture. 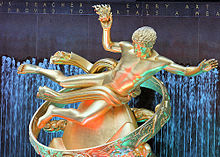 When he returned to America from his European sojourn, Manship found that his style was attractive to both modernists and conservatives. His simplification of line and detail appealed to those who wished to move beyond the Beaux-Arts classical realism prevalent in the day. Also, his view of and use of a more traditional "beauty" as well as an avoidance of the more radical and abstract trends in art made his works attractive to more conservative art collectors. Manship's work is often considered to be a major precursor to Art Deco.

Manship produced over 700 works and always employed assistants of the highest quality. At least two of them, Gaston Lachaise and Leo Friedlander, went on to create significant places for themselves in the history of American sculpture.

Although not known as a portraitist, he did produce statues and busts of Theodore Roosevelt, Samuel Osgood, John D. Rockefeller, Robert Frost, Gifford Beal and Henry L. Stimson. Manship was very adept at low relief and used these skills to produce a large number of coins and medals, one of his later ones being the John F. Kennedy inaugural medal.

Manship was chosen by the American Battle Monuments Commission to create monuments following both the First and Second World Wars. They are located respectively in the American Cemetery at Thiaucourt, France in 1926, and in the military cemetery at Anzio, Italy.

Manship served on the board of the Smithsonian American Art Museum and chaired the board. Manship's extensive papers, maquettes and sculptures are housed in the museum's archives. In 2004 the Smithsonian mounted a retrospective of Manship's career which resulted in a reappraisal of the sculptor's work.

There is a gallery dedicated to the display of Manship's work at the Smithsonian American Art Museum.