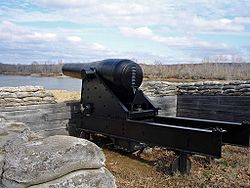 The Columbiad was a large caliber, smoothbore, muzzle loading cannon able to fire heavy projectiles at both high and low trajectories.[1] This feature enabled the columbiad to fire solid shot or shell to long ranges, making it an excellent seacoast defense weapon for its day. Invented by Colonel George Bomford, United States Army, in 1811, columbiads were used by the United States coastal artillery from the War of 1812 until the early years of the 20th Century. Very few columbiads were used outside of the U.S. Army; nevertheless, the columbiad is considered by some as the inspiration for the later shell-only cannons developed by Frenchman Henri-Joseph Paixhans some 30 years later[2]. 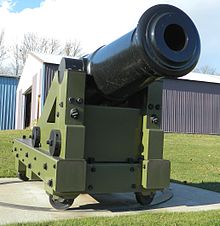 Ten inch Columbiad and center pivot mounting designed by George Bomford as a experimental coastal defense gun. This gun was built in the year 1840, and was one of the first weapons that were later referred to as Columbiads.

A Confederate 10-inch (254 mm) columbiad on a center pivot mount, as in Battery Four at Port Huson, Louisiana. This gun could fire in any direction, and was so effective that Union troops referred to it as the “Demoralizer”.

Just prior to the American Civil War, ordnance officer Thomas Jackson Rodman developed an improved version of the columbiad, which became known by his name. Specifically the Rodman gun was designed to reduce cracking and other weaknesses found in such large iron castings. The process involved ensured the iron cooled evenly from the inside out, and resulted in what we might call today a "soda bottle" shaped casting with smooth, tapered exterior. The "Rodman" process also allowed the manufacture of much larger bore columbiads.

Between 1858 and the end of the Civil War, Northern foundries produced eight-inch (203 mm) , ten-inch (254 mm) , fifteen-inch (381 mm) and twenty-inch Rodman style columbiads. The smaller bore columbiads shared similar range factors to the older weapons, but the fifteen-inch (381 mm) models weighed over 25 tons and could fire 400 pound projectiles out to 5,000 yards (4,600 m). The monster twenty-inch model weighed over 60 tons but could range to over 5 miles (8.0 km). Very few of the largest types were built, and none were fired in anger during the war.

The Confederate States also used columbiads extensively, mostly stocks captured from Federal arsenals at the time of secession. These acquitted themselves well against early ironclad warships. In addition, the Confederates produced limited quantities of eight-inch (203 mm) and ten-inch (254 mm) columbiads without the Rodman process; these could not withstand sustained use. The Confederates also rifled some columbiads in an effort to improve weapon performance.

After the Civil War, many columbiads remained in place at seacoast fortifications around the U.S. In the late 1870s several were rifled and tested for use against modern steel clad ships, with poor results. Strapped for funding, the post-war Army continued to carry smoothbore columbiads on inventory lists until after the Spanish-American War, when modern breech-loading rifled cannon replaced them. Today many columbiads are on display at Federal and state parks commemorating the 19th-century seacoast fortifications. Still others "guard" courthouses around the United States.

In Jules Verne's novel From the Earth to the Moon, a giant columbiad space gun is constructed in Tampa, Florida after the American Civil War, with the purpose of striking the Moon. Although the cannon is originally designed to fire a hollow aluminum ball, a bullet-shaped projectile is later designed with the purpose of carrying people. It is now known that neither concept is viable using such a cannon.

This fictional columbiad is made of cast iron six feet thick, is 900 feet (274 m) long, and has a bore with a diameter of nine feet. It weighs more than 68,000 short tons (61,700 metric tons or 60,700 long tons) and is therefore cast directly in the ground, rather than being mounted on rails. The cannon is then loaded with 400,000 pounds (180,000 kg) of "pyroxyle" (gun cotton) to give the projectile sufficient velocity to leave Earth's atmosphere and reach the Moon.[4]

A vastly scaled down depiction of this fictional cannon was built as a launch cannon for the French version of Space Mountain at Disneyland Paris. Originally named "Space Mountain: De la Terre à la Lune", the ride was loosely based on Verne's novel, and the attraction's exterior was built using a Verne-era retro-futuristic influence.