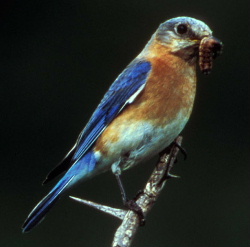 The bluebirds are medium-sized, mostly insectivorous or omnivorous s in the genus "Sialia" of the thrush family Turdidae.

These are one of the relatively few thrush genera to be restricted to the . As the name implies, these are attractive birds with blue, or blue and red, plumage. Female birds are less brightly colored than males, although color patterns are similar and there is no noticeable difference in size between sexes.

Bluebirds are territorial, prefer open grassland with scattered trees and are cavity nesters (similar to many species of ). Bluebirds can typically produce between two and four broods during the spring and summer (March through August in the ). Males identify potential nest sites and try to attract prospective female mates to those nesting sites with special behaviors that include singing and flapping wings, and then placing some material in a nesting box or cavity. If the female accepts the male and the nesting site, she alone builds the nest and incubates the eggs.

Predators of young bluebirds in the nests can include snakes, cats and raccoons. Non-native bird species competing with bluebirds for nesting locations include the and , both of which kill adult bluebirds sitting on their nests along with the young and eggs in order to claim the nesting site. [ [http://elibrary.unm.edu/sora/JFO/v055n03/p0378-p0380.pdf "House Sparrows Kill Eastern Bluebirds"] by Patricia Adair Gowaty in [http://elibrary.unm.edu/sora/JFO/index.php Journal of Field Ornithology] , Volume 55, Number 3, Summer, 1984, pp. 378-380.]

Bluebirds are attracted to platform bird feeders, filled with grubs of the darkling beetle, sold by many online bird product wholesalers as s. Bluebirds will also eat raisins soaked in water. In addition, in winter bluebirds use backyard heated birdbaths.

By the 1970s, bluebird numbers had declined by estimates ranging to 70% due to unsuccessful competition with s and , both , for nesting cavities, coupled with a decline in habitat. However, in late 2005 Cornell University's Laboratory of Ornithology reported bluebird sightings at many locations in the southern U.S. as part of its yearly , a strong indication of the bluebird's return to the region. This upsurge can largely be attributed to a movement of volunteers establishing and maintaining bluebird trails.

Bluebirds are featured in several songs.
* recorded a McCartney composition titled "Bluebird" on their 1973 album "". The narrator/singer refers to himself metaphorically as a bluebird in the song's lyrics.
* proclaimed that there will be "Bluebirds Over The White Cliffs Of Dover" in her popular war-time melody. Bluebirds would never actually appear in Europe though - the song is instead using the image of the .
* in "" from the equally legendary "The Wizard of Oz", proclaimed her belief that "If happy little bluebirds fly above the rainbow, why oh why can't I".
*Disney's film "" had the line "Mr. Bluebird on my shoulder" in the song titled "."
*Sailors used to tattoo the image of a bluebird on their chests for every 5,000 miles logged at sea. [ [http://www.thetattoocollection.com/history_of_tattoos.htm History of Tattoos] ]
*'s and 's 1966 composition "The Far East Suite" features the tune "Bluebird of Delhi", in which 's figures prominently as a musical imitation of the bluebird's song Strayhorn heard outside his hotel room in Delhi.
* and others sang "Blue Skies" (Blue skies Smiling on me / Nothing but blue skies Do I see / Bluebirds Singing a song / Nothing but blue skies From now on.)