The Description de l'Égypte (English: Description of Egypt) was a series of publications, appearing first in 1809 and continuing until the final volume appeared in 1829, which offered a comprehensive scientific description of ancient and modern Egypt as well as its natural history. It is the collaborative work of about 160 civilian scholars and scientists, known popularly as the savants, who accompanied Napoleon's expedition to Egypt in 1798 to 1801 as part of the French Revolutionary Wars, as well as about 2000 artists and technicians, including 400 engravers, who would later compile it into a full work.

The full title of the work is Description de l'Égypte, ou Recueil des observations et des recherches qui ont été faites en Égypte pendant l'expédition de l'armée française (English: Description of Egypt, or the collection of observations and research which was made in Egypt during the expedition of the French Army).

Approximately 160 civilian scholars and scientists, many drawn from the Institut de France, collaborated on the Description. Collectively they comprised the Commission des Sciences et Arts d'Égypte. About a third of them would later also become members of the Institute of Egypt.

In late August 1798, on the order of Napoleon, the Institute of Egypt (l'Institut d'Égypte) was founded in the palace of Hassan-Kashif on the outskirts of Cairo, with Gaspard Monge as president.[1] The structure of the institute was based on the Institut de France. The institute housed a library, laboratories, workshops, and the savants' various Egyptian collections. The workshop was particularly important, supplying both the army as well as the servants with necessary equipment. Many new instruments were constructed as well, to replace those lost during the sinking of the French fleet in August 1798 at Aboukir Bay (Battle of the Nile) and the Cairo riot of October 1798.

One of the goals of the Institute was to propagate knowledge. To this end, the savants published a journal, La Decade Egyptienne, as well as a newspaper, the Courier de L'Egypte, which disseminated information about the French occupation and the activities of the French army, the Commission des Sciences et Arts d'Égypte, and the Institute itself.

Plate 87, "Views of Qait Bey Fortress and the Diamant Rock", published in the Panckoucke edition of 1821-9

The vision of a single comprehensive publication amalgamating all that the French discovered in Egypt was conceived already in November 1798, when Joseph Fourier was entrusted with the task of uniting the reports from the various disciplines for later publication. When the French army left Egypt in 1801, the savants took with them a large quantities of unpublished notes, drawings, and various collections of smaller artifacts that they could smuggle unnoticed past the British.

In February 1802, at the instigation of Jean Antoine Chaptal, the French Minister of the Interior, and by decree of Napoleon, a commission was established to manage the preparation of the large amount of data for a single publication. The final work would draw data from the already-published journal La Decade, the newspaper Courier de L'Égypte, the four-volume Mémoires sur l'Égypte (an expansion of the La Decade journal, published by the French government during and after the Egyptian campaign) and an abundance of notes and illustrations from the various scholars and scientists. The huge volume of information to be published meant adopting an apparently haphazard modus operandi: when sufficiently many plates or text on a particular subject were ready, the information was published. Despite this, publication of the first edition took over 20 years.

A second edition (known as the Panckoucke edition) was published by Charles Louis Fleury Panckoucke. The text was expanded in more volumes and printed in a smaller formats, new pulls were taken from the plates, and these were bound with many of the large format plates folded in the smaller format volumes. 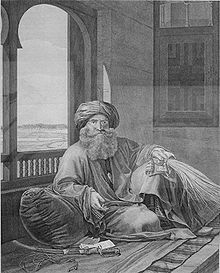 The typographical quality of the texts, the beauty of engravings, and the unusual formats (the Mammutfolio is 1m x .81m) makes Description de l'Égypte an exceptional work.

The first edition usually consists of nine volumes of text, one volume with description of the plates and ten volumes of plates. Two additional volumes in Mammut size (also called Elephant plates) contain plates from Antiquites and Etat Moderne and finally one volume of map plates (Atlas), making for twenty-three volumes in all. Variants in the number of volumes does exist.

The second edition usually consists of thirty-seven volumes, with twenty-four volumes bound in twenty-six books (volume eighteen is a volume split in three books) of text, volume number ten being the description of the plates and ten volumes of plates, plus one volume of maps. The second edition was made at less cost, and is in black and white; the frontispiece, however, is rendered in full color (the exact reverse of the first edition, in which the frontispiece is black and white while the rest is color).

The ten volumes of plates consists of 894 plates, made from over 3000 drawings, most of them located in Histoire Naturelle volume I and II. Some of these plates contain over 100 individual engravings of flora or fauna on a single plate. 38 of the plates are hand coloured. Some variants of the work may contain a few more plates; example Bernard J. Shapero Rare Books list a 38 volume second edition with 909 plates.

The plates have been republished partly or in full if different works, most notable by Taschen GmbH since 1995, which is a complete reproduction of the 10 volumes of plates, though not the 52 plates of the atlas volume. 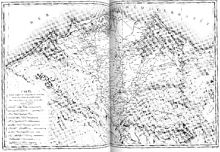 Map of Lower Egypt during the expedition of Napoleon, to be used for the report on the Canal between two seas.

The influence of this work on the nascent field of Egyptology, in every country to which it was sent, is difficult to gauge. At the same time, country-specific studies of the work's reception have been written.[2] While a colossal achievement and one frequently referenced in major publications concerning Egypt and its history, the work's limitations quickly became apparent.[citation needed]

The general conception and often-repeated idea that this is a unique and unprecedented work is inaccurate.[citation needed] There are several works from the 18th century and even 17th century that do much the same as Description de l'Égypte, on a smaller scale. Works such as John Greaves, Pyramidographia (1646), Bernard de Montfaucon's, 10 volume L'Antiquite expliquee et representee en figures (1719–1724), which reproduces, methodically grouped, all the ancient monuments and devoted a notable amount to Egyptian objects, Benoît de Maillet, Description de l'Égypte (1735), Richard Pococke, A Description of the East and Some Other Countries (1743), Frederic Louis Norden, Voyage d'Egypte et de Nubie (1755) and Carsten Niebuhr's highly influential two volume Reisebeschreibung von Arabien und anderen umliegenden Ländern (1774 & 1778), can be seen as mini Description de l'Egypte in their own right, and their literate and pictorial influence might actually be greater than Description de l'Egypte, as they stood uncontested and often uncorrected for many more years.[citation needed]

The very long time it took to publish this work meant that a large part of it, at least the text, though near encyclopaediac in nature, was quickly out of date once it arrived in the hands of people interested in these matters.[citation needed] This was not notable for the description of modern Egypt in the work; however, for the description of ancient Egypt it was. The text is written without the knowledge of how to read hieroglyphics, and the work represents the last major work to be written before the decipherment of the hieroglyphic script, which would slowly become available, just as the first volumes of the large expanded text of the second edition, were printed. The root for the text is found 20 years earlier, and not only did a lot happen in those 20 years, but soon, Jean-François Champollion found the way to read hieroglyphs. Though Champollion’s Grammaire egyptienne, published posthumously in 1836, was not widely accepted until years later, the text of Description de l'Egypte would, in a decade or two, become largely obsolete.[citation needed]

Another aspect is its accessibility. The low number of copies made (~1000), its high price, and its very large physical size made the work accessible practically only to the very elite of society at that time. Even today, finding a complete copy (text and drawings) is not easy. Only major libraries or state libraries are in the possession of such and a complete reproduction or translation into other languages has, to the best of knowledge, never been done.

All this should be seen in stark contrast to Karl Richard Lepsius's 12 volume masterpiece Denkmaeler aus Aegypten und Aethiopien (1849–1859), which to this day is quoted repeatedly as both source and authority on various ancient Egyptian matters and is considered the earliest reliable publications on a large selection of monuments.[citation needed]

There appear to be several variants of these editions, especially the first edition, containing one or more extra volumes. For instance, the Lauinger Library exhibition (Georgetown University Library), November 2000 - January 2001, lists a copy of a first edition presented to Bernardino Drovetti, the French consul general in Egypt from 1802–1814 and 1821–1826, as having 29 volumes, while a "standard" volume contains 23 (20 plus 3 Mammutfolio).

The geographical volume (which contains maps) was not printed before 1828, even though the volumes are dated 1818 and 1826 respectively. All volumes dated 1809 were first printed in 1810.