Microgeneration is the small-scale generation of heat and power by individuals, small businesses and communities to meet their own needs, as alternatives or supplements to traditional centralized grid-connected power. Although this may be motivated by practical considerations, such as unreliable grid power or long distance from the grid, the term is mainly used currently for environmentally-conscious approaches that aspire to zero or low-carbon footprints[citation needed].

In addition to the electricity production plant (e.g. wind turbine, solar panel, ...), infrastructure for energy storage and power conversion and a hook-up to the regular electricity grid is usually needed and/or foreseen. Although a hookup to the regular electricity grid is not essential, it helps to decrease costs by allowing financial recompensation schemes. In the developing world however, the start-up cost for this equipment is generally too high, thus leaving no choice but to opt for alternative set-ups.[2] 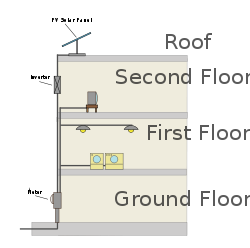 The whole of the equipment required to set up a working system and for an off-the-grid generation and/or a hook up to the electricity grid herefore is termed a balance of system[3] and is composed of the following parts with PV-systems:

A major issue with off-grid solar and wind systems is that the power is often needed when the sun is not shining or when the wind is calm, this is generally not required for purely grid-connected systems:

For converting DC battery power into AC as required for many appliances, or for feeding excess power into a commercial power grid:

Usually, in microgeneration for homes in the developing world, a prefabricated house-wiring systems (as wiring harnesses or prefabricated distribution units) is used instead .[6] Simplified house-wiring boxes, known as wiring harnesses can be simply bought and drilled in the wall without requiring much knowledge on the wiring itself. As such, even people without technical expertise are able to install them. In addition, they are also comparatively cheap and offer safety advantages.[7] 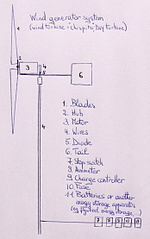 With wind turbines, hydroelectric plants, ... the extra equipment needed [8][9][10][11] is more or less the same as with PV-systems (depending on the type of wind turbine used ,[12] yet also include:

A new wind energy technology is being developed that converts energy from wind energy vibrations to electricity. This energy, called Vibro-Wind technology, can use winds of less strength than normal wind turbines, and can be placed in almost any location. The vibro-wind setup is also more economically viable.

A prototype consisted of a panel mounted with oscillators made out of pieces of foam. The conversion from mechanical to electrical energy is done using a piezoelectric transducer, a device made of a ceramic or polymer that emits electrons when stressed. The building of this prototype was led by Francis Moon, professor of mechanical and aerospace engineering at Cornell University. Moon's work in Vibro-Wind Technology was funded by the Atkinson Center for a Sustainable Future at Cornell. [13]

Turbine-free wind power was showcased in NY Times' 10th Annual Year in Ideas. A video explaining how it works can be found here.

Several microgeneration set-ups are possible. These are:

All set-ups mentioned can work either on a single power plant or a combination of power plants (in which case it is called a hybrid power system).

Note: For safety reasons, there are legal requirements that all domestic grid-connected set-ups must automatically switch off when there is a failure of the mains power supply. This means that they can NOT supply electricity during power cuts. The appropriate supply regulations should be consulted when planning a system. For more about this, see the article on the condition of islanding.

Depending on the set-up chosen (financial recompensation scheme, power plant, extra equipment), prices may vary. According to Practical Action, microgeneration at home which uses the latest in cost saving-technology (wiring harnesses, ready boards, cheap DIY-power plants (e.g. DIY wind turbines), ...) the household expenditure can be extremely low-cost. In fact, Practical Action mentions that many households in farming communities in the developing world spend less than $1 for electricity per month. .[16] However, if matters are handled less economically (using more commercial systems/approaches), costs will be dramatically higher. In most cases however, financial advantage will still be done using microgeneration on renewable power plants; often in the range of 50-90% [17]

In the UK, the government offers both grants and feedback payments to help businesses, communities and private homes to install these technologies. Businesses can write the full cost of installation off against taxable profits whilst homeowners receive a flat rate grant or payments per kW h of electricity generated and paid back into the national grid. Community organisations can also receive up to £200,000 in grant funding.[18]

Microgeneration can dynamically balance the supply and demand for electric power, by producing more power during periods of high demand and high grid prices, and less power during periods of low demand and low grid prices. This "hybridized grid" allows both microgeneration systems and large power plants to operate with greater energy efficiency and cost effectiveness than either could alone. 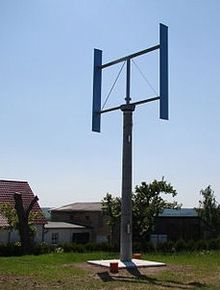 Installing Solar Photovoltaic systems decentralizes the generation of electricity and centralizes the pooling of surplus energy. While they have to be purchased, solar shingles and panels are both available. Initial startup costs more, but saves in the long run. Solar PV panels can run any number of electric appliances including fans, water pumps, food dryers, signs, refrigerators, fencing and even entertainment electronics.[22]

Passive solar heating is another effective method of utilizing solar power. The simplest method is the solar (or a black plastic) bag. Set between 1 and 5 gallons out in the sun and allow to heat. Perfect for a quick warm shower.[23]

The ‘breadbox’ heater can be constructed easily with recycled materials and basic building experience. Consisting of a single or array of black tanks mounted inside a sturdy box insulated on the bottom and sides. The lid, either horizontal or angled to catch the most sun, should be well sealed and of a transparent glazing material (glass, fiberglass, or high temp resistant molded plastic). Cold water enters the tank near the bottom, heats and rises to the top where it is piped back into the home. You can acquire designs through the National Center for Appropriate Technology or design your own.[23]

Wind turbines can be purchased for a wide range of prices. It takes a little more technical knowledge to assemble one yourself but plans are available Mother Earth News.

Ground source heat pumps utilize stable ground temperatures to maintain heat in the pumps. Typically ground source heat pumps have a high initial cost and can’t be created by the average homeowner. This high initial cost means these systems are usually only installed in larger buildings. While environmentally friendly, they require an external power source and are usually powered by non-renewable energy sources.[22]

Biodiesel is an alternative fuel that can power diesel engines and can be used for domestic heating. Numerous forms of biomass, including soybeans, peanuts, and algae (which has the highest yield), can be used to make biodiesel. Recycled vegetable oil (from restaurants) can also be converted into biodiesel.[24]

Biogas is another alternative fuel, created from the waste product of animals. Though less practical for most homes, a farm environment provides a perfect place to implement the process. By mixing the waste and water in a tank with space left for air, methane produces naturally in the airspace. This methane can be piped out and burned, and used for a cookfire.[22]

There is considerable resistance to microgeneration from many governments, local authorities and energy companies. Current incentives discourage energy suppliers and grid operators from bringing energy generation to the point of demand.[citation needed]

Policy-makers are accustomed to an energy system based on big, centralised projects like nuclear or gas-fired power stations, and it will require a change of mindsets and incentives to bring microgeneration into the mainstream. Planning regulations may also require streamlining to facilitate the retrofitting of microgenerating facilities onto homes and buildings.

A number of countries, including Canada (Alberta), the United Kingdom, Germany, Israel[25] and USA have laws allowing microgenerated electricity to be sold into the national grid.

In January 2009, the Government of Alberta‘s Micro-Generation Regulation came into effect. This regulation is a set of rules that allows Albertans to generate their own environmentally friendly electricity and receive credit for any power they send into the electricity grid. See how microgeneration works in Alberta.

The United States has inconsistent energy generation policies across its 50 states. State energy policies and laws may vary significantly with location. Some states have imposed requirements on utilities that a certain percentage of total power generation be from renewable sources. For this purpose, renewable sources include wind, hydroelectric, and solar power whether from large or microgeneration projects. Further, in some areas transferrable "renewable source energy" credits are needed by power companies to meet these mandates. As a result, in some portions of the United States, power companies will pay a portion of the cost of renewable source microgeneration projects in their service areas. These rebates are in addition to any Federal or State renewable-energy income-tax credits that may be applicable. In other areas, such rebates may differ or may not be available.

The UK Government published its Microgeneration Strategy[26] in March 2006, although it was seen as a disappointment by many commentators.[27] In contrast, the Climate Change and Sustainable Energy Act 2006 has been viewed as a positive step.[28] To replace earlier schemes, the Department of Trade and Industry (DTI) launched the Low Carbon Buildings Programme in April 2006, which provides grants to individuals, communities and businesses wishing to invest in microgenerating technologies. These schemes have been replaced in turn by new proposals from the Department for Energy and Climate Change (DECC) for clean energy cashback via Feed-In Tariffs [29] for generating electricity from April 2010 and the Renewable Heat Incentive [30] for generating renewable heat from September 2011.

Feed-In Tariffs are intended to incentivise small-scale (less than 5MW), low-carbon electricity generation. These feed-in tariffs work alongside the Renewables Obligation (RO), which will remain the primary mechanism to incentivise deployment of large-scale renewable electricity generation. The Renewable Heat Incentive (RHI) in intended to incentivise the generation of heat from renewable sources. They also currently offer up to 41.3p per kWh (43.3p per kWh from April 2011) in the Feed-in Tariff plus another 3p for the Export Tariff - an overall figure which could see a household earning back double what they currently pay for their electricity.[31]

Prominent British Politicians who have announced they are fitting microgenerating facilities to their homes include the Conservative party leader, David Cameron, and the Labour Science Minister, Malcolm Wicks. These plans included small domestic sized wind turbines. Cameron, before becoming Prime Minister in the 2010 general elections, had been asked during an interview on BBC One’s The Politics Show on the October 29th 2006 if he would do the same should he get to 10 Downing Street. “If they’d let me, yes,” he replied.[32]

In the December 2006 Pre-Budget Report[33] the Government announced that the sale of surplus electricity from installations designed for personal use, would not be subject to Income Tax. Legislation to this effect has been included in the Finance Bill 2007.[34]

Microgeneration has been popularised by several movies, TV-shows, and magazines. Movies such as The Mosquito Coast, Jericho, The Time Machine, and Beverly Hills Family Robinson have done a great deal in raising interest to the general public. More specialised magazines such as OtherPower and Home Power give more practical advice and guidance.[35] Websites such as Instructables and Practical Action are increasing the popularity of microgeneration by proposing DIY-solutions which can decrease the cost of microgeneration.