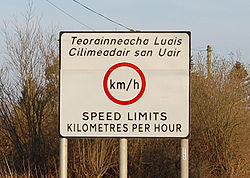 Warning sign about the metric system used in the Republic of Ireland
(border between county Louth and Northern Ireland, where the imperial system is used).

Ireland inherited the imperial System of measurement from Britain, and these units continued to be used after Irish independence. It is principally due to Irish membership in the European Union (EU) that metric units were introduced.[citation needed] Progress towards metrication is mixed. Legally, Ireland has been fully metric since 2005 (albeit with one exception - the pint), but there is also widespread (though decreasing) use of imperial units in everyday conversation.[citation needed]

During the First World War and after the Easter Uprising, Charles A Stanuell, former President of the Statistical and Social Inquiry Society of Ireland published a paper advocating the use of the metric system and a decimal currency in Ireland.[1] Metrication began in the State in the 1970s and by 2005 was almost completed; the only exception being that that the imperial pint (568 ml) is still used in bars. In fact, the term a glass of beer means a 330 ml metric measure of beer and is not a half-pint, which is 284 ml.

All other places must sell liquids measured in millilitres and litres. However most people know their height in feet and inches as well as in metres and centimetres, and their weight in stones and pounds as well as in kilograms.

Distance signs had displayed kilometres since the 1990s but road speed limits were in miles per hour until January 2005, when they were finally changed to kilometres per hour. Since 2005 all new cars sold in Ireland have had speedometers that displayed only kilometres per hour, odometers generally became metric as well.

In 1994, The Public Health Act change agricultural measuresment usage for physical measurements such height and weight of livestock from feet, inches and hundredweights to metres and kilograms. [2]

The metric system is the only system taught in schools. Beginning in 1970, textbooks were changed to metric. Goods in shops are labelled in metric units, but sometimes with imperial equivalents (normally products also sold in the U.K.).

Household items such as bathroom scales, wash soap, clothing, and measuring tapes are sometimes in dual units, especially those also sold in the United Kingdom.

Despite metric height restriction signs being legal since 1981, some bridges in Ireland still have height warning signs in feet and inches only.

Traders in certain sectors have been slow to change to metric units for fear of their prices seeming to be higher than their competitors. For example, as of 2010, floor coverings such as carpets and tiles are commonly priced per square yard, despite it being mandatory to price in metric units. A square metre is about 20% bigger than a square yard, so a metric-pricing trader might seem at first glance to be more expensive than an imperial-pricing competitor.

Northern Ireland, which is part of the United Kingdom, continues to use imperial units for some purposes, such as speed limits, and distances shown on road signs, and certain retail items.