Mayflies are insects which belong to the Order Ephemeroptera (from the Greek ephemeros = "short-lived", pteron = "wing", referring to the brief lifespan of adults). They have been placed into an ancient group of insects termed the Palaeoptera, which also contains dragonflies and damselflies. They are aquatic insects whose immature stage (called "naiad" or, colloquially, "nymph") usually lasts one year in freshwater. The adults are short-lived, from a few minutes to a few days depending on the species. About 2,500 species are known worldwide, including about 630 species in North America. Common names for mayflies include "dayfly", "shadfly", "Green Bay fly", "lake fly", "fishfly" (in the Great Lakes region of North America),[2] "midgee", "canadian soldiers" and "jinx fly".

Eggs are laid on the surface of lakes or streams, and sink to the bottom. Naiads moult 20 to 30 times over a period of a few months up to a year, depending on the species.[3] The naiads live primarily in streams under rocks, decaying vegetation, or in the sediment. Few species live in lakes, but they are among the most prolific. For example, the emergence of one species of Hexagenia was recorded on doppler weather radar along the shores of Lake Erie.[4]

Most species feed on algae or diatoms, but there are a few predatory species. The naiad stage may last from several months to several years, with a number of moults along the way. Most mayfly naiads are distinctive in having seven pairs of gills on the dorsum of the abdomen. In addition, most possess three long cerci or tails at the end of their bodies. Some species, notably in the genus Epeorus, have only two tails. In the last aquatic stage, dark wingpads are visible. Developmentally, these insects are considered hemimetabolous insects. A more casual and familiar term is "incomplete metamorphosis". Mayflies are unique among insects in that they moult one more time after acquiring functional wings (this is also known as the alate stage); this last-but-one winged instar usually lives a very short time, often a matter of hours, and is known as a subimago or to fly fishermen as a dun. Mayflies in this stage are a favourite food of many fish, and many fishing flies are modeled to resemble them. 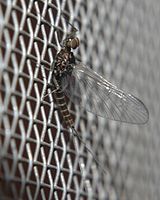 The lifespan of an adult mayfly is very short and varies depending on the species. The primary function of the adult is reproduction; the mouthparts are vestigial, and the digestive system is filled with air.

The wings are membranous, with extensive venation, and are held upright like those of a butterfly. The hindwings are much smaller than the forewings, and may be vestigial or absent. The second segment of the thorax, which bears the forewings, is enlarged, holding the main flight muscles.

Adults have short, flexible antennae, large compound eyes and three ocelli. In most species, the males' eyes are large and the front legs unusually long, for use in locating and grasping females during mid-air mating. In some species, all legs aside from the males' front legs are useless. Uniquely among insects, mayflies possess paired genitalia, with the male having two penises and the female two gonopores. The abdomen is roughly cylindrical, with ten segments and two long cerci at the tip.[1] 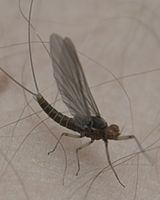 Male subimago of Baetis tricaudatus, possibly the same individual as above

The final molt of the naiad is not to the full adult form, but to a winged subimago that physically resembles the adult, but which is usually sexually immature. The subimagos are generally poor fliers, and typically lack the colouration patterns used to attract mates. The subimago eventually moults to the full adult, making mayflies the only insects where a winged form undergoes moulting.

Like the adult, the subimago stage does not last for long, rarely for more than 24 hours. In some species, it may last for just a few minutes, while the mayflies in the family Palingeniidae have sexually mature subimagos and no true adult form at all.[1] 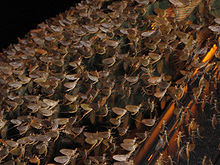 It often happens that all the mayflies in a population mature at once (a hatch), and for a day or two in the spring or fall, mayflies will be everywhere, dancing around each other in large groups, or resting on every available surface. The species Polingenia longicauda hatches in mid-June on the Maros River and the Tisza River in Serbia and Hungary. It is called the tiszavirág in Hungarian and tiski cvet in Serbian. Both names mean "Tisza flower", and the phenomenon is called Tisza blooming. In regions of New Guinea and Africa, mayflies are eaten when they emerge en masse.

The status of most species of mayflies is unknown because many species are only known from the original collection data. Four North American species are believed to be extinct, two of which are listed below:

The International Union for Conservation of Nature (IUCN) red list of threatened species includes one mayfly: Tasmanophlebi lacus-coerulei, the large blue lake mayfly, is a native of Australia and is listed as vulnerable.[5]

Mayflies are a very old group of pterygote insects. Putative fossil stem group representatives (e.g. Syntonopteroidea like Lithoneura lameerrei) are already known from the late Carboniferous. The largest mayfly of all times may have been Bojophlebia prokopi from the Upper Carboniferous of Moravia with a wing span of 45 cm. From the Permian numerous stem group representatives of mayflies are known, which are often lumped into a separate taxon Permoplectoptera (e.g. including Protereismatidae and Misthodotidae). The larvae of Permoplectoptera still had 9 pairs of abdominal gills, and the adults still had long hind wings. Maybe the fossil family Cretereismatidae from the Lower Cretaceous Crato Formation of Brazil also belongs as last offshot to Permoplectoptera. The Crato outcrops otherwise rather yielded fossil specimens of modern mayfly families or the extinct (but modern) family Hexagenitidae. However, from the same locality the strange larvae and adults of the extinct family Mickoleitiidae (order Coxoplectoptera) have been described,[6] which represents the fossil sister group of modern mayflies, even though they had very peculiar adaptations (e.g. raptorial forelegs). The oldest mayfly inclusion in amber is Cretoneta zherichini (Leptophlebiidae) from Lower Cretaceous Siberian amber. In the much younger Baltic amber numerous inclusions of several modern families of mayflies have been found (Ephemeridae, Potamanthidae, Leptophlebiidae, Ametropodidae, Siphlonuridae, Isonychiidae, Heptageniidae, and Ephemerellidae).[7] The modern Genus Neoephemera is represented in the fossil record by the Ypresian[8] species N. antiqua from Washington State.[9]