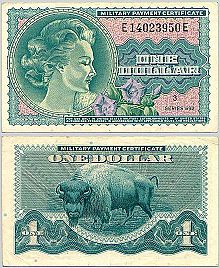 Military Payment Certificates, or MPC, was a form of currency used to pay U.S. military personnel in certain foreign countries. It was used in one area or another from a few months after the end of World War II until a few months after the end of U.S. participation in the Vietnam War -- from 1946 until 1973. MPC utilized layers of line lithography to create colorful banknotes that could be produced cheaply. Fifteen series of MPC were created. However, only 13 series were issued. The remaining two were largely destroyed, although some examples remain.[1] Among the 13 released series a total of 94 notes are recognized. With a few notable exceptions most of them, particularly in circulated condition, can be purchased at low cost.[2]

Military Payment Certificates (MPC) evolved from Allied Military Currency as a response to the large amounts of US Dollars circulated by American servicemen in post-World War II Europe. The local citizens might not trust local currencies, as the future of their governments was unclear. Preferring a stable currency like U.S. dollars, local civilians often accepted payment in dollars for less than the accepted conversion rates. Dollars became more favorable to hold, inflating the local currencies and thwarting plans to stabilize local economies. Contributing to this problem was the fact that troops were being paid in dollars, which they could convert in unlimited amounts to the local currency with merchants at the floating (black market) conversion rate, which was much more favorable to the GIs than the government fixed conversion rate. From this conversion rate imbalance, a black market developed where the servicemen could profit from the more favorable exchange rate.[citation needed]

To reduce profiteering from currency arbitrage, the U.S. military devised the MPC program. MPCs was paper money denominated in amounts of 5 cents, 10 cents, 25 cents, 50 cents, 1 dollar, 5 dollars, 10 dollars, and starting in 1968 20 dollars. MPCs were fully convertible to U.S. dollars upon leaving a designated MPC zone, and convertible to local currencies when going on leave (but not vice versa). It was illegal for unauthorized personnel to possess MPC, and that policy, in theory, eliminated U.S. dollars from local economies. Although actual greenbacks were not circulating, many local merchants accepted MPC on par with US dollars, since they could use them on the black market. This was especially evident during the Vietnam War when the MPC program was at its zenith. To prevent MPC from being used as a primary currency in the host country and destroying the local currency value and economy, MPC banknote styles were frequently changed to deter black marketers and reduce hoarding, as the old style would become worthless. Many veterans can recount a conversion day or C-Day.

C-days in Vietnam were always classified, never pre-announced. On C-day, soldiers would be restricted to base, preventing GIs from helping Vietnamese civilians--especially local bars, brothels, bar girls and other black market people--from converting old MPC to the newer version. Since Vietnamese were not allowed to convert the currency, they frequently lost savings by holding old, worthless MPC. People angry over their MPC loss would sometimes attack the nearest U.S. base the next night in retaliation.[citation needed]

To illustrate the Vietnam War MPC cycle, in mid-1970, a GI could have a friend in the United States mail a $100 bill in standard U.S. currency, take it "downtown" and convert it to $180 MPC, then change the MPC to South Vietnamese piastres at double the legal rate. The soldier could then have a day shopping, bar hopping, or otherwise spending freely, paying in low-cost local currency, and finishing the day with a hefty profit.

To continue the black market cycle, that $100 greenback would find its way to high-level Vietnamese government officials, especially the corrupt ones, who could travel out of country, where the U.S. currency could be deposited safely (Bangkok, Taipei, or Hong Kong). Rumors also suggested that this hard currency (US dollars), would find its way to North Vietnamese European exchange accounts.

Thirteen series of MPC were issued between 1946 and 1973, with varied designs often compared to Monopoly money due to their colors. After the official end of U.S. participation in the Vietnam War in early 1973, the only place where MPC remained in use was South Korea. In autumn of 1973, a surprise conversion day was held there, retiring MPC and substituting greenbacks. MPC was never again issued, and the concept lay dormant until the late 1990s, when it was revived somewhat in the form of a Stored Value Card system, presently used by U.S. armed forces in Iraq.