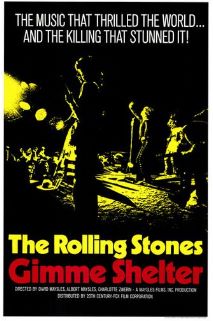 The documentary is associated with the movement of the 50s and 60s. The Maysles Brothers, who directed it, are strong figures of the era. The movement revolves around the philosophy of being a '' filmmaker. Rather than investigating a subject matter through such documentary techniques as , reconstruction and , direct cinema simply records events as they unfold naturally and spontaneously - like a ''.

The film depicts some of the concert, later featured on the live album, "Get Yer Ya-Ya's Out!", as well as the photography session for the cover, featuring and a donkey. It also shows the Stones at work in , recording "Wild Horses". Performances documented in the film include Ike and (who were one of the Rolling Stones' opening acts for the 1969 tour), the , and .

Much of the film chronicles the behind-the-scenes dealmaking that took place to make the free Altamont concert happen. The action then turns on the concert itself at the , the security for which was provided by the . As the day progressed, with drug-taking and drinking by the Angels and members of the audience, the mood turned ugly. Fights broke out during performances by (at one point lead singer was knocked out by a Hells Angel) and . The opted not to play after learning of the incident with Balin. By the time the Stones hit the stage, the crowd was especially restless.

The Stones opened with "". It was near the end of their set, during "", that a member of the audience, 18 year old , pulled out a revolver in the course of a melee near the stage, and was stabbed to death by a member of the Angels.

Eric Saarinen (grandson of ) was the camera operator who (unknowingly) caught Meredith Hunter's stabbing on film. The film sequence clearly shows the silhouette of a handgun in Hunter's hand as a member of the Hells Angels enters from the right, grabs and raises the gun hand, turning Hunter around and stabbing him at least twice in the back before pushing the victim off camera.

A young was a camera operator for the Altamont concert. However, his camera jammed after shooting about convert|100|ft|m of film, and none of his footage was incorporated in the final cut.Fact|date=May 2007

*"The Other Side of This Life" (at Altamont)