A box set (also known as a boxed set) is a compilation of various musical recordings, films, television programs, or other collection of related items that are contained in a box. 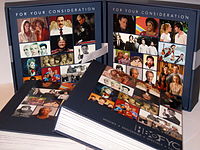 In the case of music, box sets are usually made up of three or more discs, covering a broad range of the music of a given artist or genre. Artists and bands with an extremely long and successful career often have anthology or "essential" collections of their music released as box sets. These often include rare and never-before-released tracks. Some box sets collect together previously released singles or albums by a music artist, and often collect the complete discography of an artist such as Pink Floyd's Oh, by the Way. The box set The Aeroplane Flies High, released in 1996 by The Smashing Pumpkins, is an expanded collection of the singles from their album Mellon Collie and the Infinite Sadness.

Other music box sets focus on a compilation of different artists from a particular genre such as Big Band jazz, 1960s rock and roll, or opera. They generally feature a large collection of various hits from some of the top artists of a particular genre. The scope of such box sets varies widely, with some genre-specific box sets (such as one featuring rock music) focusing on a specific style (for instance, guitar rock or "Summer of Love" music). Two of the best known companies for making box sets are Legacy Recordings and Rhino Records; both have won multiple Grammy Awards. Prior to Rhino and Legacy, companies such as Time-Life Records and Readers Digest also issued box sets.

In rare cases, box sets contain all original material such as In Search of The, a 13-disc set by Buckethead or the Merzbox, a 50-disc set by Merzbow in which 20 of the discs are of new material while the other 30 discs are catalog material. Some box sets become best sellers, such as Led Zeppelin's Led Zeppelin (1990), George Strait's Strait Out of the Box (1995), Nirvana's With the Lights Out (2004) and The Beatles' twin The Beatles Stereo Box Set and The Beatles in Mono discography box sets (2009).

In classical music, box sets often contain e.g. all works of a certain composer or all works in a certain genre, like symphonies or chamber music, performed by a certain orchestra, ensemble or conductor.

Films, television, and other video programs on Blu-ray, DVD and VHS are sometimes sold as box sets. Such a box set might include an entire season or seasons of a popular TV program, a collection of films by a well known director or starring a well known actor/actress, or a collection of films of a particular genre such as horror, sci-fi and westerns. Other criteria for box sets have included all films of a series such as the Star Wars series or the Lord of the Rings trilogy, and a selection of adaptions of a particular author such as Stephen King or Jane Austen. Some box sets contain different versions of one film, as in the case of Blade Runner, and Alien Quadrilogy.

In the field of publishing, well known authors and artists who have written or produced several related books or portfolios of fine art photography or other artistic mediums whose work is considered historically, culturally, or socially significant may have certain works sold as box sets. For example, one can buy box sets of the plays of Shakespeare, collection of J.R.R. Tolkien novels, or Ansel Adams photographic prints.

More recently, the term "digital box set" has been used with items such as music downloads[1] or television streaming,[2][not in citation given] even when no physical box exists.

Box sets can contain collections of items other than music, video, or literary media. Some examples include a box set of basic carpentry tools, a barbecue cooking utensil box set, and a box set of loose-leaf tea varieties. Box sets generally offer a number of items normally sold separately as one set.