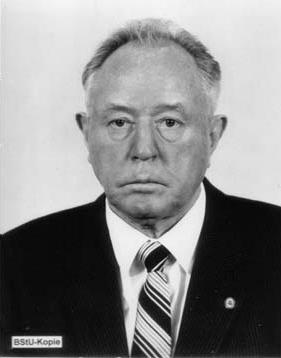 Erich Fritz Emil Mielke (, - , in ) was a German who held the military rank of "" [ [http://www.axishistory.com/index.php?id=6048 Axis History Factbook: Stasi - Ministerium für Staatssicherheit ] ] and was Minister of State Security of the German Democratic Republic from 1957 to 1989.

"I, Erich Mielke, was born on , , in , (). My father was a poor, uneducated woodworker, and my mother died in 1911. Both were members of the and joined the when it was formed in 1918. My stepmother was a and she also belonged to the KPD. My younger brother Kurt and two sisters were Communist sympathisers." [ John Koehler, "The Stasi," page 44.]

Mielke became a member of the German Communist Party during the 1920s and worked as a reporter for a communist newspaper from 1928-1931. He joined the "Parteiselbstschutz" ("Party Self Defense Unit") and took part in street battles against both the and the officials of Germany's . He is also alleged to have shot an SA-Man.

On , Mielke and ambushed and murdered two officers, Captains and Franz Lenck. The act was carried out at the urging of , and was directly supervised by Communist Members of the Reichstag and . After the two policemen were lured to Bülow-Platz by a violent Communist rally, Mielke and Ziemer opened fire on them as they were walking in front of the Babylon Cinema, which was located at the corner of Bülowplatz and Kaiser-Wilhelm-Straße. Captain Lenck was shot in the chest and died before the theater entrance. Paul Anlauf took two bullets in the neck and bled to death with his head cradled in the arms of police Sergeant Max Willig. Captain Anlauf, a widower survived by three daughters, was especially despised by Berlin's Communists as he frequently raided Party Headquarters and obstructed their attempts to illegally hold political rallies without a permit. As a result, he was known among them as "Pig Face".

After the murders, the act was celebrated at the "Lichtenberger Hof", a favorite with the Rot-Front-Bund, where Mielke remarked "Today we celebrate a thing that I have spun!" (German:"Heute wird ein Ding gefeiert, das ich gedreht habe!") [cite web|url=http://home.snafu.de/erich.mielke/Erich_Mielke_/erich_mielke_.html Erich Mielke |title=Erich Mielke - Freund und Genosse (in German)|publisher=Dynamosport.de - Private website on the BFC Dynamo|date=|accessdate=2008-03-30] .

After it was revealed that Sergeant Willig had survived the attack and could identify him, Mielke was smuggled to the where he joined numerous other German Communist exiles in . He was convicted of the murders in a German court. Three other German communists were arrested for these murders, convicted and sentenced to death, among them Communist martyr , who had declared during a planning meeting, "Now we're getting serious... We're going to give 'Pig Face' something to remember us by." [ John Koehler, "The Stasi," pages 38-39]

Mielke would face trial for the murders again, in 1993.

In 1932 Mielke attended the 's Military Political school and later the Lenin School. Due to his record as a reliable who blindly served the system, Mielke survived 's , which decimated Moscow's German community.

From 1936 to 1939 he was sent by Stalin to fight in the as a political officer assigned to the Republican side, using the alias "Fritz Leissner " [cite web|url=http://home.snafu.de/erich.mielke/Erich_Mielke_/erich_mielke_.html Erich Mielke |title=Erich Mielke - Freund und Genosse (in German)|publisher=Dynamosport.de - Private website on the BFC Dynamo|date=|accessdate=2008-03-30] . Walter Janka, a veteran of the Republican forces who remembers him described his career as follows,

During Mielke found himself caught in and was interned as an enemy alien by the . However Mielke's activities during the remainder of the war are disputed, as he was often heard singing Partisan songs with fellow officials. As a result, it has been speculated that Mielke may have escaped from internment and served as a political officer on the Eastern Front.

In 1945 Mielke was returned to Germany by the Soviet authorities as a police inspector, with a mandate to build up a security force which would ensure the dominance of the Communist Party in the Soviet occupation zone of Germany, where he was a member of the of the (SED) from 1950 until his forced retirement in November 1989. From July 1946 to October 1949 he served as vice-president of the Administration of the Interior. From October 1949 to February 1950, Mielke served as head of the Main Administration for the Protection of the People's Economy, the forerunner of the Ministry of State Security (MfS or ""). From 1950-1953 he was state secretary in the MfS, later serving as full State Secretary from 1953-1955. From 1955-1957 he was deputy minister of state security.

Erich Mielke was also a fitness enthusiast, a non-smoker and drank very little. He was a keen hunter and owned a large area of ground where he would hunt animals with other top and officials.

Mielke headed the from 1957 until the fall of the in 1989. His network of 85,000 full-time domestic spies and 170,000 'voluntary' informers kept tabs on millions of people. So many people collaborated with the Stasi that when the records were opened, it was discovered that in every public building, at least one of its members kept the Stasi informed about everything that happened within it. On his orders, and with his full knowledge, Stasi officers also engaged in arbitrary arrest, ping, brutal of political , and the inhumane imprisonment of tens of thousands of s. On his personal responsibility the MfS launched the counter attacks by the Stasi against the dissident and his book "Die Alternative. Zur Kritik des 'real existierenden Sozialismus'" and those who supported, discussed and published his work. Mielke was one of the most powerful – and most hated – men in East Germany, feared even by members of his own ministry.

On 7 November 1989, Mielke resigned, along with all of the other members of the GDR government (the Council of Ministers - " der DDR)", in response to the changing political and social situation in the GDR in the fall of 1989. Six days later, on 13 November 1989, Mielke was at the center of one of the most famous televised incidents in German history: when he addressed the members of the GDR parliament "()" as "comrades", as he was accustomed to doing, some angry non-SED members asked him to refrain from calling them that. The shattered Mielke first tried to justify his wording, "That is a question of formality" and then apologized, declaring: "But I love – I love all – all people..." (German: „Ich liebe doch alle Menschen!“) which was met with laughter from the crowd. On 18 November 1989, following the "'s" decision a day earlier to rename the MfS as the "Amt für Nationale Sicherheit" (AfNS - Office for National Security), Mielke's tenure in office finally ended when "" was elected by the "Volkskammer" as the director of the AfNS.

Mielke served as chairman of , the sports club of the country's security forces. He acted as the powerful patron of football club helping his favorite side by manipulating the outcome of the team's games through various means to ensure its dominance of the first division . The team won ten consecutive titles from 1979 to 1988 assisted by crooked referees, unfair player transfers from other teams and assorted other unsportmanlike practices. Dynamo was reviled by many of the citizens of Berlin and the cheating was so blatant that it incurred the unofficially expressed displeasure of the country's ruling Politburo.

On 3 December 1989, Mielke was expelled from membership in the SED. On 7 December 1989, he was detained by GDR authorities and placed in "investigative custody" "(Untersuchungshaft)" as he was charged with "damaging the national economy" "(Schädigung der Volkswirtschaft)."

After German reunification in October 1990, Mielke was arrested and charged with the 1931 murders of police officers Anlauf and Lenck. Much of the evidence used in the trial was taken from the files of the original investigation, which were found in Mielke's personal safe after the dissolution of the MfS. Despite attempts by his lawyers to get the charges dropped by claiming the evidence had been extracted under torture, he was convicted of both murders and in October 1993 he was sentenced to six years imprisonment. He was paroled after less than two, and in 1998 all further legal action against him was ended on the grounds of his poor health.

Mielke died on aged 92 in a nursing home. About 100 people reportedly attended the funeral. His remains are buried in the in . Mielke's unmarked grave is outside the memorial section established at the entrance in 1951 by East German leaders for communist heroes.