The National Union for the Total Independence of Angola (Portuguese: União Nacional para a Independência Total de Angola) (UNITA) is the second-largest political party in Angola. Founded in 1966, UNITA fought with the Popular Movement for the Liberation of Angola (MPLA) in the Angolan War for Independence (1961–1975) and then against the MPLA in the ensuing civil war (1975–2002).

The war was one of the most prominent Cold War proxy wars, with UNITA receiving military aid from the United States and South Africa while the MPLA received support from the Soviet Union and its allies.[1]

UNITA was led by Jonas Savimbi from its foundation until his death in 2002. His successor as President of UNITA is Isaías Samakuva. Following Savimbi's death, UNITA abandoned armed struggle and participated in electoral politics. The party won 16 out of 220 seats in the 2008 parliamentary election.

Jonas Savimbi and Antonio da Costa Fernandes founded UNITA on March 13, 1966 in Muangai in Angola's Moxico province, in Portuguese Angola (during the Estado Novo regime). UNITA launched its first attack on Portuguese colonial authorities on December 25 that same year.[2] 200 other delegates were present in the event.[1]

After the Portuguese withdrawal from Angola in 1974-75 and the end of their colonial rule, the MPLA and UNITA splintered, and civil war began as the movements clashed militarily and ideologically. MPLA leader Agostinho Neto became the first president of post-colonial Angola. Backed by Soviet and Cuban money, weapons and troops, the MPLA defeated the FNLA militarily and forced them largely into exile. UNITA also was nearly destroyed in November 1975, but it managed to survive and set up a second government in the provincial capital of Huambo. UNITA was hard-pressed but recovered with South African aid and then was strengthened considerably by U.S. support during the 1980s. The MPLA's military presence was strongest in Angolan cities, the coastal region and the strategic oil fields. But UNITA controlled much of the highlands interior, notably the Bié Plateau, and other strategic regions of the country. Over 500,000 Angolans died in the civil war.

In the 1980s and early 1990s, Savimbi sought out vastly expanded relations with the U.S. He received considerable guidance from the Heritage Foundation, an influential conservative research institute in Washington, D.C. that maintained strong relations with both the Reagan administration and the U.S. Congress. Michael Johns, the Heritage Foundation's leading expert on Africa and Third World Affairs issues, visited Savimbi in his clandestine southern Angolan base camps, offering the UNITA leader both tactical military and political advice.

In perhaps Savimbi's greatest accomplishment in his relations with the U.S., U.S. conservatives convinced President Ronald Reagan to meet with Savimbi at the White House in 1986. While the meeting itself was confidential, Reagan emerged from it with support and enthusiasm for Savimbi's efforts, stating that he could envision a UNITA "victory that electrifies the world," suggesting that Reagan saw the outcome of the Angolan conflict as critical to his entire Reagan Doctrine foreign policy, consisting of support for anti-communist resistance movements in Central America, Southeast Asia, and elsewhere.

Under Savimbi's leadership, UNITA proved especially effective militarily before and after independence, becoming one of the world's most effective armed resistance movements of the late 20th century. Savimbi's very survival in Angola in and of itself was viewed as an incredible accomplishment, given the number of well-planned assassination attempts, aided by extensive Soviet, Cuban, and East German military troops, advisors and support, that he survived.

As Savimbi gained ground despite the forces aligned against him, American conservatives pointed to his success, and that of Afghan mujahideen, both of which, with U.S. support, were successfully opposing Soviet-sponsored governments, as evidence that the U.S. was beginning to gain an upper hand in the Cold War conflict and that the Reagan Doctrine was working. Critics, on the other hand, responded that the support given Savimbi and the Afghan mujahideen was inflaming regional conflicts at great expense to these nations. Furthermore, UNITA, like the mujahideen and the Contras, was criticized for human rights abuses.

Fighting in Angola continued until 1989, when, with UNITA advancing militarily, Cuba withdrew its support, removing the 50,000 troops that it had dispatched to Angola to fight Savimbi's UNITA. With many commentators and foreign policy specialists seeing that the Cold War might be drawing to an end, Savimbi's U.S. support, which had been strong, began to be questioned, with some in Congress urging the end of U.S. support for UNITA. Matters were further complicated by repeated reports that Soviet General Secretary Mikhail Gorbachev had raised U.S. support for UNITA in several formal and informal summit meetings with President George H. W. Bush, placing further pressure on the U.S. to end its support for UNITA.

A UNITA sticker, issued for its 20th anniversary celebrations in 1986. The sticker carries the UNITA symbol and the slogan 'Socialism - Negritude - Democracy - Non-Alignment'

As the war began to include both military and diplomatic components, Johns and leading U.S. conservatives urged Savimbi to make a ceasefire contingent on the MPLA's agreement to "free and fair elections."[3] When the UNITA demand was originally rebuffed by the MPLA, Savimbi vastly intensified his military pressure, while alleging that the MPLA was resisting free and fair elections because they feared a UNITA electoral victory. Meanwhile, an agreement was reached that provided for the removal of foreign troops from Angola in exchange for the independence of Namibia from South Africa. In Angola, however, Savimbi told Johns and conservative leader Howard Phillips that he had not felt adequately consulted on the negotiations or agreement and was in opposition to it. "There are a lot of loopholes in that agreement. The agreement is not good at all," Johns reported Savimbi telling both of them during a March 1989 visit with Savimbi in Angola."[4]

A ceasefire ultimately was negotiated and MPLA leader José Eduardo dos Santos and the MPLA's Central Committee rejected its Marxist past and agreed to Savimbi's demand for free and fair elections, though UNITA and its supporters viewed the promises skeptically, especially because the MPLA's relations with the former Soviet Union remained strong. 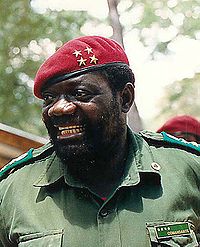 Following the 1991 Bicesse Accords, signed in Lisbon, United Nations-brokered elections were held, with both Savimbi and dos Santos running for President in 1992. Failing to win an overall majority in the first round of balloting, and then questioning the election's legitimacy, Savimbi and UNITA returned to armed conflict. Fighting resumed in October 1992 in Huambo, quickly spreading to Angola's capital, Luanda. It was here that Jeremias Chitunda, UNITA's long-time vice-president and other UNITA officials were killed while fleeing the city. Following Chitunda's death, UNITA defensively moved their base from Jamba to Huambo. Savimbi's 1992 decision to return to combat ultimately proved a costly one, with many of Savimbi's U.S. conservative allies urging Savimbi to contest dos Santos electorally in the run-off election. Savimbi's decision to forego the run-off also greatly strained UNITA's relations with then U.S. President George H. W. Bush.

As Savimbi resumed fighting, the U.N. responded by implementing an embargo against UNITA through United Nations Security Council Resolution 1173. The UN-commissioned Fowler Report detailed how UNITA continued to finance its war effort through the sales of diamonds (later to be known as blood diamonds)[5] and resulted in further sanctions in the form of United Nations Security Council Resolution 1295 and action to end to the trade in blood diamonds through the Kimberley Process Certification Scheme. The U.S. government, which had never recognized the legitimacy of the MPLA, finally recognized the Angolan government, further alienating Savimbi. After failed talks in 1993 to end the conflict, another agreement, the Lusaka Protocol, was implemented in 1994 to form a government of national unity. In 1995, U.N. peacekeepers arrived. But UNITA broke away from the Lusaka agreement in 1998, citing violations of it by the MPLA. The following year, in 1999, a MPLA military offensive damaged UNITA considerably, essentially destroying UNITA as a conventional military force and forcing UNITA to return to more traditional guerilla tactics.

The Angolan civil war ended only after the death of Savimbi, who was killed in an ambush on February 22, 2002. His death was shocking to many Angolans, many of whom had grown up during the Angolan civil war and witnessed Savimbi's ability to successfully evade efforts by Soviet, Cuban and Angolan troops to kill him.

Six weeks following Savimbi's death, in April 2002, UNITA agreed to a ceasefire with the government. Under an amnesty agreement, UNITA soldiers and their families, comprising roughly 350,000 people, were gathered in 33 demobilisation camps under the "Program For Social and Productive Reintegration of Demobilized and War Displaced People". In August, 2002, UNITA officially gave up its armed wing, and UNITA placed all of its efforts on the development of its political party. Despite the ceasefire, deep political conflict between UNITA and the MPLA remains.

The U.S. government "explicitly encouraged" the governments of Israel, Morocco, Saudi Arabia, South Africa, and Zaire to aid UNITA. In 1983 the U.S. and South African governments agreed to ship weapons from the Honduras, Belgium and Switzerland to South Africa and then to UNITA in Angola. The U.S. also traded weapons with South Africa for intelligence on the civil war.[10]

Savimbi was influenced heavily by military and political guidance from influential American conservatives, including The Heritage Foundation's Michael Johns, conservative activist Grover Norquist and other U.S. conservative leaders, all of whom helped elevate Savimbi's stature in Washington and facilitated the transfer of American weapons to his war.

Johns and other American conservatives met regularly with Savimbi in remote Jamba, culminating in the "Democratic International" in 1985. Savimbi later drew the praise of U.S. President Ronald Reagan, who hailed him as a freedom fighter and spoke of Savimbi winning a victory that "electrifies the world."[11]