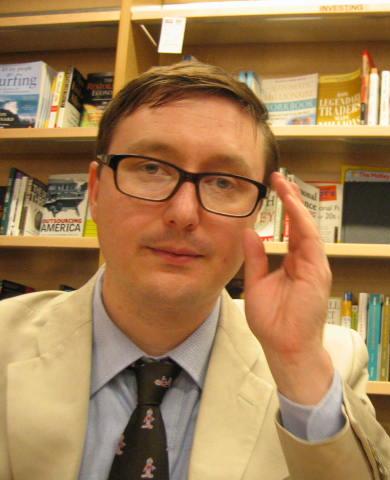 John Kellogg Hodgman [Hodgman, John. “ [http://www.openletters.net/000904/hodgman000905.html Wish Lists] .” "Open Letters". , .] (born , ) is an American author and humorist. In addition to his published written work, such as "", he is best known for his personification of a PC in Apple's "" and his correspondent work on ’s "The Daily Show with Jon Stewart".

His written work has been published in "" to which he contributed the debut story, "The Paris Review", "McSweeney's Quarterly Concern", "Wired" and "", for which he is editor of the humor section. He is also a contributor to ’s "", and the ’s "Wiretap". His first book and accompanying audio narration, "", a satirical which contains almost no factual information, was published in 2005. His second book, "", on shelves October 21, 2008, will pick up exactly where the first book leaves off.

In addition, Hodgman is the founder of, and for, in . The lectures have been on hiatus "for the foreseeable future" as of August 2007 (currently noted as "until at least Jan 1, 2008").

Hodgman was born and raised in and attended and . [Chase, Katie Johnston. [http://www.boston.com/ae/tv/articles/2006/09/24/true_to_his_nerd/ "True to his nerd: John Hodgman finds a niche as 'Daily Show' resident expert, mendacious author, and dorky PC"] , "", , . Accessed , . "He was focused, and a touch eccentric, from the start. ``He was a legend at his own elementary school," the Heath School... and in eighth grade he was voted most likely to become the editor of The New Yorker.... "] Hodgman studied clarinet performance at the in . He graduated from in 1994. [ [http://www.yaledailynews.com/articles/view/19749 Yale Daily News - Yale alumni move up in the world of comedy ] ] Before gaining fame as a writer, Hodgman worked as a literary agent at Writers House in , where he represented , , , and actor , among others. Hodgman has used his experience as an agent in his column [http://www.mcsweeneys.net/links/aafpla/ “Ask a Former Professional Literary Agent”] at "McSweeney's Internet Tendency". Hodgman lives in New York City with his family.

Hodgman appeared on "" on , to promote his book, "". Host described the book as “very funny” and said that the section on names in particular was written with “a certain kind of genius.” Hodgman has returned to the "Daily Show" several times for "resident expert" interview segments, and he is listed on the show's web site as a contributor. [ [http://www.thedailyshow.com/castBio.jhtml?castId=58470 Bio of Hodgman] on "The Daily Show"’s web site, accessed Jan. 30, 2008] Unlike other correspondents, who are frequently re-branded with titles using the “Senior [descriptive word or topic] Correspondent” format, Hodgman retains the simple title "Resident Expert."

"Attack of the Show"

In February of 2006, Hodgman appeared on "", a show which runs daily on G4, to share some insight with the host and promote his book "". In this appearance Hodgman recounted the sad tale of the lobster (which he said were actually a small, furry, extinct species, killed and replaced by the creatures we think of as lobsters today) and brought along , a frequent Hodgman collaborator and musical director of the Little Gray Book lectures. Coulton performed a song called "Furry Old Lobster". [http://www.jonathancoulton.com/music/thingaweek/FurryOldLobster.mp3]

"Get a Mac" ad campaign

Hodgman appears in the for , which started in May 2006. In the ads he plays an PC alongside his Mac counterpart, played by actor . While he plays the role of a PC in the campaign, Hodgman is actually a Mac user: "I bought the very first Mac, or convinced my father to buy it, in 1984."

In 2005, Hodgman played a character named "The Deranged Millionaire" in ' , narrating in between songs with dialog he co-wrote with the band. He also narrated a number of "Venue Songs"-themed setlists during the band's live shows in 2005, and has introduced the band while in the role of The Deranged Millionaire as recently as , .

"Flight of the Conchords"

In 2007, Hodgman appeared in the "Bowie" episode of the television series "Flight of the Conchords". He played the manager of a musical greeting card company who was considering using one of the band's songs for a greeting card.

Hodgman and close friend were interviewed for an episode of the program in 2006. [ [http://www.maximumfun.org/blog/2006/10/podcast-best-friends-with-john-hodgman.html The Sound of Young America: Podcast: Best Friends with John Hodgman and Jonathan Coulton ] ] Hodgman also appeared on the podcast Jordan, Jesse GO! playing "Judge Hodgman" presiding over a mock trial.

Hodgman also appeared with Jonathan Goldstein on a segment of the "WireTap" episode titled "The Gentleman's Guide to Grooming", reading from his book "".

* [http://www.zefrank.com/theshow/archives/2007/02/022207.html Zefrank's The Show] , at the tail end of the episode discussing the brisk Brooklyn weather.
* On the podcast [http://www.youlooknicetoday.com You Look Nice Today] , hosted by and others, Hodgman provides the non sequitur act breaks that play between talk segments, as well as opening and closing the show.
* In the online role playing game , much of the material for the multiplayer dungeon "Hobopolis" as well as the final boss character for the area is based on Hodgman and his fictionalized discussion of hobos. Many parts of the randomly generated hobo names are also taken from the section on hobo names in "". The game's administrators asked for and were granted permission by Hodgman for the use of parts of his hobo names, as well as for permission to use him as the final boss of Hobopolis. Hodgman was reportedly "flattered". [The KoL Wiki “ [http://kol.coldfront.net/thekolwiki/index.php/Hodgman%2C_The_Hoboverlord Hodgeman, The Hoboverlord] .” ]