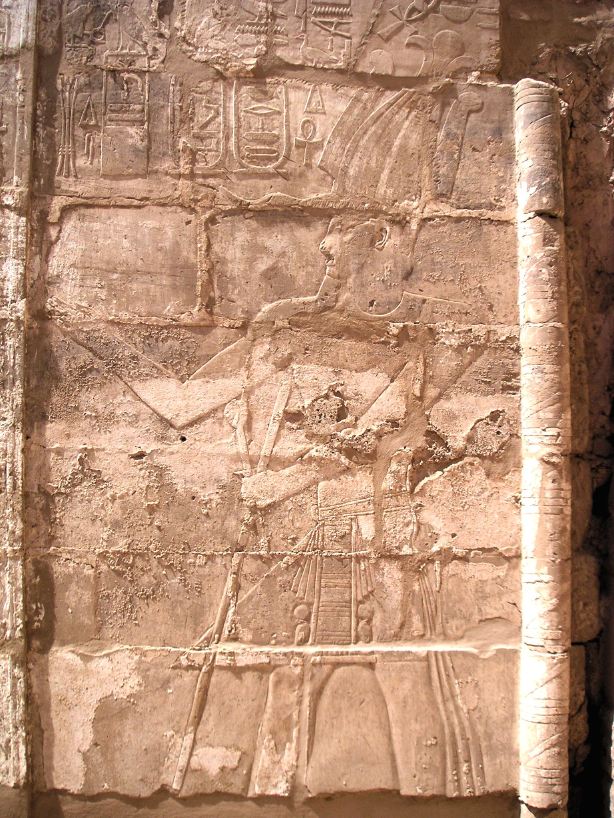 Usimare Setepenamun Takelot III Si-Ese was 's eldest son and successor. Takelot III ruled the first five years of his reign in a with his father and served previously as the High Priest of Amun at Thebes. He was previously thought to have ruled Egypt for only 7 years until his thirteenth year was found on a stela. Takelot III has now been identified as the anonymous Year 19 Egyptian Pharaoh at rather than Iuput by the French Egyptologist Frederic Payraudeau. [Frédéric Payraudeau, "Le règne de Takélot III et les débuts de la domination Koushite," GM 198(2004) pp.79-90] His argument is based on palaeographical, chronological and geneaological evidence from Papyrus Berlin 3048, which is dated to Year 14 of king Takelot Si-Ese Meryamun. (ie. either Takelot II or III.) Takelot III served the first 5 Years of his reign as the junior coregent to his father according to the evidence from No.14, which equates Year 28 of Osorkon III to Year 5 of Takelot III. He succeeded his father as king in the following Year. Takelot is attested by several documents: a donation from Gurob which calls him "The First Prophet of Amun-Re, General and Commander Takelot," a stone block from Herakleopolis which calls him 'the Chief of Per-Sekhemkheperre' and king's son by Tentsai, Quay Text No.13 which equates Year 5 of Takelot III to Year 28 of Osorkon III and Quay Text No.4 which records his Year 6. [Payraudeau, op. cit., pp.79-80]

A Graffito on the roof of the Temple of Khonsu which records his Year 7, was long believed to be his Highest Year date. However, in February 2005, a hieratic stela from Year 13 of his reign was discovered by a University of Columbia archaeological expedition in the ruins of a Temple at the Dakhla Oasis. [Olaf Kaper and Robert Demarée, "A Donation Stela in the Name of Takeloth III from Amheida, Dakhleh Oasis," Jaarbericht Ex Oriente Lux(JEOL) 39 [2006] , pp.19-37] Their subsequent analysis of this dated document conclusively established this king's identity as Takelot III. [Kaper & Demarée, op. cit., pp.29, 31-33] This document--which measures "between 42-48 cm wide; between 47-51 cm high; [and] between 10-16 cm thick"--has now been published in JEOL 39 (2006) by Dr. Olaf Kaper and Robert Demarée. [Kaper & Demarée, op. cit., p.22] Part of the abstract for their article is given below:

: "...The stela belongs to a group of finds documenting the temple of the God ... [in the western part of the Dakhla Oasis] ...during the Third Intermediate Period. One block of temple decoration was found in the name of king Petubastis (I), and the stela under discussion was set up in the temple to which this block belonged. The stela's principal text has five lines, in which the date of the stela is given as Year 13 of Takeloth III (c. 740 BCE), as well as the name of the god Thoth of SA-wHAt, the local deity. The stela records a land donation to the temple on the part of the local governor, chief of a tribe, and it concludes with a list of eleven priests who are beneficiaries of this donation....Another donation stela erected by the same governor is known from the temple of Seth in Mut (Dakhleh)." [Kaper & Demarée, JEOL 39 abstract]

The governor mentioned here is "Nes-Djehuti" or "Esdhuti" who appears as the Chief of the Shamin Libyans in both the aforementioned Year 13 stela of Takelot III and also in the Smaller Dakhla Stela--which dates to Year 24 of the Nubian king . [Kaper & Demaree, op. cit., p.31-32] [K.A. Kitchen, The Third Intermediate Period in Egypt (c.1100--650 BC), 3rd ed., Warminster: 1996. p.371] The latter stela dates to Year 24 of . [Jac Janssen, The Smaller Dakhla Stele JEA 54 (1968) pp.166-71] This means that Takelot III and Piye were near contemporaries during their respective reigns. It also suggests that an important graffito at Wadi Gasus--which connects Year 19 of a local Theban ruler to Year 12 of a Nubian king--equates Year 19 of Takelot III (rather than Rudamun) to Year 12 of Piye. This graffito would have been carved prior to Piye's conquest of Egypt in his 20th Year--by which time both Takelot III and Rudamun had already died.

Frederic Payraudeau notes that Takelot III likely ruled Egypt for a minimum of 14 Years and was presumably the unknown Year 19 Egyptian monarch recorded at Wadi Gasus. He bases his interpretation on the evidence of Papyrus Berlin 3048, the only surviving administrative document on papyri for the entire Libyan period. This document, which is explicitly dated to Year 14 of a Takelot Si-Ese Meryamun (ie: either Takelot II or III), records a Marriage Contract which was witnessed by Vizier Hor, and 2 Royal Treasurers: Bakenamun and Djedmontuiufankh. The papyrus has usually been attributed to Takelot II since this ruler's Highest Date is his Year 25 whereas Takelot III's highest unequivocal date was only thought to be his Year 7. The author, however, observes 4 pieces of evidence which, taken together, supports the attribution of this papyrus to Takelot III instead. Firstly, the document was composed entirely in Abnormal Hieratic which is a relatively late form of Third Intermediate Period era writing that appears only in n and early Saite era documents. (Payraudeau: 85) This fact alone implies that P. Berlin 3048 was created close in time to the start of the Nubian 25th Dynasty since the earliest securely dated papyrus documents written in Abnormal Hieratic are a pair of Year 21 and 22 papyri from 's reign. (Payraudeau: 85) The abnormal hieratic script would not have been in use as early as Year 14 of Takelot II, a king who ruled Thebes about 80 years before the Nubian conquest of Egypt under Piye. Frederic, hence, argues that this papyrus is the earliest known example of this new form of Writing in . This strongly suggests that the king Takelot mentioned here was rather Takelot III whose son-in-law, Peftjaubast of Herakleopolis, is attested in Piye's Year 20 Victory stela. Gerard Broekman, in a JEA 88(2002) paper on the Karnak Quay Texts, observes that the Ancient Egyptian form of Writing or palaeography began to change around the end of Shoshenq III's reign as the Archaism era began. [Gerard Broekman, "The Nile Level Records of the Twenty-Second and Twenty-Third Dynasties in Karnak: A Reconsideration of their Chronological Order," JEA 88(2002), pp.165-178] This would be the time when one would expect the start of the use of Abnormal Hieratic in official state documents.

Secondly, Frederic stresses that P. Berlin 3048 specifically mentions two Royal treasurers. The fact that 2 treasurers served Pharaoh at the same time is inconsistent with the known facts for the period from the reign of Osorkon II until the early years of Osorkon III at Thebes when only a single person from one influential family served in this office. They were the descendants of Djedkhonsuiufankh A, who was the Fourth Prophet of Amun under : Nakhtefmut A, Harsiese C and Djedkhonsuiufankh C. Djedkhonsuiufankh A's son, Nakhtefmut A, first assumed the office of Royal Treasurer under Osorkon II; then Nakhtefmut A's son, Harsiese C, in turn succeeded him (likely under Takelot II). Finally, Harsiese C's son, Djedkhonsuiufankh C, occupied this office from the end of Takelot II's reign until the early years of Osorkon III's reign under whom he is attested. Since three direct descendants of one powerful family held the office of Royal Treasurer in the period around Takelot II's reign, it is unlikely that Djedmontuiufankh could have intervened in office as early as Year 14 of since he was not even connected to this family. Hence, the only other viable candidate for Djedmontuiufankh's master is Takelot III for whom no Royal Treasurer is known with certainty. Thirdly, the Vizier Hor who is mentioned in Papyrus Berlin 3048 is likely the same person who is named as the father of Vizier Nebneterou in several Nubian and Saite era geneaological documents. [Herman De Meulenaere, Le Vizir Nebneterou, BIFAO 86(1986), pp.143-149] This also makes it far more plausible that P. Berlin 3048 belongs to Takelot III since Hor would have served as Vizier only a few years prior to the start of the Nubian Dynasty in Egypt under and would explain his son's later attestations in Nubian and Saite documents. In contrast, Takelot II died long before Piye conquered Egypt in his 20th Year.

Finally, the author notes that the Royal Treasurer Djedmontuiufankh, son of Aafenmut II, lists his family geneaology on the opposite side of this papyrus. (Payraudeau: 84-85) This specific list of his family tree is given: Harsiese-->Bakenkhonsu-->Harsiese-->Aafenmut I-->Merkhonsu-->Harsiese--> (name lost) -->Harsiese-->Aafenmut II-->Djedmontuiufankh-->Harsiese. An Aafenmut, a scribe of the Chief Treasurer, was buried under Osorkon I (bracellets on his Mummy bore this king's prenomen). Frederic notes that an identification of this person with one of the listed predecessors of Djedmontuiufankh is certain here since this person functioned as a 'scribe of the Treasury'--a state office with which Djedmontuiufankh's family was intimately linked with. However, this Aafenmut was probably Aafenmut I rather than Aafenmut II, Djedmontuiufankh's father, since this person's son could not lived beyond three family generations (under Takelot I, Osorkon II and the High Priest Nimlot C) from the reign of Osorkon I into Year 14 of Takelot II, as the author notes. Frederic also highlights the existence of the funerary stela of a certain Harsiese, son of Merkhonsu, which was found at the and has been stylistically dated to the 9th Century BC in the period around Takelot I or Osorkon II's reign to support his hypothesis that both Aafenmut I and Merkhonsu were direct ancestors of Djedmontuiufankh.

As an aside, the author notes that No.45--which, according to Gerardus Broekman in JEA 88(2002), records either Year 17, 18 or 25 of an anonymous Theban king who ruled after Shoshenq III--may perhaps be ascribed to Takelot III based on the evidence of Papyrus Berlin 3048. [Broekman, op. cit., pp.170-178] Since Year 13 of Takelot III is now attested, it appears probable that the Year 14 date in this document also belongs to his reign, rather than Takelot II.

Takelot III was the husband of Irtiubast who is named "as a King's Daughter on the coffin of their son, Osorkon G." [Aidan Dodson & Dyan Hilton, The Complete Royal Families of Ancient Egypt, Thames & Hudson, 2004. p.227] He was ultimately succeeded in power by his younger brother , who was another son of Osorkon III rather than by any of his 3 known sons: the Prince/High Priest Osorkon F, a Prince Ihtesamun who is known from the stela of his grandson Ankhfenmut in Croydon Central Library and, finally, the Second Prophet of Amun, Djedptahefankh D who is attested in statue Tübingen 1734 and in stela CG 41006 of his great-granddaughter Nakhtbasteru. [Aston & Taylor, op. cit., pp.132-136] This development suggests that Takelot III must have reached an advanced age to have outlived all of his sons since it was unusual for a brother of a king to assume the throne if the king still had a son who was living. [Payraudeau, op. cit., pp.87-88] Traditional Egyptian custom required that the son of a king directly succeed his father. This fact also supports the view that Takelot III enjoyed a reign approaching 2 decades and was probably the Year 19 king recorded at Wadi Gasus.