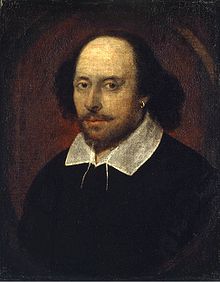 William Shakespeare in a sheer linen collar of the early 17th century, a direct ancestor of the modern shirt collar.

In clothing, a collar is the part of a shirt, dress, coat or blouse that fastens around or frames the neck. Among clothing construction professionals, a collar is differentiated from other necklines such as revers and lapels, by being made from a separate piece of fabric, rather than a folded or cut part of the same piece of fabric used for the main body of the garment.

A collar may also be a separate or detachable accessory worn around the neck.

The Oxford English Dictionary traces collar in its modern meaning to c. 1300. Today's shirt collars descend from the ruffle created by the drawstring at the neck of the medieval chemise, through the Elizabethan ruff and its successors, the whisk collar and falling band. Separate collars exist alongside attached collars since the mid-16th century, usually to allow starching and other fine finishing.

During the Edwardian period and sporadically thereafter, ornamental collars were worn as a form of jewelry.

Collars can be categorized as:

Collars may also be stiffened, traditionally with starch; modern wash-and-wear shirt collars may be stiffened with interfacing or may include metal, brass or plastic collar stays. Shirt collars which are not starched are described as soft collars. The shape of collars is also controlled by the shape of the neckline to which they are attached. Most collars are fitted to a jewel neck, a neckline sitting at the base of the neck all around; if the garment opens down the front, the top edges may be folded back to form lapels and a V-shaped opening, and the cut of the collar will be adjusted accordingly.

Names for specific styles of collars vary with the vagaries of fashion. In the 1930s and 1940s, especially, historical styles were adapted by fashion designers; thus the Victorian bertha collar, a cape-like collar fitted to a low scooping neckline, was adapted in the 1940s but generally attached to a V-neckline.

Some specific styles of collars include:

Conventions on fastening the buttons on a collar differ globally. In the United States and the United Kingdom, the top button is virtually always left unbuttoned, unless one is wearing a necktie, but unbuttoning two or more buttons is seen as overly casual. By contrast, in Slavic countries, including at least Poland, and Ukraine, the top button is buttoned even in the absence of a tie.

From the contrast between the starched white shirt collars worn by businessmen in the early 20th century and the blue chambray workshirts worn by laborers comes the use of collar colors in job designation, the "workforce colorwheel". Examples are blue-collar, pink-collar and white-collar.