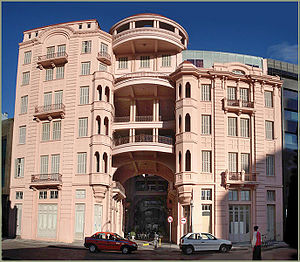 Mario de Miranda Quintana (Alegrete, July 30, 1906 — Porto Alegre, May 5, 1994), was a Brazilian writer and translator. He became known as the poet of "simple things", and his style is marked by irony, profundity and technical perfection. The main themes of his poetry include death, the lost childhood and time. Quintana also worked as a journalist and translated into Portuguese innumerable books, such as Mrs. Dalloway by Virginia Woolf. Mario Quintana was the son of Celso de Oliveira Quintana de Miranda and Virginia, made the first letters in his hometown, moving to Porto Alegre in 1919, where he studied at the Military College, and published his first literary productions there. Worked for Editora Globo, when it was still an institution eminently the state, and then father in the pharmacy.

Considered the "poet of simple things" with a style marked by irony, by the depth and technical perfection, he worked as a journalist most of his life. Translated over one hundred and thirty works of world literature, including In Search of Lost Time by Marcel Proust, Virginia Woolf's Mrs. Dalloway, and words and Blood, by Giovanni Papini.

In 1953, Quintana has worked in the newspaper Correio do Povo, as columnist page culture, coming out on Saturdays, and in 1977 left the newspaper.

In 1940, he released his first book of poetry, The Windmills Street, beginning his career as a poet, writer and children's author. In 1966, published his Poetics Anthology, with sixty poems, organized by Rubem Braga and Paulo Mendes Campos, and released to commemorate his sixty years of age, and for this reason the poet hailed the Brazilian Academy of Letters by Meyer and Manuel Augusto flag, reciting the poem Quintana, of his own, in honor of fellow gaucho. In the same year won the Fernando Chinaglia of the Brazilian Union of Writers of best book of the year. In 1976, after completing seventy years, was awarded the Medal of Grazing Negrinho the state government of Rio Grande do Sul in 1980 was awarded the Machado de Assis, the GLA, the body of work.

Mario Quintana never married nor had children. Lonely, he lived most of his life in hotels: 1968 to 1980, resided at the Hotel Majestic, in the historic center of Porto Alegre, where it was dumped when the newspaper Correio do Povo temporarily closed its activities, financial problems and Quintana without pay , stopped paying the rent of the room. At the time, the sports commentator and former player of the Brazilian Paulo Roberto Falcao gave him a room at the Hotel Royal, of his property. The friend who found a small room, Quintana said, "I live in myself. Never mind that the room is small. It's good, so I have fewer places to lose my stuff."

The poet has tried three times to place a Brazilian Academy of Letters, but none of the occasions was elected and the reasons for the electoral institution does not allow him to reach the twenty votes needed to qualify for a chair. After being asked to apply a fourth time, and even with the promise of unanimity around his name, the poet refused.