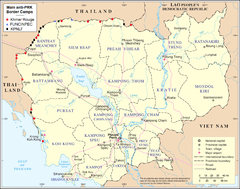 The signing ceremony of the coalition took place in Kuala Lumpur on June 22, 1982.[1] The President of the coalition was Prince Norodom Sihanouk, the Prime Minister was the KPNLF leader Son Sann and the foreign secretary was PDK leader Khieu Samphan.

The CGDK was allowed to retain the seat of Democratic Kampuchea to the UN on the premise that it was a legitimate Cambodian government in contrast to the Vietnamese installed and controlled People's Republic of Kampuchea regime (the Western states had previously opposed proposals by the Eastern bloc countries to replace the Khmer Rouge-held seat of Cambodia by the representation of the Vietnamese-installed regime). The UN General Assembly voted on the proposed ouster of Democratic Kampuchea: 91 rejected the proposal, there were 29 countries in favor and 26 abstentions. In contrast, in 1981, the results had been 77-37-31.[2] The CGDK was also recognized by North Korea, whose leader, Kim Il-Sung, had offered Sihanouk sanctuary after he was deposed by Lon Nol in 1970. During a meeting between Kim Il-sung and Sihanouk on April 10, 1986, in Pyongyang, the Kim Il-Sung reassured Sihanouk that North Korea would continue to regard him as the legitimate head of state of Cambodia.[3]

In the late 1980s and early 1990s, prior to the formation of the CGDK political coalition, the Sonn Sann and Sihanouk opposition forces, then known as FUNCINPEC, drew some military and financial support from the United States, which sought to assist these two movements as part of the Reagan Doctrine effort to counter Soviet and Vietnamese involvement in Cambodia. In 1984 and 1985, however, the Vietnamese army's offensives severely weakened the CGDK troops' positions, in effect eliminating the two non-communist factions as military players, leaving the Khmer Rouge as the sole military force of importance of the CGDK.[4] One of the Reagan Doctrine's principal architects, the Heritage Foundation's Michael Johns, visited with Sonn Sann and Sihanouk forces in Cambodia in 1987, and returned to Washington urging expanded U.S. support for the KPNLF and the Sihanouk resistance forces as a third alternative to both the Vietnamese-installed and supported Cambodian government and the Khmer Rouge, which also was resisting the government.[5]

Although the PDK was for the most part isolated from diplomacy, their National Army of Democratic Kampuchea were the largest and most effective armed forces of the CGDK. Thai Generals allegedly armed the Khmer Rouge independently in order to boost their capability against the Vietnamese. This support was generally facilitated by the U.S. and other western nations,[6][7][8] which sought to weaken Vietnam's political and military influence within the coalition in an attempt to maintain instability in the region. In 1987, Prince Sihanouk proceeded to take 'a leave of absence' from his position as the president of the CGDK, a move that raised the hopes of Hanoi and Moscow that he would depart the coalition.

In 1990 in the run up to the UN sponsored Paris Peace Agreement of 1991, the CGDK renamed itself the National Government of Cambodia. It was dissolved in 1993, a year which saw the United Nations Transitional Authority in Cambodia turn power over to the restored Kingdom of Cambodia. In July 1994 the Khmer Rouge would form an internationally unrecognized rival government known as the Provisional Government of National Union and National Salvation of Cambodia.