First created as a summer training alternative, roller skiing has now grown into a competitive sport in its own right. Annual championships are held in various locations around the world. Most, if not all, national cross-country ski teams around the world roller ski during the off-season to simulate the ski motion.

The skiing technique applied on roller skis is very similar to the technique used on snow conditions. The back kick in classic technique is slightly different because roller skis do not slide backwards.

The first rollerskis were built in the mid ‘30s in Italy and North Europe.

In the early 1950s, when cross-country skiing started to evolve to a serious competition sport, the necessity for good summer training grew. All around the world from 1950s to 1970s people experimented with skis on wheels.

In the 1970s something of a standard emerged and the first races took place. At this time all rollerskis had one wheel in front and two wheels at the back. The metal frame was between 70 and 100 centimetres (2'4" and 3'4") long.

Athletes felt they could start to engage themselves in competitions. In 1976, Giustino Del Vecchio, an air pilot, established a record in Monza by doing 240.5 km in 24 hours thanks to the skirolls he had designed, using material and technologies from the aircraft industry; narrow solid wheels with hard tread, reverse lock-up ball bearings to enable push forward.[1]

In the beginning the skis were developed with one wheel in front and two wheels behind.The introduction of skating (free technique) in cross-country skiing implied some changes in the use of materials and training methods, which consequently produced an impact on rollerskis (maybe changes were started by rollerskis, with which skating is much easier). From 3 to 2 wheels, much lighter and easier to use, rollerskis could be used both for the classic style and skating. Paolo Miorin, with his famous Skirollo, can be considered the inventor of the innovative 2-wheels rollerskis.

The World Record for the greatest number of roller skiers in one place was established in the Gatineau Park, Chelsea Quebec, Canada 2 October 2010.

The races became international and the need for serious supervising grew. Around 1985 the European Rollerski Federation was established and the first European Championships were organized in the Netherlands in 1988.

The races are very well differentiated: from only uphill, to flat to undulating tracks. From relays, sprints (typical 200 metres) and team races to individual races and pursuit races. On flat tracks the speed can be as fast as 50 kilometres per hour (30 miles per hour). Average speed on flat tracks in World Cup races can easily be 30 kilometres per hour (almost 20 miles per hour). As in regular cross-country skiing, the rollers compete in classic and free style. Helmets and protective eyeglasses in competitions are mandatory.

The Italian, Russian, Norwegian, Swedish and German rollers, have been very strong in competitions compared to other Nations since the beginning in 1993. Note that World Roller Skiing championships are not an officially sanctioned races by FIS or recognized sports governing bodies.

Mateja Bogatec from Italy has been one of the most successful female rollers since the beginning of the FIS World Cup in 2000.

For classic style roller skiing the skis usually have wider wheels, and a rachet mechanism on one of the wheels, normally the front. This front wheel only rolls in the forward direction and provides resistance on the "kick"—comparable to grip wax on snow.

For skate skiing, the roller skis usually have narrower wheels (similar to those used on inline skates), with both wheels rolling freely.

There are also types of roller skis that have both thin and thick wheels, with a thin one on the tip, a slightly thicker wheel in front of the binding, and two thick wheels at the very back.

Roller skis with pneumatic tires are also available for rough pavement and off-road use.

Normal cross-country ski bindings and ski boots are used with most roller skis. Cross-country ski poles are also used, with the "basket" replaced by a tungsten carbide spike.

Extra protective clothing is recommended (gloves, helmet, knee and elbow pads). Many ski training programs require the use of helmets while roller skiing. 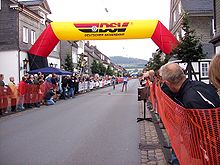 Most roller skis don't have bona fide brakes, except for a relatively new calf-activated brake pioneered by Len Johnson of V2 Jenex. Speed reducers, available on some models, work by providing different levels of friction against the wheels. There are also techniques for slowing down without the use of speed reducers. The most common of which is a motion similar to a snowplow on snow skis where pressure is applied to the outside edge of the roller ski and the skis pointed in an inward fashion.

Roller skiing is most popular in Europe (France, Italy, Norway, Finland, Estonia, Sweden, Russia) where there are many serious races and even a World Cup Circuit. In North America, rollerskiing is popular in areas with many Nordic skiers such as Canmore, Ottawa, Alberta, Alaska, New York, Vermont, New Hampshire, Maine, Minnesota, Wisconsin.

It is recommended to wear reflective clothing and flashing red lights to increase visibility in dark areas. Safety equipment such as a helmet is recommended.

Nordic blading is a sport which uses ski poles with special tips and inline skates or roller skis to train the total body for skiing. The sport has been practiced for over 80 years by elite cross-country skiers in the off season and is now being redescovered by the masses through blading. It is much like Nordic Ski walking, the only difference being that skates/roller skis are used. The benefits of Nordic blading are similar to that of cross-country skiing if performed correctly. Nordic Blading has also been proven more risky than inline skating as the poles constitute extra coordination challenges. By using the poles, the user can also expect to develop upper and core body strength.