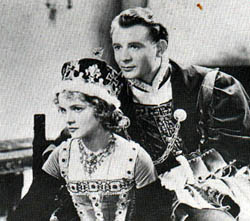 "Tudor Rose" (US title "Nine Days a Queen") is a 1936 British starring and and directed by Robert Stevenson.

The film is a dramatization of 's brief reign as Queen of . It opens with King Henry VIII on his deathbed stating the order of succession, and ends with Jane's . It took some liberties with the history of the period, including a fictional playing a similar role to in real life. It was the second of three film versions of her life.

What appears to be a truncated version of this film, lasting around 30 minutes, is currently available on , in three parts ( [http://uk.youtube.com/watch?v=R711hKXCZ_M see first part] ).