A birthday is a day or anniversary where a person celebrates his or her date of birth. Birthdays are celebrated in numerous cultures, often with a gift, party or rite of passage. Although the major religions celebrate the birth of their founders (e.g., Buddha's Birthday), Christmas – which is celebrated widely by Christians and non-Christians alike – is the most prominent example. In contrast, certain religious groups, as is the case with Jehovah's Witnesses, express opposition to the very idea of celebrating birthdays.[1]

In most legal systems, one becomes a legal adult on a particular birthday (often the 14th through 21st[2]), and reaching age-specific milestones confers particular rights and responsibilities. At certain ages, one may become subject to military conscription or become eligible to enlist in the military, to marry without parental consent, to vote, to run for elected office, to legally purchase (or consume) alcohol and tobacco products, to purchase lottery tickets, or to obtain a driver's license.

Many cultures have one or more coming of age birthdays: 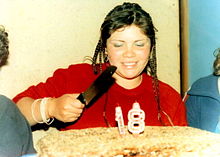 Celebration of a traditional Chilean birthday. 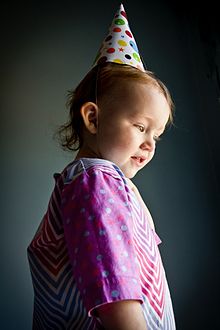 The birthdays of historically significant people, like national heroes or founders, are often commemorated by an official holiday. Catholic saints are remembered by a liturgical feast (sometimes on a presumed birthday). By analogy, the Latin term Dies natalis is applied to the anniversary of an institution (such as a university).

A person's Golden or Grand Birthday, also referred to as their "Lucky Birthday", "Champagne Birthday" or "Star Birthday", occurs when they turn the age of their birth day (e.g., when someone born on the 25th of the month turns 25).[7]

In some historically Roman Catholic Eastern Orthodox countries such as Italy, Spain, France, Poland, Russia, Romania, Bulgaria, Serbia, Slovakia, Czech Republic, Hungary, Greece, Lithuania, Latvia and throughout South America, it is common to have a 'name day'/'Saint's day'. It is celebrated in much the same way as a birthday, but is held on the official day of a saint with the same Christian name as the birthday person; the difference being that one may look up a person's name day in a calendar, or easily remember common name days (for example, John or Mary); however in pious traditions, the two were often made to concur by giving a newborn the name of a saint celebrated on its birthday, or even the name of a feast, for example, Noel or Pascal (French for Christmas and "of Easter"); for one, Togliatti got Palmiro as first name because he was born on Palm Sunday. 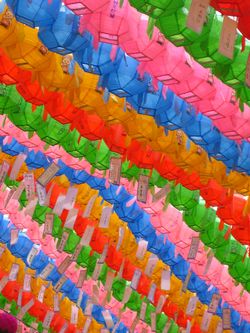 Some notables, particularly monarchs, have an official birthday on a fixed day of the year, which may not necessarily match their actual birthday, but on which celebrations are held. Examples are:

More recently October 5th has taken over as the most popular birthday.[10]

According to a study by Yale School of Public Health, positive and negative associations with culturally significant dates can influence birthrates. The study shows a 5.3 percent decrease in spontaneous births and a 16.9 percent decrease in cesarean births on Halloween, compared to other births occurring within one week before and one week after the October holiday. Whereas, on Valentine’s Day there is a 3.6 percent increase in spontaneous births and a 12.1 percent increase in cesarean births. [11]

A person's birthday is usually recorded according to the time zone of the place of birth. Thus people born in Samoa at 11:30 pm will record their birthdate as one day before Coordinated Universal Time (UTC) and those born in the Line Islands will record their birthdate one day after UTC. They will apparently be born two days apart, while some of the apparently older ones may be younger in hours. Those who live in different time zones from their birth often exclusively celebrate their birthdays at the local time zone. In addition, the intervention of Daylight Saving Time can result in a case where a baby born second is recorded as having been born up to an hour before their predecessor.[12]

Birthdays in cultures and religions

The Romans enthusiastically celebrated birthdays with hedonistic parties and generous presents.[13] In revulsion that the early Christians rejected the practice as inherently pagan.

In Judaism, the perspective on birthday celebrations is disputed by various rabbis.[14] In the Hebrew Bible, the one single mention of a celebration being held in commemoration of someone's day of birth is for the Egyptian Pharaoh which is recorded in Genesis 40:20.[15]

The bar mitzvah of 13-year-old Jewish boys, or bat mitzvah for 12-year-old Jewish girls, is perhaps the only Jewish celebration undertaken in what is often perceived to be in coalition with a birthday. However, the essence of a bar/bat mitzvah celebration is entirely religious in origin (i.e. the attainment of religious maturity according to Jewish law) and not secular, despite modern celebrations where the secular "birthday" element often overshadows the essence of it as a religious rite. With or without the "birthday" celebration, the child nevertheless becomes a bar or bat mitzvah, and the celebration can be on that day or any date after it.

The early Christians did not celebrate Christ's birth because they considered the celebration of anyone's birth to be a pagan custom. For example Origen in his commentary "On Levites" writes that Christians should not only not celebrate their birthdays, but should look on them with disgust.[16]

Orthodox Christianity still prefers the celebration of name days only.

Ordinary folk celebrated their saint's day (the saint they were named after), but nobility celebrated birthdays. The "Squire's Tale," one of Chaucer's Canterbury Tales, opens as King Cambuskan proclaims a feast to celebrate his birthday.[17]

Jehovah's Witnesses and some Sacred Name groups refrain from celebrating birthdays on the basis that they are portrayed in a negative light in the Bible and have historical connections with magic, superstitions, and Paganism.[18][19][20][21][22]

Some Muslims (and Arab Christians) migrating to the United States adopt the custom of celebrating birthdays, especially for children, but others resist.[24]

Hindus celebrate the birth anniversary day every year when the day that corresponds to lunar month or solar month (Sun Signs Nirayana System – Sourava Mana Masa) of birth and has the same asterism (Star / Nakshatra) as that of the date of birth. That age is reckoned whenever Janma Nakshatra of the same month passes.

Many monasteries celebrate the Buddha's birthday, usually in a highly formal, ritualized manner. They treat Buddha's statue as if alive, bathing and feeding it.[25]

The importance of birthdays in LaVeyan Satanism[26] has been cited by several groups that do not celebrate birthdays, usually as an addition to their main arguments.[27][28][29][30][31][32]

A number of possible superstitious origins for customs associated with birthday celebrations have been suggested. One source states that the tradition of birthday parties started in Europe. It was feared that evil spirits were particularly attracted to people on their birthdays and to protect them, they would be visited by friends and family, who would bring good thoughts and wishes.[33]