You Are All Diseased

You Are All Diseased

Infobox Album |
Name = You Are All Diseased
Type =
Artist = 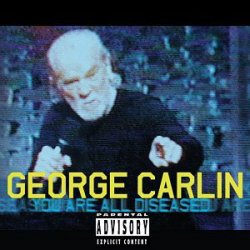 "You Are All Diseased" is the title for the 1999 HBO live broadcast stand-up special with comedian , recorded on February 6, 1999 at the in New York City and released on CD in May of that year.

After the closing credits, the words "Brenda, we miss you" appear under the photograph of Brenda Carlin, his wife of 36 years before her death from liver cancer.

During the "Kids and Parents" skit, Carlin says "This is Mr. Conductor talkin', I know what I'm talkin' about." On Carlin played the character as well as providing narration for , a series within the show.