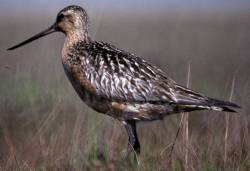 The godwits are a group of large, long-billed, long-legged and strongly migratory wading s of the "Limosa". They form large flocks on coasts and estuaries in winter.

Although not common tablefare today, they were once a popular British dish. Sir writing in the seventeenth century noted that godwits "were accounted the daintiest dish in England."

Godwits are shore birds (family Scolopacidae), large sandpipers with long legs and bills. Their long, subtly upcurved bills allow them to probe deeply in the sand for aquatic worms and mollusks. Godwits frequent tidal shorelines, breeding in northern climates in summer and migrating south in winter. In their winter range, they flock together where food is plentiful. The combination of long legs and long almost straight bill distinguishes the godwits from both the curlews and the dowitchers

In addition, there are one or 2 species of prehistoric godwits. "Limosa vanrossemi" is known from the (Late , approx. 6 mya) of , . "Limosa gypsorum" of the Late (, some 35 mya) of may have actually been a or some bird ancestral to both curlews and godwits (and possibly other ), or even a rail, being placed in the genus "" by some (Olson, 1985). Certainly, curlews and godwits are rather ancient and in some respects primitive lineages of scolopacids (Thomas "et al.", 2004), further complicating the assignment of such possibly basal forms.

A female bar-tailed godwit holds the record for the longest non-stop flight for a land bird.