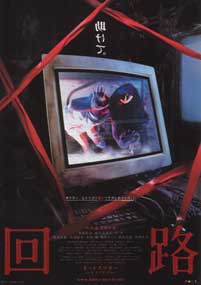 The plot centers on ghosts invading the world of the living via the Internet. The film is a philosophical exploration into the alienation and of modern existence thanks to technology and more specifically, the . Communication breakdown and isolation are the main themes of the film.

The film - which is set in - features two parallel storylines whose surviving characters meet up towards the end.

The first storyline involves a young woman named Kudo Michi () who works at a plant sales company. She has recently moved to the city and her main friends are her three colleagues; Sasano Junko, Toshio Yabe and Taguchi. At the start of the film, it appears Taguchi has been missing for some days working on a . Michi goes to visit his apartment and finds him physically okay, albeit distracted. When Michi's back is turned, Taguchi hangs himself in a manner as abrupt as it is casual.

She and her colleagues ponder why Taguchi committed suicide but cannot find any answers, although there are clues on the computer disk Taguchi was working on, including an image of his apartment with Taguchi's ghostly face reflected in a . Yabe later receives a phone-call that seems to be of Taguchi saying "Help me", over and over, so he goes to his deceased colleague's apartment and sees a ghostly black image imprinted on the wall where Taguchi was hanging against. Yabe leaves but spies a door to a nearby apartment which has been taped up with bright red tape. He rips the tape off and enters, only to encounter a ghostly woman who approaches him silently while he desperately hides under a sofa.

After that encounter, Yabe becomes despondent and lethargic, hiding in his apartment and refusing to leave. Later, Michi receives a phone-call whereby Yabe intones "Help me" over and over. She goes to his apartment but Yabe is not there; there is merely a black stain on the wall. She leaves in fear.

Michi and Junko are soon alone at their workplace, with their boss having also dropped out of sight. Doors with red-tape over the edges are cropping up all over Tokyo, and Junko enters one of them, where she encounters a ghostly woman. Junko is rescued by Michi, who takes her to her apartment, but Junko is rendered lethargic and uncommunicative. When Michi's back is briefly turned, Junko asks her "Am I just going to die like this?" Michi cheerfully responds "No, of course not," but when she turns round, Junko has vanished, leaving just a sad black stain on the wall.

The other storyline features Kawashima Ryosuke (), an who decides to get onto the ; he knows nothing about but feels compelled to join in the internet fad. He signs up to an (using , as this was before became commonplace) but watches in confusion and then horror when his computer automatically connects to a series of images showing lethargic and depressed looking people in darkened rooms, before showing the text "Do you want to meet a ghost?"

Ryosuke turns the computer off and the next day asks advice from a computer expert, a fellow student named Harue Karasawa (). She suggests a hacker may have been responsible for his odd experiences and advises him on how to take the address of the site should it happen again. Ryosuke tries this advice the next night, when his computer dials up on its own, but he unplugs the computer in terror when he sees a webcam image of a man sitting in a chair with a bin-bag on his head and the words "Help me" scrawled repeatedly on the wall behind him.

He gets in touch with Harue again, but she does not have much of an explanation as to what is going on. One of her fellow students, Yoshizaki, does, and in fact he ties in Ryosuke's experiences with the appearances of ghostly looking people who can be seen around campus. Yoshizaki explains his theory that the place where dead people's go to is somehow filled up, and the souls (or ghosts) are spilling out and invading the physical world - somehow employing the internet to do so - and that this is behind the rash of people vanishing or losing the will to live and subsequently committing .

Throughout the two storylines, Tokyo is rapidly and inexplicably being emptied of people. At one point, Michi goes to a local shop, which is empty, save for a ghostly man lurking behind the counter. Towards the start of the film, Ryosuke visits a , which is packed with other people, but when he goes there a few days later it is empty, apart from a bizarre, ghostly apparition that compels him to flee in terror.

Harue subsequently drops out of sight too, and Ryosuke ends up drifting aimlessly around an increasingly desolate Tokyo, where he meets Michi, who - having seen her colleagues and friends all either kill themselves or vanish - was driving aimlessly in the hope of finding someone, only for her car to break down.

Ryosuke and Michi team up and try to find Harue. She turns up in an abandoned factory, where she shoots herself in the head in front of Ryosuke and Michi. The latter two are compelled to drive off, but not before Ryosuke stops to obtain some fuel and ends up wandering into a room whose door was previously sealed up with red tape. There he encounters a ghost who mournfully explains that "death was eternal loneliness" and pleads "help me".

At that point, Ryosuke seemingly loses the will to live, and Michi has to all but drag him to safety. They drive through Tokyo, which is deserted and desolate, with parts of it on fire. Along the way they encounter many scenes of an almost apocalyptic nature, such as a military plane crashing and the sky darkened by the fires raging through an empty Tokyo.

Finally, the pair make it to a ship crewed by a small group of survivors. Ryosuke is slumped against a wall in a cabin when he vanishes, leaving a black stain; Michi is left on her own with the other few survivors. The captain () states that they are heading towards because they have received "signals" from that location, indicating that there are survivors there. This makes it clear that the whole of the planet - not just Tokyo - has seen an apocalyptic de-population of humanity.

The film ends with Michi watching Ryosuke vanish and - through a voice-over narration - declaring "Now, alone with my last friend in the world, I have found happiness."

The Ghosts and the Afterlife

The ghosts in the film take two forms.

First are those, apparently leaking into this world through the Internet, who resemble the spirits in other J-horror films like and . These appear as amorphous black forms that coalesce into human shapes and move with stuttering steps. Their features, when visible at all, are blurry. The one exception is the ghost that attacks Ryosuke at the end, whose eyes become sharp at the last moment.

The other type of ghost takes the form of black silhouettes, a sort of inversion of the ones found on walls after the . These ghosts appear after people commit suicide, or when they disappear in despair as Junko does. Several people in the film see these silhouettes revert back to human form briefly, but they appear to be immobile. Harue suggests that the ghosts don't want more company and are trapping people in their loneliness, but this is purely speculation on her part.

Several characters in the film discuss their notions of the afterlife. Yoshizaki believes it to be a separte realm with a finite capacity. Harue however says that she fears the other side is "right now, forever," a sort of existential hell. However Ryosuke denies all these possibilities and claims the material world is all that counts, and people should make the most of it. He tries to cheer Harue up with the idea that someday soon science will be able to make people immortal, but she finds no solace in the idea.

In his final confrontation with the ghost in the factory, Ryosuke proclaims that he will catch the ghost (as he had tried to do earlier in the library) and it will disappear because it is not real. But when he touches the specter it remains solid. The ghost shouts that it is real. In the end, Ryosuke's strength of will cannot match the ghost.