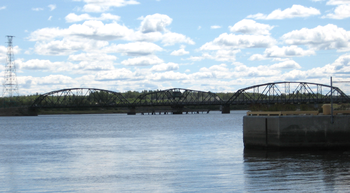 A photograph of the Morrissy Bridge

Although construction of the bridge began in 1913, the bridge was completed and opened in November 1914. Named after Hon. John Morrissy, the Minister of Public Works, it was hailed as "one of the greatest structures in the province", and provided the first fixed road link between the former town of Newcastle and communities on the south side of the river. The bridge created a new obstacle for navigation, but a swing span in the bridge, allowed large vessels to pass.

The Morrissy Bridge was badly damaged on November 5, 1971 when the Panamanian registered Liberty Ship Grand Valor struck the second pier of the bridge while departing the Newcastle Wharf with a load of pulpwood. Several heavy trusses were knocked out and the swing span was moved off its bearing pad. Repairs took 3 weeks and the vessel was arrested and later released.

The swing span is no longer used, and the narrow deck of the bridge is now viewed as substandard. The new Miramichi Bridge completed in 1995 provides a wider, safer crossing only 1 km upstream. It has created a newer, permanent obstacle to upstream navigation.

In 2008 the New Brunswick Department of Transportation[1] carried out a detailed structural analysis and concluded that the bridge's steel deck supports had corroded to the point where the bridge was no longer safe for use. The Morrissy Bridge was closed permanently because of safety concerns Friday, September 12, 2008.[2] The bridge will be dismantled, and not be replaced.[3]