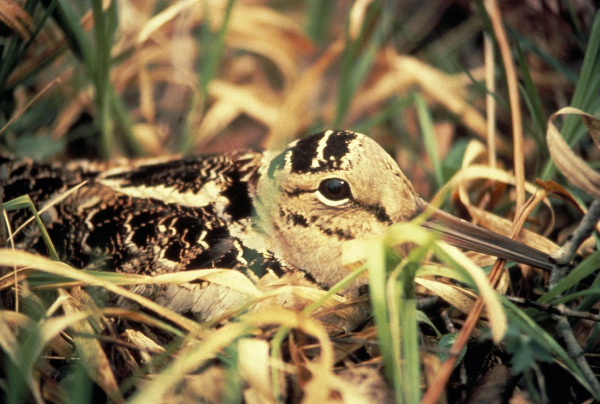 The woodcocks are a group of seven extant very similar wading in the "Scolopax", characterised by a long slender bill and cryptic brown and blackish plumage. Only two woodcocks are widespread, the others being localised island species. Their closest relatives are the typical s of the genus "Gallinago" (Thomas "et al.", 2004).

These are woodland birds which feed at night or in the evenings, searching for invertebrates in soft ground with their long bills. Unlike in most birds the tip of the upper mandible is flexible. [Mousley, H. (1934) The earliest (1805) unpublished drawings of the flexibility of the upper mandible of the woodcock's bill. Auk. 51(3):297-301] This habit and their unobtrusive plumage makes it difficult to see them when they are resting in the day. The tiny feathers that are located at the first joint of the woodcock's wings are referred to as "pin feathers" and these are much sought after by artists for fine painting work.

Most have distinctive displays known as roding, usually given at dawn or dusk. These are birds with stocky bodies and long bills. They have eyes set on the sides of their heads, which gives them almostSpecify|date=March 2008 360° vision.Fact|date=March 2008

A number of woodcocks have become long ago and are known only from or bones. Due to their close relationship to the "Gallinago" snipes, the woodcocks are a fairly young group of birds, even considering that the themselves are an ancient lineage. "Gallinago" and "Scolopax" diverged probably around the Late , some 10-5 mya.