Coins of the South African rand

Coins of the South African rand 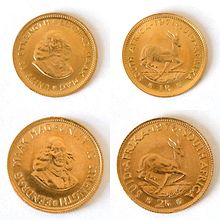 The rand was introduced in South Africa in February 1961, after the referendum of November 1960 which established autonomy from the British Empire, but before the new status came into effect in May 1961. The coins bear the forward-facing portrait of Jan van Riebeeck on the obverse.

The initial circulation coins of the Republic were the following:[1]

The coins initially had the same size as the British coins. All except the 1/2 and 1 cent coins were in silver.

In addition, two bullion coins with denominations of 1 R and 2 R were issued, replacing the gold half-pound and pound coins introduced in 1952. Both the pound and the rand gold coins matched the specifications of the British half-sovereign and sovereign (minted, among others, at the Pretoria branch mint until 1932), including the gold alloy (crown gold) with a fineness of 22 carat (91.67%). The reverse of the gold rand coins features the well-known springbok illustration designed by Coert Steynberg for the 5-shilling coin introduced in 1948.

Initially the coinage bore the portrait of Van Riebeeck, and later the state presidents or the South African coat of arms. The country name was given in Afrikaans, English or both. The 1/2 cent coin was discontinued in the 1970s.

The gold rand coins were minted until 1983. Starting in 1967, however, they were gradually replaced by the Krugerrand coins, especially after the issue of the smaller Krugerrand denominations from 1/10 to 1/2 oz in 1980.

Minting of 1c and 2c coins ceased at the end of March 2002. All cash transactions are rounded to the nearest 5c.[3] The coins are still legal tender, but have more or less disappeared from circulation.

A new bi-metallic R5 coin with added security features, including a grooved edge and micro-lettering on the reverse, was introduced in 2004.[4]