Neil Mallon Bush (born January 22, 1955) is the fourth of six children of former President George Herbert Walker Bush and Barbara Bush (Barbara Lane Pierce). His five siblings are George Walker Bush, the former President of the United States; Jeb Bush, the former governor of Florida; Robin Bush, who died of leukemia in 1953 at the age of four; Marvin; and Dorothy. Bush is currently a businessman based in Texas.

Bush was born in Midland, Texas. He was named after a good friend of the family, Henry Neil Mallon, chairman of Dresser Industries, George H. W. Bush's employer. As a child Bush spent some summers and holidays at his family's estate in Maine, the Bush Compound.

At age 11, he entered the exclusive St. Albans School in Washington, DC. He struggled through school; a counselor told his mother that it was doubtful the boy had the potential to graduate. He was later diagnosed as having dyslexia, and his mother spent much time coaching him through his learning disability. Eventually his grades improved and he graduated from St. Albans in 1973.

After St. Albans, Bush attended Tulane University, where he earned an economics degree in 1977. He earned an MBA in 1979.[1] 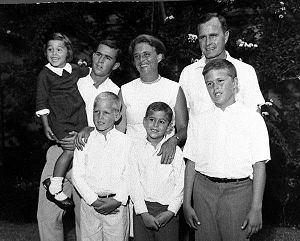 Neil Mallon Bush is the leftmost person in the front row in this photograph of the Bush family taken in the early 1960s.

Neil Bush is the Chairman of the Points of Light Institute; a foundation that works to increase volunteer-ism in the world. [2]

Neil Bush was a member of the board of directors of Denver-based Silverado Savings and Loan during the 1980s' larger Savings and Loan crisis. As his father, George H.W. Bush, was Vice President of the United States, his role in Silverado's failure was a focal point of publicity. According to a piece in Salon, Silverado's collapse cost taxpayers $1.3 billion.[3]

The US Office of Thrift Supervision investigated Silverado's failure and determined that Bush had engaged in numerous "breaches of his fiduciary duties involving multiple conflicts of interest." Although Bush was not indicted on criminal charges, a civil action was brought against him and the other Silverado directors by the Federal Deposit Insurance Corporation; it was eventually settled out of court, with Bush paying $50,000 as part of the settlement, as reported in the Style section of the Washington Post.[4]

A Republican fundraiser set up a fund to help defer costs Neil incurred in his S&L dealings.[5]

In 1999, Bush co-founded Ignite! Learning, an educational software corporation. Bush has said he started Austin-based Ignite! Learning because of his learning difficulties in middle school and those of his son, Pierce.[6] The software uses multiple intelligence methods to provide varying types of content to appeal to multiple learning styles.

In 2002, Neil Bush commended his brother, George, for his efforts on education as President, but he questioned the emphasis on constant testing to keep federal aid coming to public schools: “I share the concerns of many that if our system is driven around assessments, pencil-and-paper tests that test a kid's ability to memorize stuff, I would say that reliance threatens to institutionalize bad teaching practices.”[7]

A December 2003 Style section article in the Washington Post reported that Bush's salary from Ignite! was $180,000 per year.[4]

Bush's relationship with the controversial oligarch Boris Berezovsky, a political enemy of Russian President Vladimir Putin currently under indictment for fraud in Russia and an applicant for asylum in the United Kingdom,[10] has been noted in the media. Berezovsky has been an investor in Bush's Ignite! program since at least 2003.[11] Bush met with Berezovsky in Latvia. The meeting caused tension between that country and Russia due to Berezovsky's fugitive status.[11] Bush was also seen in Berezovsky's box at an Arsenal's Emirates stadium for a game in 2006,[12] which prompted some stateside criticism.[13] There has also been speculation in the English language Moscow Times that the relationship may cause tension in U.S.-Russian bilateral relations, "especially since Putin has taken pains to build a personal relationship with the U.S. president."[14]

In July 1999, Bush made at least $798,000 on three stock trades in a single day of a company where he had been employed as a consultant. The company, Kopin Corporation of Taunton, Massachusetts, announced on the same day good news about a new Asian client that sent its stock value soaring. Bush stated that he had no inside knowledge and that his financial advisor had recommended the trades. He said, "any increase in the price of the stock on that day was purely coincidental, meaning that I did not have any improper information."[15]

Foundation for Interreligious and Intercultural Research and Dialogue

Bush was a founding director, along with Pope Benedict XVI (then Cardinal Joseph Ratzinger), of the Foundation for Interreligious and Intercultural Research and Dialogue (FIIRD). The foundation promotes ecumenical understanding and publishes religious texts and was founded in 1999. Bush is no longer on the board of the foundation.[17]

In 2002, Bush signed a consulting contract that paid $2 million dollars in stock over five years to work for Grace Semiconductor Manufacturing Corp., a firm backed by Jiang Mianheng, the son of former Chinese President Jiang Zemin, plus $10,000 for every board meeting he attends.[18]

Bush serves as co-chairman of a company called Crest Investment. Crest pays him $60,000 a year to provide miscellaneous consulting services.[17][19]

Bush frequently travels to the Middle East, Europe and Asia to negotiate deals and raise capital for various businesses. According to court filings from his divorce, in 2000 he was paid $1.3 million for such work. This includes $642,500 as a commission for introducing an Asian investor to the owners of an American high-tech company.[20]

In 2002, Neil Bush told the New York Post that he "endured his own Ritalin hell seven years ago when educators in a Houston private school diagnosed his son, Pierce, (then) 16, with Attention Deficit Disorder (ADD) and pushed medication."

Bush spent years researching the issue and found that "the educators were wrong" about his son. "There is a systemic problem in this country, where schools are often forcing parents to turn to Ritalin," he said. "It's obvious to me that we have a crisis."

Also that year, Bush testified before a hearing of the United States Congress to speak out against over-medicating children for learning disorders.

He has suggested that many parents believe the ADD and ADHD diagnoses and subsequent medicating of their children because it explains why they aren't doing well in school, saying "it's the system that is failing to engage children in the classroom. My heart goes out to any parents who are being led to believe their kids have a disorder or are disabled."[22]

Neil Bush (along with filmmaker Michael Moore) is credited in the cast of a 2005 documentary called The Drugging of Our Children[23] directed by Gary Null. In the film's trailer[24] Bush says: "Just because it is easy to drug a kid and get them to be compliant doesn't make it right to do it".

Bush and his former wife for 23 years, Sharon Smith, are the parents of three children, including Lauren. The couple divorced in April 2003.

Bush's divorce deposition gained public attention when he admitted to several sexual encounters with high-priced escorts/prostitutes in Thailand and Hong Kong in which he admitted to catching the STD herpes.[20][25][26][27] Among other divorce testimony aired in the press, Bush's friend John Spalding announced that Sharon had extracted hair samples from her estranged husband in order to place a voodoo curse on him. Sharon Bush later confirmed the forcible hair removal, but she stated that she took the hair to be tested for evidence of drug use.[28] At various times, she publicly spoke of her fear of retribution by Bush, or by the Bush family.

Bush remarried in Houston, Texas, on March 6, 2004, to Maria Andrews. Andrews spent time volunteering with charitable organizations with Bush's mother, Barbara. Robert Andrews, Andrews' ex-husband, sued Sharon Bush in September 2003 for defamation after she alleged that her ex-husband was the father of Andrews' two-year-old son.[28]

Bush has often been invited to speak to audiences overseas. Bush says he has courtesy visits with world leaders but has no plans to wade into foreign policy. "Oftentimes because of my father's goodwill, and because of the president being who he is, people might extend an invitation, and it's enjoyable for me," Bush said. "Some of these folks are family friends."[29]

Speaking at a Saudi Arabian economic forum in January 2002, Bush referred to growing anti-American sentiment in Arab countries and said the two peoples must communicate better. He said the Arab P.R. machine is not as good as Israel's.[30]

The Bush-era White House appeared unfazed by his world travel. "The president knows his brother will always do the right thing," press secretary Ari Fleischer said."[29]

In Asia, Bush accompanied Sun Myung Moon, the founder of the Unification Church, on his world peace tour.[31] In 2009 Bush congratulated Moon on the publication of his autobiography at a Unification Church sponsored event. He was quoted as saying: "Rev. Moon is presenting a very simple concept. We are all children of God." [32]