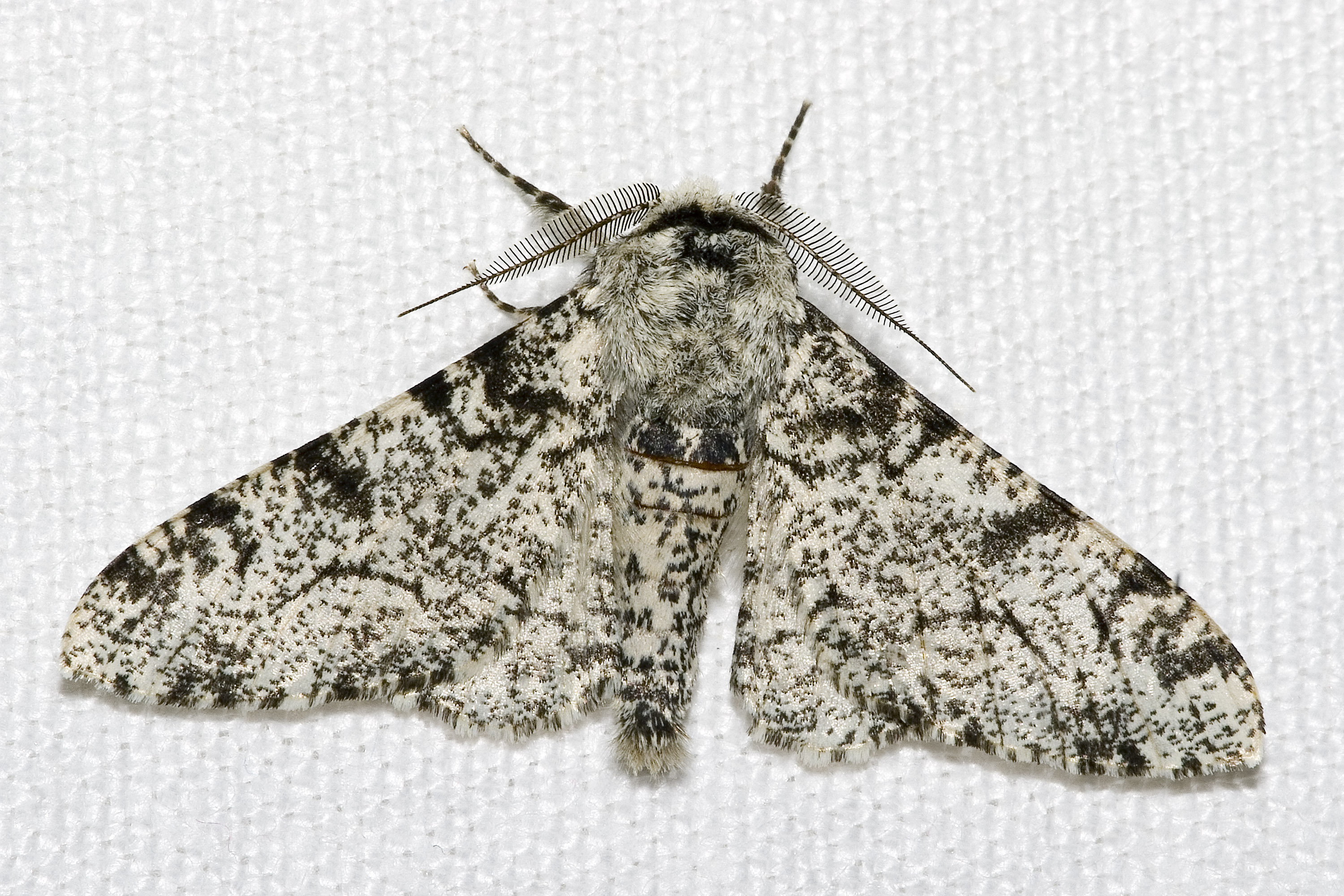 The peppered moth ("Biston betularia") is a temperate species of night-flying . is often used by educators as an example of .

In Britain, the peppered moth is univoltine (i.e. it has one generation per year), whilst in south-eastern North America it is bivoltine (two generations per year). The n life cycle consists of four stages: ova (eggs), several l s (s), e, which overwinter live in the soil, and imagines (adults). During the day, the moths typically rest on trees, where they are preyed on by birds.

The caterpillar is a twig , varying in colour between green and brown. It goes into the soil late in the season, where it pupates in order to spend the winter. The imagines emerge from the pupae between late May and August, the males slightly before the females (this is common and expected from ). They emerge late in the day and dry their wings before flying that night.

The males fly every night of their lives in search of females, whereas the females release s to attract males, only flying on the first night. Since the pheromone is carried by the wind, males tend to travel up the , i.e., towards the source. During flight, they are subject to predation by s. The males guard the female from other males until she lays the eggs. The female lays about 2,000 pale-green ovoid eggs about 1 mm in length into crevices in bark with her .

A mating pair or a lone individual will spend the day hiding from predators, particularly birds. In the case of the former, the male stays with the female to ensure paternity. The best evidence for resting positions is given by data collected by the peppered moth researcher , and it is given in the accompanying charts. These data were originally published in Howlett and Majerus (1987), and an updated version published in Majerus (1998), who concluded that the moths rest in the upper part of the trees. Majerus notes:

critics of the peppered moth have often pointed to a statement made by Clarke "et al". (1985): "... In 25 years we have only found two "betularia" on the tree trunks or walls adjacent to our traps, and none elsewhere". The reason now seems obvious. Few people spend their time looking for moths up in the trees. That is where peppered moths rest by day.

From their original data, Howlett and Majerus (1987) concluded that peppered moths generally rest in unexposed positions, using three main types of site. Firstly, a few inches below a branch-trunk joint on a tree trunk where the moth is in shadow; secondly, on the underside of branches and thirdly on foliate twigs. The above data would appear to support this.

During an experiment in over the seven years 2001-2007 Majerus noted the natural resting positions of peppered moths, and of the 135 moths examined over half were on tree branches, mostly on the lower half of the branch, 37% were on tree trunks, mostly on the north side, and only 12.6% were resting on or under twigs.

There are several melanic and non-melanic morphs of the peppered moth. These are controlled genetically. A particular morph can be indicated in a standard way by following the species name in the form "morpha "morph name".

It is a common mistake to confuse the name of the morph with that of the or , hence mistakes such as "Biston carbonaria" and "Biston betularia carbonaria". This might lead to the erroneous belief that was involved in the observed evolution of the peppered moth. This is not the case; individuals of each morph interbreed and produce fertile offspring with individuals of all other morphs; hence there is only one peppered moth species.

In continental Europe, there are three morphs: morpha "typica", the typical white morph (also known as "morpha "betularia"), morpha "carbonaria", the melanic black morph (also previously known as "morpha "doubledayaria"), and morpha "medionigra", an intermediate semi-melanic morph. European breeding experiments have shown that in "Biston betularia betularia", the for melanism producing morpha "carbonaria" is controlled by a single locus. The melanic allele is dominant to the non-melanic allele. This situation is, however, somewhat complicated by the presence of three other alleles that produce indistinguishable morphs of morpha "medionigra". These are of intermediate dominance, but this is not complete (Majerus, 1998).

In Britain, the typical white speckled morph is known as morpha "typica", the melanic morph is morpha "carbonaria", and the intermediate is morpha "insularia".

At present, the precise and of the melanism in this species remains unknown. True (2003) has reviewed this and suggests work based on s from other insects such as the fruit fly "". In any case, it is rather likely that the underlying mechanism is not overly complex and, as indicated above, does not involve very many s and s: Unlike for example the variation seen in , Peppered Moth morphs are not clinal and can generally be readily distinguished from another.

The evolution of the peppered moth over the last two hundred years has been studied in detail. Originally, the vast majority of peppered moths had light coloration, which effectively d them against the light-colored trees and lichens which they rested upon. However, due to widespread pollution during the in England, many of the lichens died out, and the trees which peppered moths rested on became blackened by , causing most of the light-colored moths, or "typica", to die off due to predation. At the same time, the dark-colored, or melanic, moths, "carbonaria", flourished because of their ability to hide on the darkened trees.

Since then, with improved environmental standards, light-colored peppered moths have again become common, but the dramatic change in the peppered moth's population has remained a subject of much interest and study, and has led to the coining of the term "industrial melanism" to refer to the genetic darkening of species in response to pollutants. As a result of the relatively simple and easy-to-understand circumstances of the adaptation, the peppered moth has become a common example used in explaining or demonstrating to laypeople and classroom students.

The first "carbonaria" morph was recorded by Edleston in Manchester in 1848, and over the subsequent years it increased in frequency. Predation experiments, particularly by , established that the agent of selection was birds who preyed on the morpha "carbonaria" morph.

Jonathan Wells is one of a number of creationists who have criticized the use of peppered moth melanism as an example of evolution in action. In his book "", Wells alleges that peppered moth studies, and in particular Kettlewell's experiments, were erroneous and fraudulent.