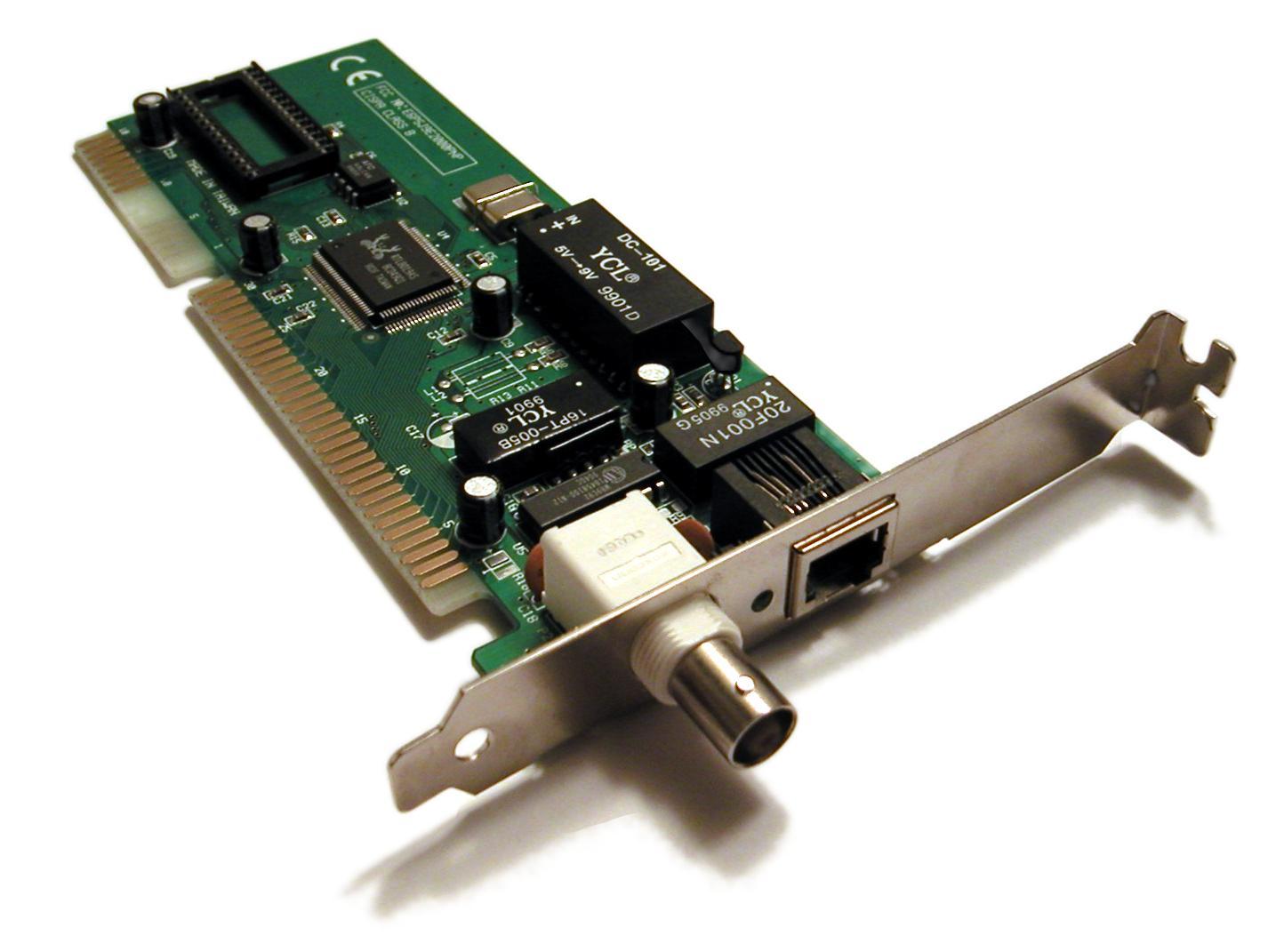 A Network card, Network Adapter, LAN Adapter or NIC (network interface card) is a piece of designed to allow computers to communicate over a . It is both an OSI layer 1 () and layer 2 () device, as it provides physical access to a networking medium and provides a low-level addressing system through the use of es. It allows users to connect to each other either by using cables or wirelessly.

Although other network technologies exist, has achieved near-ubiquity since the mid-1990s. Every Ethernet network card has a unique 48-bit serial number called a , which is stored in ROM carried on the card. Every computer on an Ethernet network must have a card with a unique MAC address. No two cards ever manufactured share the same address. This is accomplished by the (), which is responsible for assigning unique MAC addresses to the vendors of network interface controllers.

Whereas network cards used to be s that plug into a computer bus, the low cost and ubiquity of the Ethernet standard means that most newer computers have a network interface built into the . These either have Ethernet capabilities integrated into the motherboard chipset, or implemented via a low cost dedicated Ethernet chip, connected through the PCI (or the newer bus). A separate network card is not required unless multiple interfaces are needed or some other type of network is used. Newer motherboards may even have dual network (Ethernet) interfaces built-in.

The card implements the electronic circuitry required to communicate using a specific and standard such as or . This provides a base for a full network , allowing communication among small groups of computers on the same and large-scale network communications through routable protocols, such as IP.

There are four techniques used to transfer data, the NIC may use one or more of these techniques.

A network card typically has a , BNC, or AUI socket where the network cable is connected, and a few LEDs to inform the user of whether the network is active, and whether or not there is data being transmitted on it. Network Cards are typically available in 10/100/1000 Mbit/s varieties. This means they can support a transfer rate of 10, 100 or 1000 Megabits per second.

A Network Interface Controller (NIC) is a hardware interface that handles and allows a network capable device access to a such as the . The NIC has a ROM chip that has a unique Media Access Control (MAC) Address burned into it. The MAC address identifies the vendor and the serial number of the NIC which is unique to the card. Every NIC has a unique MAC address which identifies it on the LAN. The NIC exists on both the '' (Layer 1) and the 'Data Link Layer' (Layer 2) of the .

Sometimes the word 'controller' and 'card' is used interchangeably when talking about networking because the most common NIC is the Network Interface Card. Although 'card' is more commonly used, it is in less encompassing. The 'controller' may take the form of a network card that is installed inside a , or it may refer to an embedded component as part of a computer motherboard, a , , printer interface, or a device.

A MAC Address is a unique 48 bit network hardware identifier that is burned into a ROM chip on the NIC to identify that device on the network. The first 24 bits is called the (OUI) and is largely manufacturer dependent. Each OUI allows for 16,777,216 Unique NIC Addresses.

Smaller manufacturers that do not have a need for over 4096 unique NIC addresses may opt to purchase an (IAB) instead. An IAB consists of the 24 bit OUI, plus a 12 bit extension (taken from the 'potential' NIC portion of the )