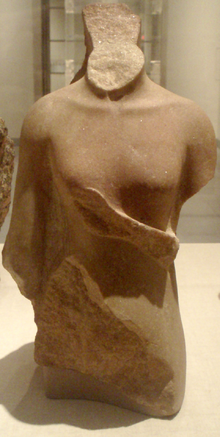 Fragmentary quartzite statue of the Amarna princess Meketaten, from the reign of Akhenaten, circa 1352-1336 B.C. On display at the Brooklyn Museum. The broken hand over the figure's right breast was common to images depicting young girls, and likely once held a flower or rattle.

Meketaten ("Behold the Aten" or "Protected by Aten") was the second daughter of six born to the Egyptian Pharaoh Akhenaten and his Great Royal Wife Nefertiti. She was probably born in year 4 of Akhenaten's reign. Although little is known about her, she is frequently depicted with her sisters accompanying her royal parents in the first two thirds of Akhenaten's seventeen year reign.

Meketaten was the second daughter born to Akhenaten and Nefertiti. She had an older sister named Meritaten and four younger sisters named Ankhesenpaaten, Neferneferuaten Tasherit, Neferneferure and Setepenre. Tutankhaten was a half-brother.[1]

Meketaten’s approximate year of birth is in or before year 4 of Akhenaten.[2] Meketaten is first depicted on the walls of the Hut-benben temple dedicated to her mother Nefertiti in Thebes. Meketaten appears behind her older sister Meritaten in some of the later inscriptions, thought to date to year 4 or later.[3] Further arguments to suggest Meketaten was born in or before year 4 come from the fact that her figure was added to one of the boundary stela recording events in year 4 and carved in year 5.[4]

Meketaten moved to the new capital city Akhetaten with her family when she was still a small child. She is depicted in several of the tombs of the nobles in Amarna. Meketaten is depicted in the tomb of Ay holding a tray of gifts while wrapping one arm around her mother’s neck.[2] Other monuments mentioning Meketaten include a stela from Heliopolis, a statue base from the Fayoum, and the tombs of Panehesy and Parennefer.[5] Meketaten was depicted with her parents and sisters at the reception of foreign tributes – a ceremony dating to year 12 - that can be seen on several scenes in the private tombs in Amarna of high-ranking officials named Huya and High Priest Meryre II.[2][3]

Meketaten died in approximately year 14 of Akhenaten.[3] It is very likely that a plague swept across Egypt between Akhenaten's 12th and 15th regnal years, for many members of the royal family cease to be mentioned again; among them Queen Mother Tiye, Queen Nefertiti, Akhenaten's secondary wife Kiya, Meketaten and the two youngest princesses, Neferneferure and Setepenre.[2] Meketaten's death could have resulted either from a plague, or from childbirth. The presence of a royal baby causes many to believe the young princess died in childbirth (in this case the father is most likely to had been Akhenaten himself, marrying his daughter), but it cannot be proven.[2] An alternative interpretation suggested by van Dijk is that the child depicted in the scenes is the soul (the ka) of Meketaten.[4]

Meketaten under the canopy, on the wall paintings of the Chamber γ. In front of her: Akhenaten, Nefertiti, Meritaten, Ankhesenpaaten and Neferneferuaten Tasherit.

and γ of the Royal Tomb are believed to be used for the burials. Chambers α and γ depict very similar scenes: Akhenaten and Nefertiti bend over the inert body of a woman, weeping and gripping each other's arms for support. Nearby a nurse stands with a baby in her arms, accompanied by a fan-bearer, which indicates the baby's royal status. The names in the scene in chamber α have been hacked out. In the chamber γ however the hieroglyphs identify the dead young woman as Meketaten. In the same chamber another scene shows Meketaten standing under a canopy which is usually associated with childbirth but can also interpreted as representing the rebirth of the princess. In front of her, amongst courtiers, stand Akhenaten,. Nefertiti and their three remaining daughters, Meritaten, Ankhesenpaaten and Neferneferuaten Tasherit.[4]

It is possible that chamber α was the burial place of someone other than Meketaten. There may even have been two burials which may have been those of Neferneferure and Setepenre, but this is not certain.[4] Another theory is that one of the scenes depicts Kiya and that the baby is Tutankhamun.[2]

Fragments of Meketaten’s sarcophagus were found in the royal tomb. Inscriptions mention her parents Akhenaten and Nefertiti, her sister Ankhesenpaaten as well as her grand-parents Amenhotep III and Queen Tiye.[5]