The Mexican Hairless Dog is a rare, hairless breed of dog, the size of which varies greatly. It is also known as Xoloitzcuintle (Spanish pronunciation: [ʃoloit͡sˈkwint͡ɬe]; English: /ʃoʊlɔɪtsˈkwiːntli/ shoh-loyts-kweent-lee).

The Xolo is native to Mexico. Archaeological evidence shows that the breed has existed in Mexico for more than 3,000 years.[1] Most likely, early forerunners of the Xolo originated as spontaneous hairless mutations of indigenous American dogs. Hairlessness may have offered a survival advantage in tropical regions. Indigenous peoples of Central and South America had Xolo dogs as home and hunting companions, and today they are still very popular companion dogs; even as the national dog of Mexico. Their value in ancient native cultures is evidenced by their frequent appearance in art and artifacts, e.g., those produced by the Colima, Aztec and Toltec civilizations in Mexico.

Xolos were considered sacred dogs by the Aztecs (and also Toltecs, Maya and some other groups) because they believed the dogs were needed by their masters’ souls to help them safely through the underworld, and also they were useful companion animals. According to Aztec mythology, the god Xolotl made the Xoloitzcuintle from a sliver of the Bone of Life from which all mankind was made. Xolotl gave this gift to Man with the instruction to guard it with his life and in exchange it would guide Man through the dangers of Mictlan, the world of Death, toward the Evening Star in the Heavens. Some people in Mexico continue to believe this breed has healing qualities. The Aztecs also raised the breed for their meat. Sixteenth-century Spanish accounts tell of large numbers of dogs being served at banquets.[2]

When Columbus arrived in the Caribbean in 1492, his journal entries noted the presence of strange hairless dogs. Subsequently, Xolos were transported back to Europe. 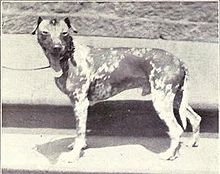 The breed is not well known in the US, even in Texas (which is among the states which border Mexico). As a result, the Xolo has been mistaken for the mythical Chupacabra of Mexico.[3]

The Xoloitzcuintle is the symbol of Club Tijuana, a Mexican professional football club. 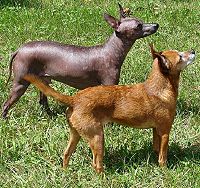 Hairless and Coated Xoloitzcuintles side by side

Despite the Xolo's more than 3000 year history in Mexico, the breed did not receive any official notice there until the 1950s. The FCM, founded in 1940, was not prepared to declare the Xolo an official purebred at that time. According to breed historian, Norman Pelham Wright, author of The Enigma of the Xoloitzcuintli Xolos began to turn up at Mexican dog shows in the late 1940s. While it was recognized that these were indigenous specimens of a native breed, interest in them was minimal at that time. Information was scarce and no standard existed by which to judge them. Within a decade the FCM realized that the breed would be extinct if drastic action were not taken to save it. This led to the widely publicized Xolo Expedition of 1954. With the official sanction of FCM, Wright and a team of Mexican and British dog authorities set off to discover if any purebred Xolos still existed in remote areas of Mexico.

Eventually ten good Xolos were found and these dogs formed the foundation of Mexico's program to revive the breed. A committee headed by Wright authored the first official standard for the breed; and, on May 1, 1956, the Xolo was finally recognized in its native land and, as Mexico is a member of the FCI, worldwide too.

Xolos were among the first breeds recorded by the American Kennel Club (AKC). A Mexican dog named Mee Too made breed history as the first AKC registered Xolo in 1887. Chinito Junior, bred and owned by Valetska Radtke of New York City became the breed's only AKC champion to date. He earned his title on October 19, 1940.

In 1959, the Xolo was dropped from the AKC stud book due to the breed's scarcity and perceived extinction. The Xoloitzcuintli Club of America (XCA) was founded in October 1986 to regain AKC recognition for the breed. On May 13, 2008, AKC voted to readmit the breed to its Miscellaneous Class starting January 1, 2009. The XCA is the official parent club for the breed, founded on October 26, 1986 for the purpose of regaining AKC recognition for the Xoloitzcuintli. The founding members voted unanimously to recognize all three sizes (toy, miniature and standard) and both varieties (hairless and coated) at their initial meeting. Since then, the XCA has compiled a stud book modeled on requirements for eventual AKC acceptance, held an annual independent specialty show, published a quarterly newsletter, The Xolo News, and maintained an active national rescue network, National Xolo Rescue (known before 2009 as The Xolo Rescue League[4]). As of January 1, 2007, FSS registered Xolos are eligible to compete in AKC performance events. The breed will be moved into the AKC Studbook in December 2010 and will be eligible to be shown in the AKC Non-Sporting group as of January 1, 2011.[5]

The first AKC Group Winning Xolo was Bayshore Mole who won a Group 4 placement February 2, 2011 and this was followed up by his littermate Bayshore Georgio Armani receiving back to back group placement. On August 8, 2011 Bayshore Georgio Armani became the fist Xolo to be named Best in Show in AKC competition. Not to be outdone, Bayshore Mole became the first Xolo to win back to back Best in Shows on September 3rd and 4th, 2011. Both dogs were bred by Bayshore Kennel in Virginia.[citation needed]

Characteristics of the Xolo

The breed ranges in size from about 10 to 50 lb (4 to 20 kg). Similar in appearance to a Pharaoh Hound, with a sleek body, almond-shaped eyes, large bat-like ears, and a long neck, the Xolo is notable for its dominant trait of hairlessness.[6] The dominant hairless trait originated in this breed as a spontaneous mutation thousands of years ago. The recessive expression of the trait will produce a coated variety, which is genetically inseparable from the hairless. Most litters contain both hairless and coated puppies. The coated variety, covered with a short, flat dense coat represents the original form of the dog, prior to the occurrence of the spontaneous hairless mutation.[7] The hairless variety is completely hairless on the body. Some dogs exhibit a few short hairs on the top of the head, the toes and tip of the tail. Most hairless dogs are black or blue in color. According to standard genetic ratios, one out of every four puppies should be born coated. The allele responsible for the Xolo's hairlessness also affects the dog's dentition: Xolos typically have an incomplete set of teeth.

The Xolo is moderate in all aspects of its appearance, conveying, strength, agility and elegance. Xolo body proportions are rectangular, slightly longer in total body length than the height measured at the highest point of the withers. The breed occurs naturally in two varieties, hairless and coated. Hairless Xolos are the dominant expression of the heterozygous Hh hairless trait.[8] Coated Xolos (hh) are the recessive expression. Breeding hairless to coated or hairless to hairless may produce pups of either or both varieties. Breeding coated to coated will only produce coated pups because they are recessive to the hairless trait and do not carry the dominant H gene.

Both varieties occur in all colors, solid, marked, splashed or spotted. The most common colors are various shades of black, blue, and red. The breed occurs in a range of sizes, which breeders have standardized into three designations:

Adult Xolos are noted for their calm demeanor, but puppies can be extremely high energy, noisy and often chewy until maturity (after 2 years old), when they settle down and become calmer. The Xolo breed has definite primitive temperament traits (very high intelligence, high energy, inquisitiveness, strong hunting and social instincts). Thus Xolos today can be escape artists, climbing and jumping fences to chase small animals. They possess guard dog ability and will not back down from a fight, yet as adults, when raised properly, are known to become steady, well-trained and affectionate companions.

This is because the breed temperament overall has not been tampered with in their native thousands-year history in the central americas, because that temperament was a good fit for free-roaming family, farm and hunting dog companions among the pre-colonial Indian cultures. This has also ensured a healthy, sturdy physical nature generally innate in both coated and uncoated xolos.

Xolo behavioral temperament, like other breeds, remains true when bred and raised properly, with the strategic breeder priority focused on the maintenance of true physical and temperament breed quality and responsible adopter ownership, rather than money. Given good breeding and wise ownership, as with any dog breed, a wonderful companion results.

Xolo behavioral temperament can be compared to a typical Working breed, with high intelligence, sensitivity, and social instincts. However for the same reasons, well-raised Xolos make outstanding and affectionate companion dogs that bond strongly with their dog-wise humans.

Though physically grown at 1 year, dogs including Xolos are not emotionally mature until after the age of 2 years. Like other highly intelligent breeds such as terriers, and with the additional intelligence and energy of a "primitive" dog breed, Xolo intelligence, energy and spirit are such that they need calm, persistent and loving training. Therefore, obedience training and continued training and socialization is needed until adulthood at 1-2 years of age.

Quality and knowledgeable dog training is more critical with this breed than most other dog breeds, because of their intelligence and spirit, and energy during puppyhood. Anyone considering adopting this breed should expect to invest in additional dogtraining education for themselves, plus ensuring a spacious, safe physical environment for the Xolo puppy(ies) - more so than most other breeds. The reward is a hypoallergenic, intelligent and affectionate canine companion.

As their breeding has followed natural selection for thousands of years, rather than alteration of the natural form per varying human tastes, the breed is generally not prone to health and structure problems as many other dog breeds may be, if they have been well-bred. Xolos are not suited for outdoor life in temperate and northern climates and should be considered an indoor dog. They need bathing, light grooming and skin care as with other dogs of similar physical type, including skin care proper for un-coated varieties or acne. "For the Hairless: Most skin problems arise from poor breeding, neglect, or over-bathing and over-lotioning, stripping natural protections and clogging pores.[9] A well-bred, hairless Xolo will have very fine soft skin, yet hardy." (- quoted from www.dogbreedinfo.com/xoloitzcuintle.htm). Lighter colored Xolos will need protection from strong sun.[10]