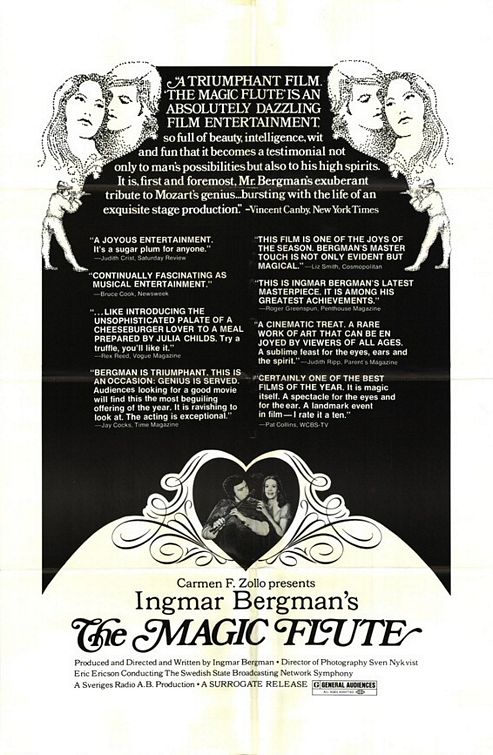 "The Magic Flute" ( _sv. Trollflöjten) is 's 1975 highly acclaimed version of Mozart's opera "". It was intended as a -production and was first shown on Swedish television but was followed by a cinema release later that year.

Bergman made a major change in the plot: Sarastro is Pamina's father, and has a good claim, morally and legally, to her custody. In addition, The Three Boys introduce themselves, instead of being introduced by the Queen's Three Ladies; thus, in Bergman's version it is obvious from the first that the Three Boys are not in the Queen's service.

Cast (in order of appearance)

*Tamino:
*Three Ladies: ; ;
*Papageno:
*Queen of the Night:
*Pamina:
*Monostatos:
*Sarastro:
*Papagena: Elisabeth Erikson
* Bergman himself appears briefly in shots of the audience group, as does Sven Nykvist, the cinematographer.

Bergman constantly reminds the viewer that this is a theatrical event, repeatedly showing the audience. As the overture begins, a close-up shot of the face of a young girl (in fact, Ingmar Bergman's daughter) fills the screen. Gradually this gives way to close-ups of a multitude of faces in the audience - faces of many races, ages, classes. The young girl from the overture re-appears frequently, cut into the action on stage and reacting to those events; her facial expressions often express the mood of the music as it moves from lighter to darker.

As scenes change, so the mechanics of the theatre reveal themselves; day turns to night as the Queen of the Night arrives and, from the point of view of an audience member, we witness the shifting backcloths moving to create the new scene. Similarly, when Papagena and Papageno joyously discover each other in a winter landscape, the chiming of the magic bells theatrically turns the scenery from Winter into Spring while the two characters remove portions of each other’s winter garments.

Furthermore, throughout the performance and during the intermission, we get backstage views of the theatre. Tamino plays his flute while, through the wings, we catch sight of Papagena and Pamina for, at this stage in the plot, they have not yet met. The opposite happens when Pamina and Papageno are on stage and, this time, it is Tamino who is seen sitting on a ladder in the wings. During the intermission, Sarastro's men gather on the stage chatting. Sarastro himself sits reading the score of "Parsifal" while the camera pans to one of Monastatos’ henchmen (a young boy in dark makeup and jester's costume) reading a comic book. Pamina and Tamino play chess in the dressing room. The Queen of the Night smokes a cigarette (right in front of a "Smoking Forbidden" sign). Finally, as the curtain is about to rise for Act 2, a character peers through a low peephole in the curtain and he is joined by Sarastro who peeps through a higher one. Throughout, we are constantly reminded of the mechanics of the “show” we are witnessing.

However, the film is also very cinematic. There is an emphasis on close-ups of the singers, but the mechanics of cinema also allow for manipulations of time and space. For example, prior to Papageno’s entry, there is a cut to the singer backstage in his dressing room. Suddenly, to be ready for his cue, he jumps up and rushes to the wings where he plays the appropriate chord on his pipe, is then helped into his birdcage by a stagehand, and finally makes the appropriate entrance to find Tamino. Later, as Tamino looks at the locket containing Pamina’s picture, she comes alive inside the locket with the ominous face of Monastatos glimpsed over her shoulder, foreshadowing a possible problem. Equally cinematic are the obvious “real” scenes taking place in the snow, which could not be realistically created on stage.

Both theatre and cinema are important in the final minute of the film: each part of the action seamlessly dissolves into the other, as the camera pulls back, first to witness Pamina and Tamino in an embrace that, in turn, gives way to a theatrical backdrop falling into place. Then the backward moving camera (taking us further and further from the action on stage) shows us Papagena and Papageno also kissing. The couple is circled by a group of small children (possibly the little Papagenas and Papagenos lyrically imagined a few minutes before) until the camera pulls back further to reveal the proscenium arch and a dissolve takes us to the final drop of the curtain and the rise of the audience’s applause.

The sound was not actually recorded in sync with the photography. The singers pre-recorded their parts and then ed to the music which was played back as they performed.

According to film historian ’s notes for the release of the film [Peter Cowie, essay] , Bergman wanted to recreate as closely as possible the original production in the in . He had hoped that the film could be shot in the historic , one of the few surviving theatres in the world, and the introductory exterior shots of the film suggest that this is where the opera is filmed. However, the scenery at Drottingholm "was considered too fragile to accommodate a film crew. So the stage – complete with wings, curtains, and wind machines – was painstakingly copied and erected in the studios of the Swedish Film Institute" [Cowie, see below] .