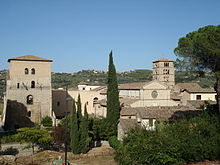 The Abbey of Farfa.

Farfa Abbey is a territorial abbey in northern Lazio, central Italy. It is one of the most famous abbeys of Europe. It belongs to the Benedictine Order and is located about 60 km from Rome, in the commune of Fara Sabina, not far from the Fara Sabina railway station. 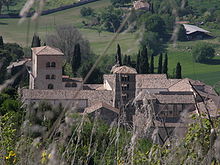 View of the abbey from Monte Acuziano

A legend in the 12th-century Chronicon Farfense (Chronicle of Farfa)[1] records a tradition of the foundation of a monastery at Farfa in the time of the Emperors Julian, or Gratian, by Laurence of Syria, who had come to Rome with his sister, Susannah, together with other monks, and had been made Bishop of Spoleto. According to the tradition, he afterwards became enamoured of the monastic life, and chose a wooded hill near the Farfa stream, a tributary of the Tiber, on which he built a church and a monastery. Archaeological discoveries in 1888[2] seem to prove that the first monastic establishment was built on the ruins of a pagan temple. This first monastery was devastated by the Vandals in the fifth century. Only a handful of sixth-century finds document the early presence of the monastic community.[3]

In the seventh century, a wave of Irish monasticism spread over Italy. The foundation in Bobbio of the Abbey of Saint Columbanus, and the foundation of Farfa by monks from Gaul, about 681, heralded a revival of the great Benedictine tradition in Italy. The Constructio Monasterii Farfensis, which dates probably from 857, relates at length the story of its principal founder Thomas of Maurienne;[4] he had made a pilgrimage to Jerusalem and spent three years there. While in prayer before the Holy Sepulchre, the Virgin Mary in a vision warned him to return to Italy, and restore Farfa; and the Duke of Spoleto, Faroald II, who had also had a vision, was commanded to aid in this work. At a very early date we find traces of this legend in connexion with the foundation by three nobles from Benevento of the monastery of St. Vincent on the Volturno, over which Farfa claimed jurisdiction. Thomas died in 720; and for more than a century Frankish abbots ruled at Farfa.

The Lombard chiefs, and later the Carolingians, succeeded in withdrawing Farfa from obedience to the Bishops of Rieti, and in securing many immunities and privileges for the monastery. If we may credit the Chronicon Farfense, Farfa was at this period the most important monastery in Italy both from the point of view of worldly possession and ecclesiastical dignity, with the exception of Nonantula. It had one large basilican church and five smaller ones, rich in masterpieces of religious goldsmiths work. The greed of the Saracens was excited: and about 890, during the government of Abbot Peter, they swooped down on the place. Peter held out against them for seven years, and then resolved to abandon the monastery. He divided his monks into three sections and shared the abbey's wealth among them — one section he sent towards Rome, one towards Rieti, and one towards the county of Fermo. The Saracens preserved Farfa as a stronghold, but some Christian robbers set fire to it by mistake.

Between 930 and 936, Farfa was rebuilt by Abbot Ratfredus, who was afterwards poisoned by two wicked monks, Campo and Hildebrand, who divided the wealth of the abbey between them, and ruled over it until Alberic I of Spoleto, Prince of the Romans, called in Odo of Cluny to reform Farfa and other monasteries in the Duchy of Rome. Campo was driven out, and a holy monk with the Merovingian name of Dagibert took his place. At the end of five years, he also died by poison — and the moral condition of Farfa was once more deplorable. The monks robbed the altars of their ornaments, and led lives of unbridled vice. 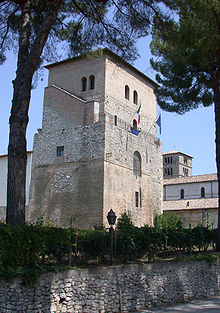 Owing to the protection of the Emperor Otho, Abbot John III, consecrated about 967 by the pope, succeeded in re-establishing a semblance of order. But the great reformer of Farfa was Hugues (998-1010). His nomination as abbot was not secured without simony — but the success of his government palliates the vice of his election. At this instance, abbots Odilo of Cluny and William of Dijon, visited Farfa, and re-established there the love of piety and of study. 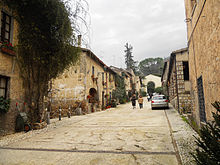 The main street of the hamlet under the abbey 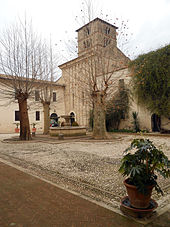 The Consuetudines Farfenses drawn up about 1010 under the supervision of Guido, successor to Hugues, bear witness to the care with which Hugues organized the monastic life at Farfa. Under the title Destructio Monasterii, Hugues himself wrote a history of the sad period previous to his rule; and again under the title Diminutio Monasterii, and Querimonium, he related the temporal difficulties that encompassed Farfa owing to the ambition of petty Roman lords. These works are very important for the historian of the period.

One of Hugue's successors, Berard I, abbot from 1049 to 1089, made the abbey a great seat of intellectual activity. The monk Gregory of Catino (b. 1060) arranged the archives. To substantiate Farfa's claims and the rights of its monks, he edited the Regesto di Farfa, or Liber Gemniagraphus sive Cleronomialis ecclesiæ Farfensis composed of 1324 documents, all very important for the history of Italian society in the 11th century.

In 1103, Gregory wrote the Largitorium, or Liber Notarius sive emphiteuticus, a lengthy list of all the concessions, or grants, made by the monastery to its tenants. Having collected all this detailed information, he set to work on a history of the monastery, the Chronicon Farfense; and when he was 70 years old, in order to facilitate reference to his earlier works, he compiled a sort of index which he styled "Liber Floriger Chartarum cenobii Farfensis". Gregory was a man of real learning, remarkable in that, as early as the eleventh century, he wrote history with accuracy of view-point, and a great wealth of information.

The monks of Farfa owned 683 churches or convents; two towns, Centumcellæ (Civitavecchia) and Alatri; 132 castles; 16 strongholds; 7 seaports; 8 salt mines; 14 villages; 82 mills; 315 hamlets. All this wealth was a hindrance to the religious life once more between 1119 and 1125. And Farfa was troubled by the rivalries between Abbot Guido, and the monk Berard who aimed at being abbot. During the Investiture conflict, Farfa was, more or less, on the side of the Ghibellines.[5] The monks issued an Orthodoxa defensio imperialis in support of the Ghibelline party. The collection of canonical texts contained in the Regesto seems to omit purposely any mention of the canonical texts of the reforming popes of the eleventh century.s But when, in 1262, the victory of the popes over the last of the Hohenstaufen put an end to the Germanic rule in Italy, Farfa sought the protection of Urban IV. At the end of the 14th century the Abbey of Farfa became a cardinalatial in commendam, and since 1842 the Cardinal Bishop of Sabina, a suburbicarian bishop, bears also the title of Abbot of Farfa.

The Orsini family stayed up to early 16th century, consecrating the Cathedral in 1494. Then came the Della Rovere, but the Orsini came back and stayed until 1542; finally it was taken over by the Farnese family. Under the management of Cardinal Alessandro Farnese, the monastery joined the Montecassino Congregation (1567). During the next two centuries, in spite of some restorations and new constructions, Farfa lost all importance. Soon after, Napoleon's suppression came in 1798 followed by the Italian one in 1861 the results being that part of the possessions were sold to private citizens. The inheritors of the last owner, Count Volpi, gave the part of the monastery owned by them and some land around it to the monks. In 1920, a group of monks sent by Alfredo Ildefonso Schuster, then abbot of the Saint Paul Outside the Walls monastery, in Rome (to which is attached the Basilica of Saint Paul Outside the Walls), gave a new life to the Farfa abbey by starting anew traditional monastic praying (the Divine office) and living. In 1928, Farfa was declared a national monument but only much later did restructuring work to the building take place. 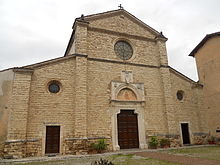 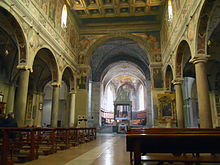 The Cathedral has a huge Romanesque gate, with magnificent floral friezes. The interior has three naves middle one surmounted with a lunette representing the Virgin and the Child. The Renaissance hall has several chapel: in the Crucifix Chapel is housed the most venerated image of Farfa. The interior wall of the façade has a fresco depicting the Last Judgment (1571).

Ruins of the ancient 9th century church are included in the church and the monastery. In 1961, in the apse, a precious Roman sarcophagus from the 1st or 2nd century AD was discovered. The large cloister is from the 16th century. The bell tower belongs to the original Carolingian buildings. Inside, at the lower end, Abbot Sichard had an oratory built.[6]