The National Invitational Camp or NFL Scouting Combine, as it is more widely known, is a week-long showcase, occurring every February in Indianapolis, Indiana's Lucas Oil Stadium (and formerly at the RCA Dome until 2008), where college football players perform physical and mental tests in front of National Football League coaches, general managers and scouts. With increasing interest in the NFL Draft, the scouting combine has grown in scope and significance, allowing personnel directors to evaluate upcoming prospects in a standardized setting. Its origins have evolved from the National, BLESTO and Quadra Scouting organizations in 1977 to the media event it has become today.

Athletes attend by invitation only. Implications of one's performance during the combine can affect perception, draft status, salary and ultimately career. The draft has popularized the term "Workout Warrior", whereby an athlete's "draft stock" is increased based on superior measurable qualities such as size, speed and strength, despite having an average or sub-par college career.[1][2][3] 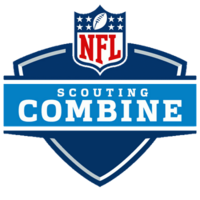 The NFL's first scouting organization, LESTO (Lions, Eagles and Steelers Talent Organization), was started in 1963 by the teams mentioned in its name. It became BLESTO when the Bears joined the following year and BLESTO-V when the Vikings came on board later in the decade. It is now known simply as BLESTO despite the fact that the Bears and Eagles having gone their separate ways.

CEPO (Central Eastern Personnel Organization), formed in 1964, was a joint endeavor between the Colts (Baltimore-based at the time), the Browns, the Packers and the Cardinals (St. Louis-based at the time). Its name was changed twice, first to United Scouting after the Falcons, Giants and Redskins joined its ranks, then finally to National Football Scouting in 1983 to avoid any confusion associated with the United States Football League, the NFL's direct competitor that began its operations that year. National Football Scouting is now known simply as The National.

Also formed in 1964 was Troika by the Cowboys, Rams (based in Los Angeles at the time) and 49ers. It was renamed Quadra when the Saints joined in 1967. Quadra is no longer in existence.

As of the 2008 season (see table below), eighteen franchises participate in The National, with seven served by BLESTO. Each of the seven non-affiliated teams relies on its in-house scouting staffs. [4] [5]

Every year, the directors of BLESTO and The National are seated as members of the NFL Draft Advisory Board. [6] The Board offers its opinion to college football players as to the likely round in which they would be taken, if they forgo college football playing eligibility and enter the draft. The combine directors' experience enables them to offer guided opinions as to the likely round at which a player would be picked.

Each university has a Pro Day, where NFL scouts are allowed to come to the school and watch players participate in the events that take place at the Combine. This is done under the belief that players feel more comfortable at their own campus than they do at the Combine, which in turn leads to better performances. College teams which produce a large quantity of NFL prospects generally generate huge interest from scouts and coaches at their Pro Days.

College teams now rely on events comparable to the NFL Combine as a way to find or discover players. Statistics from programs such as The National Underclassmen Combine, which is for 8th-11th graders, are factored into the recruiting process. This event is the largest and has put the most athletes into college in the USA and is headed up by former star linebacker of the University of Connecticut, David Schuman. Pro Athletes like Joe Haden of the Cleveland Browns and Tyrod Taylor first attended the National Underclassmen Combine.