Moshe Katsav (Hebrew: משה קצב‎, born Musa Qasab, 5 December 1945) is an Israeli politician.[1] He served as the eighth President of Israel, a leading Likud member of the Israeli Knesset, and a Cabinet Minister in its government.

The end of his presidency was marked by controversy, stemming from allegations of rape of one female subordinate and sexual harassment of others. Katsav resigned the presidency on 1 July 2007.[2][3] In a landmark and unprecedented case,[4][5] on 30 December 2010, Katsav was convicted of two counts of rape,[6] obstruction of justice and other charges.[4][5] On 22 March 2011, in a landmark ruling, Katsav was sentenced to seven years in prison. Katsav has appealed his conviction to the Supreme Court of Israel. On 10 November 2011, the Supreme Court affirmed Katsav's conviction and punishment, rejecting possibly exculpatory evidence.

Katsav was born in Yazd, Iran as Musa Qasab.[7] His family brought him to Tehran when he was an infant; in June 1951, when he was five, they immigrated to Israel. He remains fluent in Persian. Upon arriving in Israel, the Katsav family was sent to a ma'abara, an immigrant tent-camp in Israel's south, inland from the port city of Ashdod. In the winter of 1951, severe flooding inundated the camp, and Katsav's two-month-old brother Zion died[8]. Katsav and his family lived in a tent camp for recent immigrants for several years before the camp was developed into the city of Kiryat Malachi.

Katsav attended the Hebrew University of Jerusalem beginning in 1968, and while studying he taught history and mathematics in a high school. He graduated in 1971 with a Bachelor of Arts in economics and history.[citation needed]

He married Gila Katsav in 1969. The couple has five children and two grandchildren. 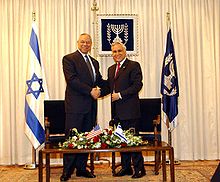 Katsav joined the Likud Party, and at the age of 24 was elected the mayor of Kiryat Mal'akhi, the small town in which he was raised. He was subsequently elected as a Member of the Knesset in 1977.

The public positions filled by Katsav include the following: Chairman of the Iranian Immigrants Organization; Chairman of the commission to determine higher education tuition; and Member of Ben-Gurion University Board of Trustees. 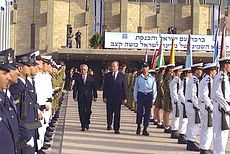 After serving as Deputy Prime Minister in Netanyahu's government, Katsav vied for the position of President, running as the opposition candidate against Shimon Peres. In a surprising upset, he defeated Peres to become the president of Israel, being elected by the Knesset on 31 July 2000. He took 63 votes (over 57 for Peres), two more than the required majority of 61, and was sworn in on 1 August. He was the first President of Israel to have been sworn in for a seven-year term, as well as the first candidate from the right wing Likud party to be elected to the office.

The office of the Israeli President is largely ceremonial, with no executive powers save pardoning prisoners and commuting sentences. Nevertheless, each president emphasizes different aspects of the role during his tenure. In 2003, on a visit to Italy, he demanded that the Vatican restore treasures allegedly brought to Rome after the fall of Jerusalem in 70 AD.[10]

On 8 April 2005, the alphabetic ordering of leaders during the funeral of Pope John Paul II resulted in Katsav sitting near Iranian President Mohammad Khatami who, like Katsav, was born in the Iranian city of Yazd. Katsav told the press that he shook Khatami's hand and spoke to him in Persian. Khatami later denied this.[11]

In July 2006, Katsav complained to the Attorney General of Israel, Menahem Mazuz, that he was being blackmailed by a female employee.[12] The investigation quickly turned against Katsav as the employee, referred to as A., alleged sexual offences.[13] A., who worked with Katsav when he was Minister of Tourism, claimed that Katsav raped her twice and sexually harassed her in various other ways.[14] Katsav was accused of raping and sexually harassing up to ten women. Police raided his house and seized computers and documents on 22 August. There were calls for him to resign or suspend himself from the presidency.[15] Katsav was questioned on 23 August ("under warning").[16]

On 7 September, receiving complaints from at least four different women (according to IBA's correspondent for police affairs), the Israel Police determined that they had enough evidence for an indictment. Katsav did not attend the ceremony swearing-in Dorit Beinisch as President of the Israeli Supreme Court.[17] On 13 September, the Knesset House Committee approved Katsav's request for leave of absence. The ceremony, normally held at the president's house, was moved to the Knesset.[18]

Police said that seven women had testified against Katsav and the allegations included "breach of trust, fraud, and involvement in illegal wiretapping."[19] On September 18, Israel's Attorney General, Menachem Mazuz, stated that the likelihood of Katsav being the victim of a plot was "fairly slim." [20][21] By 21 September, the number of complaints rose to eight.[22]

On 15 October 2006, police said the complaints of five of the women would not be pursued because the statute of limitations had run out.[23]On 29 October, Katsav was advised to step down. While continuing to deny the allegations, he said he would resign if indicted.[24][25]

On 23 January 2007, Attorney-General Mazuz announced that he would consider charging Katsav with rape, sexual harassment, breach of trust, obstruction of justice, harassment of a witness and fraud. The president is immune from prosecution while in office, and could only be tried after the end of his term in August 2007 or after his resignation. The final decision on indictment would be made after a hearing where Katsav could present his case. Katsav took a three-month leave of absence approved by the Knesset on 25 January. Knesset Speaker Dalia Itzik assumed the office of president in the interim in a "caretaker" capacity.[3]

On 7 March 2007, an attempt to impeach Katsav failed.[26] In accordance with a plea bargain, Katsav resigned effective on 1 July 2007 (His seven-year term was scheduled to run out constitutionally on 15 July 2007).

On 24 January 2007, Katsav held a press conference at which he accused journalists of persecuting him and judging him before all the evidence was in. He claimed that the media was hostile to his presidency from the start.[27]He accused Channel 2 of conducting a witch-hunt. Katsav declared his intention to suspend himself temporarily but refused to step down unless indicted. The speech drew shock and condemnation, from journalists, politicians, and legal figures.[28] In a talk scheduled minutes after Katsav's speech, Prime Minister Ehud Olmert called on him to resign from the presidency.

On 28 June 2007, Katsav's lawyers reached a plea bargain in which Katsav would plead guilty to several counts of sexual harassment and indecent acts and receive a suspended jail sentence. He would pay compensation to two of the victims. The rape charges brought by A. would be dropped, as well as Katsav's charges of blackmail. This led to a public outcry, in particular from women's rights organizations. Opinion polls showed that 70 percent of the public objected to the deal.[30][31]A protest at Rabin Square in Tel Aviv drew a large crowd.[30] The attorney general claimed the agreement would spare humiliation of the presidency. Katsav's attorneys said they accepted to avoid an arduous trial.[13]

On 30 October 2007, the state prosecution told the High Court of Justice that it had changed its mind about the indictment on the basis of evidence from the two key complainants. The prosecution cited a meeting with Katsav's attorneys that highlighted contradictions in their testimony, including an affectionate letter from one of the complainants after the two rapes allegedly occurred. The move garnered harsh criticism from the complainants' attorneys.[32] Katsav called off the plea bargain in April 2008. According to one of his lawyers, Avigdor Feldman, he believed the prosecution did not have enough evidence to convict him.[33]

In March 2009, Katsav was formally indicted for rape and other sexual offenses in the Tel Aviv District Court.[34] His trial took place between August 2009 and June 2010 before a panel of three judges, consisting of Presiding Judge George Kara and Justices Miriam Sokolov and Judith Shevach.[35][36] Katsav's testimony began in January 2010.[37] The trial was held behind closed doors (as is customary in trials of sexual offenses) and a media ban was imposed on the details of the trial, witnesses and testimony. The ban was lifted in August 2010, when protocols of the trial were released.[38]

On 30 December 2010, Katsav was unanimously found guilty of "rape, sexual harassment, committing an indecent act while using force, harassing a witness and obstruction of justice" by the three-judge panel.[4] Presiding Judge George Kara read the verdict which stated that Katsav "engaged in a campaign of vilification against the plaintiffs."[39] Katsav faced a maximum sentence of 49 years.[4][40] Prime Minister Benjamin Netanyahu said that it was "a sad day for Israel", but that the verdict shows that in Israel "all are equal before the law, and that every woman has exclusive rights to her body."[41] The conviction was described as "landmark"[4] and "unprecedented"[5], and the story featured prominently in the international media.[42] The sentencing phase began on 22 February 2011.[43]

On 22 March 2011, Moshe Katsav was sentenced to seven years in prison and two years probation for rape, indecent acts, sexual harassment and obstruction of justice, becoming the first former President of Israel to be sentenced to prison. In addition, he was ordered to pay one of the women he raped a sum of 100,000 NIS and another a sum of 25,000 NIS.[44] Katsav's lawyer Zion Amir told reporters that the sentence would be appealed to the Supreme Court.[45]

In July 2011, it was cleared for publication that Katsav was under police investigation on suspicion of using private investigators to harass witnesses and a complaintant. Police suspected that the investigators were trying to obtain new evidence to undermine their credibility. It was thought that Katsav hired the investigators after he was found guilty and before the Supreme Court appeal was filed. Katsav, his brothers Lior and Yoram, and his son Noam were questioned for an hour by National Fraud Investigations Unit officers on suspicion of witness harassment, tampering and invasion of privacy.[46]

In May 2011, Supreme Court Justice Yoram Danziger granted Katsav's motion to stay his entrance to prison until the Supreme Court heard his appeal. Deliberations on the appeal began on 7 August 2011, and were conducted by a three-judge panel consisting of Justices Edna Arbel, Miriam Naor, and Salim Joubran. Katsav's attorney suggested that his client actually was sexually involved with one of the alleged victims, but that no rape occurred. He also suggested that the plaintiffs' testimonies were filled with contradictions. When deliberations resumed on 10 August, Katzav's attorney suggested that his client's actions did not constitute anything beyond "an ordinary hug." Deliberations on the appeal adjourned on 11 August. The court delivered its opinion on 10 November, unanimously upholding Katsav's conviction and sentence. The three-judge panel stated that they refrained from assessing the truth of the statements made by the accusers and otherwise rejected possibly exculpatory evidence. Justice Salim Joubran stated that Katsav "fell from the loftiest heights to the deepest depths. Such a senior official should be a role model to his subordinates. Every woman has a right to her own body. A right to dignity. A right to freedom. No one has the liberty to take any of those from her". Katsav was given one month to put his affairs in order, and will begin serving his sentence on 7 December.[47][48]