The Michigan State Police (MSP) is the state police agency for the state of Michigan. The MSP is a full service law enforcement agency with its sworn members having full police powers statewide.

The department was founded in 1917 as a war-time constabulary and eventually evolved into the modern agency that it is today. The department's enlisted members are called "Troopers". The department had 1,730 sworn members as of November 2009, however, that number has been reduced. It has its headquarters in Lansing.[2]

Throughout the history of the department, its members have participated in many important events. Some of the earliest duties of the department involved its troopers being dispatched on horseback to the iron-rich regions of the state's Upper Peninsula to guarantee the mining and distribution of the vital ore. In the mid-1970s Michigan Governor William G. Milliken gave the Michigan State Police a permanent presence on Detroit area freeways which culminated in the opening of the Detroit Freeway post in Downtown Detroit. This action was taken after a rash of crimes on the Detroit area freeway system and local law enforcement had limited resources in doing expressway patrols on a regular basis. MSP troopers were deployed in Benton Harbor in the summer of 2003 to quell civil unrest that was occurring within that city. Troopers were also deployed to Louisiana in September 2005 following Hurricane Katrina to assist local authorities with search and rescue, law enforcement, and humanitarian efforts in the devastated city of New Orleans, Louisiana. In January and February 2006, the Michigan State Police deployed several hundred Troopers to Detroit during Super Bowl XL and worked with local and federal agencies to ensure a safe environment for the game and its related festivities. The summer of 2007 saw a major mobilization of departmental resources for the National Governors' Conference in Traverse City. The state police were also requested to assist local police agencies with patrol support in the cities of Flint and Saginaw; a similar request was made in February 2008 by the city of Pontiac after budget difficulties forced the cash-strapped city to layoff many police officers. In 2009, the number of Michigan State Troopers was being reduced to just over 1,000 because of budget cuts from the over 1,800 Trooper level of 2005.

On October 1, 2011, in an effort to achieve its $17.7 million general fund reduction for fiscal year 2012, the department's districts were realigned and the number of posts was reduced from 62 to 29. In total, 18 posts were converted to detachments (private auxiliary offices for other posts) and 14 posts were closed; however, no MSP employees were laid off.[3]

Troopers with the Michigan State Police are entrusted with the authority to conduct investigations concerning violations of criminal and traffic statutes throughout the state, regardless of city, township, or county boundaries.

The MSP consists of three bureaus encompassing many different divisions:

The Field Services Bureau consists of two regions that include seven districts encompassing sixty-three posts, seven detachments, and eight resident trooper concepts. Also included in the bureau are the Criminal Investigation Division, Intelligence Section, Special Operations Division, and the Traffic Safety Division. The Traffic Safety Division is responsible for the enforcement of laws and regulations pertaining to commercial motor vehicles. The Special Operations Division includes support services such as the Aviation Unit, Canine Unit, Underwater Recovery Unit, and the Emergency Support Team. Of all the department's Bureaus, it is the personnel of the Field Services Bureau that citizens most often encounter.

The Administrative Services Bureau consists of the Training Division and the Criminal Justice Information Center, as well as other internal support functions for the department. 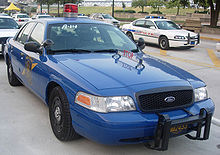 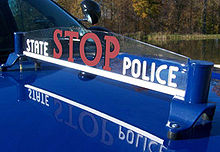 The familiar blue MSP Patrol Car is referred to as "the blue goose" by members of the department. As of 2009, the department's fleet consists of primarily Ford Crown Victoria Police Interceptors. However, the MSP has begun adding Dodge Charger patrol vehicles to its fleet (10 for the 2006 fiscal year). The department also utilizes the Chevrolet Tahoe Special Service Vehicle for canine and motor carrier use. Several other varieties of vehicles, including Chevrolet Suburbans and Impalas, are used by the department's specialized divisions. MSP also deploys troopers on Harley Davidson motorcycles. Michigan State Police choose their vehicles using a weighted formula and results from their annual vehicle evaluation tests.

The distinctive blue paint color used on Michigan State Police vehicles is one of the few law enforcement vehicle special order (VSO) colors that manufacturers add to their color palette specifically for an agency.[4] Per Michigan State Police specifications, the color is the "same as Dulux 93-032" (and which may be identified by other color designations or codes depending on whether Ford, GM, or Chrysler produced the vehicle to which the paint is applied). MSP is fairly unique in its use of both the blue paint of the patrol cars and the red hue of the rotating overhead light as basic livery; the department has used the blue paint scheme and the current door decals since 1956. The MSP also utilizes "slick top" patrol units for traffic enforcement. There are two types of traffic cars: the traditional blue patrol car sans the traditional "gumball" light, and a semi-marked variety that is painted in colors other than blue and marked only on the passenger side. Available in tan, red, white, silver, and black, these units also use hidden LED lights to increase their effectiveness and have been extremely successful. Michigan state law requires that police vehicles be marked at least on the passenger side; a law that dates back to the days of the "side stop."[5] MSP Motor Carrier Enforcement officers who enforce truck safety drive vehicles nearly identical to regular MSP patrol vehicles, except that they have a lighter, sky blue paint color. (As of approximately 2008, MSP has changed the vehicles to have the same paint scheme as a regular State Police vehicle, with the exception of the words "Commercial Vehicle Enforcement" on the rear quarterpanels, usually under the window of a Chevy Tahoe or similar vehicle.

Fully marked patrol vehicles feature a single red overhead light, the RV-25 or RV-26 "Spitfire" made by Unity Manufacturing that rotates when activated; however, in late 2009, MSP announced that these are being retrofitted with red LED lamps rather than incandescent beams to reduce the hassle and expense of replacing the PAR 36 or PAR 46, 60,000 CP sealed beam bulbs and servicing the rotor motors. Red lenses on some MSP vehicle roof beacons have one or two clear horizontal stripes that allow some untinted white light to shine through, and this gives the lamps a pinkish glow at long distances. Michigan State Police have continued to use the "gumball" style lights instead of lightbars as they are unique, reduce wind drag, and are highly visible at long distances,[6] as well as for tradition. MSP vehicles also feature a clear plastic sign, referred to as a "hood light" or "hailer" or "shark fin" on the hood that lights up when activated. The historical use of this hood light dates from the time when a "side stop" patrol stop would be initiated by pulling up next to an offender and the Trooper would motion them to pull over in daylight; at night the hood light was illuminated displaying the words "State Police" and "STOP" (MSP no longer use the "side stop"). Patrol units also use red and blue LEDs facing to the rear of the vehicle, as well as headlight and tail light flashers. Both the rotating overhead light and the shark fin have traditionally been synonymous with the MSP. The rotating red light has been used by the MSP since 1960 and the current style red overhead light has been in use by the agency since 1979. The red overhead lights on some MSP cars are 20–25 years old.

Michigan State Police is one of only two agencies in North America (the other being the Los Angeles County Sheriff's Department) that conduct annual tests of police and special services vehicles. MSP typically conducts their top speed and braking tests each fall at Chrysler Proving Grounds in Chelsea, Michigan and vehicle dynamics and handling tests on the road course at Grattan Raceway in Grattan Township, Michigan. Tests are open to members of the law enforcement community, fleet managers, and other interested parties, and results are published for the benefit of the law enforcement community.[7] Many of the specifications and option offerings for Chrysler, Ford, GM police vehicles are a result of findings and suggestions stemming from MSP evaluations. Annual test results are published at the MSP Website 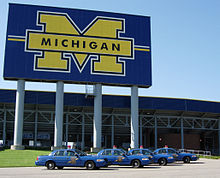 The Michigan State Police operates one Mobile Command Vehicle as of 2006. The 37-foot-long (11 m) vehicle has an International chassis and engine and weighs 25,500 pounds (11,600 kg). It is equipped with GPS, satellite television, a diesel electric generator, and a lavatory. The vehicle is also equipped with a variety of radio systems that allow those operating it to communicate effectively in the field. The vehicle was utilized during Hurricane Katrina relief in September 2005 and is also frequently used at large events throughout the state.

The MSP uses a paramilitary ranking system, as follows (from highest to lowest rankings):

The demographics of the Michigan State Police force:[8]