Mukurthi National Park (MNP) is a 78.46 km² protected area located in the south-eastern corner of the Nilgiris Plateau west of Ootacamund hill station in the northwest corner of Tamil Nadu state in the Western Ghats mountain range of South India. The park was created to protect its Keystone species, the Nilgiri Tahr.[1]

The park is characterized by Montane grasslands and shrublands interspersed with sholas in a high altitude area of high rainfall, subfreezing temperatures and high winds. It is home to an array of endangered wildlife, including Royal Bengal Tiger and Asian Elephant, but its main mammal attraction is the Nilgiri Tahr. The park was previously known as Nilgiri Tahr National Park.

Native hill tribe communities including the Toda people have harvested firewood from the sholas and grazed their animals including the Hill Buffalo for centuries. Indiscriminate felling of the sholas started with the establishment of British settlements in Ootacamund, Coonoor and Wellington in the early 19th century. Beginning in 1841 authorities issued contracts to bidders to fell wood from specific sholas in a 'timber conservancy' program. In 1868 James Breeds, Commissioner of the Hills, wrote: "...unless conservancy is taken in hand and organized under some efficient system under the control of an experienced officer, the destruction of the sholas is but a question of time."[3] 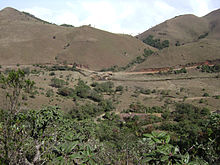 Bangitappal (Cannabis tableland), at the southwest end of the park at the confluence of two streams at the head of the Sispara Pass, used to be a halting place on the old Sispara ghat road from Kozhikode to Ooty, constructed in 1832. This pass provided a short land route for postal runners from Ooty to the West Coast in the 19th century and was used for smuggling of cannabis, tobacco and later salt.[4] A forest rest house and a trekkers shed built there in 1930 are now used by park staff and visiting researchers.

Unlike the others, the wattles spread by root suckers to quickly cover large areas of native grasslands, including the Mukurthi Hills, and was declared a pest "useful for covering wastelands.".[5] Some Black Wattle plantations were maintained for the leather industry, as their bark yielded tannin.

In 1882 Inspector General of Forests, Dietrich Brandis "recommended bringing the present 1,200 acres (4.9 km2) of plantation up to 5,000 acres (20 km2) to create enormous forest blocks "...which would make any remaining sholas redundant forest resources."[6] The entire area of MNP, was declared as a Reserve forest in 1886.[7]

In 1920 it was suggested that 10–15 acre plots in the Kundah Hills including the present park area, "be planted up each year in places where sholas have almost or quite disappeared, the most suitable species probably being Acacia dealbata (Silver Wattle)", thus replacing highly diverse endemic and stable ecosystems with an exotic monoculture supporting little animal diversity.[8] 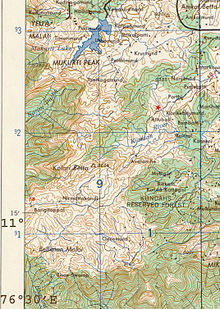 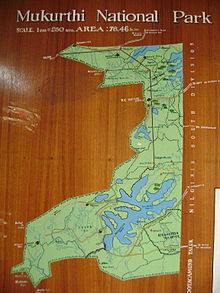 On the Nilgiri Plateau, the Kundah range of the Nilgiri hills is a ridge on the south-western side of Mukurthi National Park bordering Kerala. The Tamil Nadu/Kerala border here is 39 km long. The park generally slopes towards the east and south receiving water from the Billithadahalla, Pykara and Kundah rivers, and the Upper Bhavani and Mukurthi reservoirs which flow through the park. Also several perennial streams originate in the park, most of which drain into the Bhavani Puzha.[11] 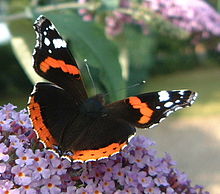 Butterflies with Himalayan affinity like the Blue Admiral, Indian Red Admiral, Indian Fritillary, Indian Cabbage white and Hedge blues are seen here. Some streams had been stocked with exotic Rainbow Trout in the past.[14]

The area is home to numerous endemic plants particularly of the scapigerous annual Impatiens plants. Alchemilla indica and Hedyotis verticillaris are found only within or on the fringes of this park. 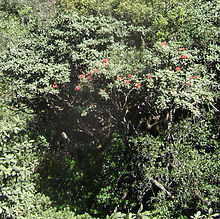 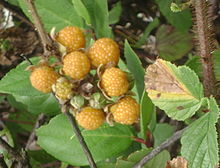 The natural habitats of the park have been much disturbed by previously easy motor vehicle access through four different entry points and[16] extensive commercial planting and natural spreading of non-native eucalyptus and wattle (Acacia dealbata, Acacia mearnsii and other species). In addition there is one large, and several smaller hydro-electric impoundments in the area.[17]

Only 20% of the park area has more than a 50% chance of being used by Tahr. If old commercial forests are removed and restored to their original grassland habitat, usable Tahr habitat would increase to 60%.[18]

Mukurthi National Park is Managed by the Tamil Nadu Department of Forestry with the main objective to conserve the endangered shola-grassland ecosystem and its endemic flora and fauna. The department operates an effective year round anti-poaching program with gun and radio equipped foot patrols operating from anti-poaching camps at Bangitappal, Nadugani, Western Catchment and Mukurthi Fishing Hut. 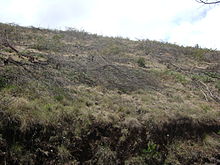 Prevention and control of destructive Wildfire is achieved through creation of artificial firebreaks in the form of hand dug fire lines along ridges and cleared trek paths. Local fire watchers are employed for early detection and control during the dangerous December to April fire season. Invasive imported plant species, especially Wattle, Scotch broom and Gorse are being controlled and eliminated from the park through a phased long term program focused on restoration of the original biota.

Tourism is not a management objective, but the Forest Department does periotically conduct nature awareness and conservation programs for the public and some special interest groups through controlled visits to the Western Catchment and Avalanche areas of the park. 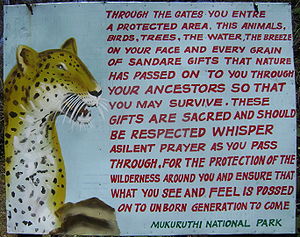 Casual tourism and commercial tour operation is not permitted and tourist facilities are not available in the park. Special interest groups are sometimes permitted for supervised educational programs, trekking and camping. There are Forest Rest Houses at Bangitapal, Avalanche, Pykara and some unfurnished trekking sheds.

A mostly down hill 3, 4 or 5 day trek through Mukurthi and Silent Valley National Parks starts by driving 75 km from Udhagamandalam (Ooty) in 4 hrs and 1 km walk to overnight at Bangitapal. Walk 24 km through Mukurthi Park in 9 hrs to overnight at Walakkad, or overnight half way at the new trekkers bungalow at Sispara peak then continue 12 km steep downhill the next day to Walakkad. Walk 18 km in 7 hrs to overnight at Poochipara. Walk 8 km in 3 hrs to Sairandhiri in Silent Valley, then take a park van out or overnight at Sairandhri and trek 23 km to Mukkali village A forest guide-cum-cook accompanies park visitors during all treks.[19][20] In some cases the guide may instruct visitors to bend down to drink straight from a stream like a deer and prohibit bathing in a stream so the silt at the bottom is not disturbed and because human body odour might affect the animals.[21]

Beginning in November, 2007 the Forest Department has organised trekking programmes inside forest areas of Mukurthi Park with the objective to familiarise the public with the conservation efforts of the department. The places covered by various treks are Mudimund, Mukurthi Peak, Western Catchment, Bangitapal, Moyar, Anaikatti, Morganbetta, Avalanchi, Kolleribetta, Sispara and Silent Valley. Trek distances vary between 8 km. and 60 km. Each group comprises up to 20 members. Guides, instructors, cooks, porters, tents and food are provided by the department. Trekkers have to bring ruck sacks and sleeping bags.

The nearest airport is Coimbatore – 140 km. The nearest Railway station is Udhagamandalam – 45 km. The best seasons are February to May and September to November.[23]