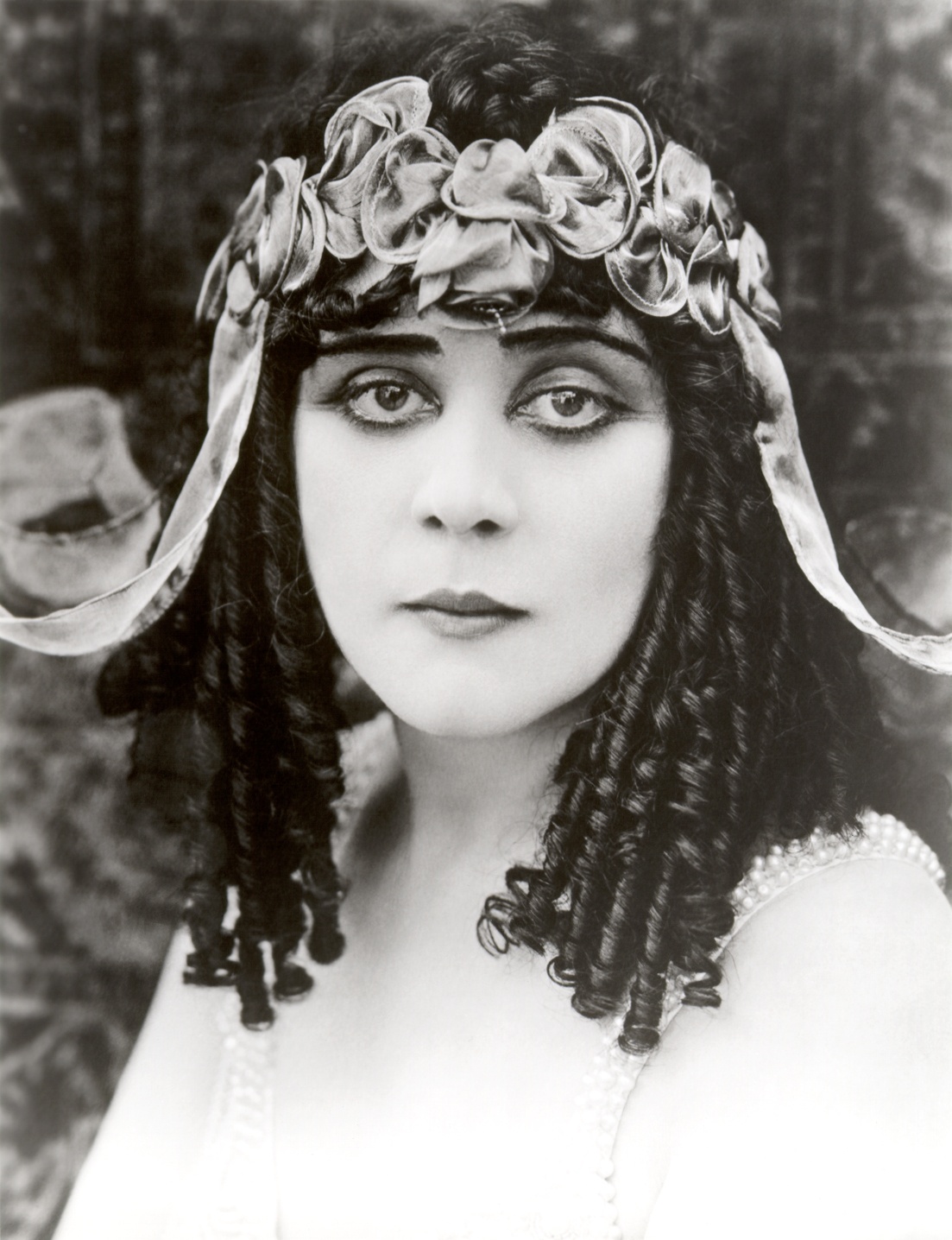 Theda Bara was the stage name and later legal name of Theodosia Burr Goodman (, – , ), an American actress. Movie executives made promotional claims that her stage name was chosen because it is an for "Arab Death." In reality, "Theda" was a childhood nickname for Theodosia. "Bara" apparently was a shortened form of her maternal grandmother's maiden name, Baranger.

Bara was one of the most popular screen actresses of her era, and was one of cinema's earliest s. Her roles earned her the nickname "The Vamp" (short for ). The term "vamp" soon became a popular term for a sexually predatory woman. Bara, along with the French film actress , popularized the vamp persona in the early years of silent film and was soon imitated by rival actresses such as and .

She attended from 1899 to 1903 and lived at 823 Hutchins Avenue. After attending the for two years, she worked in theater productions mainly but did explore other projects, moving to New York City in 1908. She made her Broadway debut in "The Devil" (1908).

Theda Bara made more than 40 feature films between 1914 and 1926. Complete prints of only six of these films still exist. Most of Bara's films were produced by William Fox, beginning with "A Fool There Was" (1915) and ending with "The Lure of Ambition" (1919). The phenomenal success of "A Fool There Was" gave William Fox the money to found , while the ensuing films helped to make Fox a successful studio.

At the height of her fame, Bara was making $4,000 per week for her film performances. She was one of the most famous movie stars, ranking behind only and in popularity. [http://oncotton.co.uk/starr/documents/THEDAprogramme&PDF.pdf] Bara's best-known and most popular roles were as "vamp" characters, although she attempted to avoid being typecast by playing more wholesome heroines in films such as "Under Two Flags" and "Her Double Life". She also appeared as Juliet in a version of Shakespeare's "". Although Bara took her craft seriously, she was too successful as an exotic "wanton woman" to develop a more versatile career.

Most of Bara's early films were shot on the East Coast, primarily at the Fox studio in . Bara lived with her mother and siblings in New York City during this time. The rise of Hollywood as the center of the American film industry forced her to relocate to Los Angeles to film the epic "Cleopatra" (1917). This film became one of Bara's biggest hits. No known prints of "Cleopatra" exist today, but numerous photographs of Bara in costume as the Queen of the Nile have survived.

Between 1915 and 1919, Bara was promoted heavily by Fox, and was the studio's biggest star. When the studio lessened their support, her career suffered. Bara, tired of being typecast as a vamp, allowed her five-year contract with Fox to expire. Her final film for Fox was "The Lure of Ambition" (1919). She left Fox and did not make another film until "The Unchastened Woman" (1925) for . Bara retired after making only one more film, the short comedy "" (1926), made for , in which she parodied her vamp image.

Theda Bara is most famous for having a higher percentage of lost films than any other actor/actress with a Hollywood star on the Walk of Fame. A 1937 fire at Fox's nitrate film storage vaults in New Jersey destroyed most of that studio's silent films. Out of her 40 films, 3 remain completely intact. "Cleopatra" (almost completely lost, 40 seconds remain), "Du Barry", "Carmen", "Salome", and "Camille" are among the lost. Fortunately, "A Fool There Was" is preserved in a complete print. "Madame Mystery" is preserved in a 9.5mm print which runs 21 minutes, which may be an abridged version for home viewing. [ [http://www.SilentEra.com Silent Era : The silent film website ] ]

Bara is often cited as the first [ [http://www.classicimages.com/1996/july/theda.html Classic Images - Vol. 250 - April 1996 Issue ] ] of that era, and in a number of her films appeared in risqué transparent costumes that left little to the imagination. [ [http://www.bombshells.com/gallery/bara/theda_gallery.php Theda Bara Photo Gallery - Bombshells.Com ] ] Such outfits were banned from Hollywood films after the started in 1930, and then was more strongly enforced in 1934.

Bara was photographed in several sittings in skimpy -themed costumes. It was popular at that time to promote an actress as mysterious and elusive, with an exotic background. The studios promoted Bara with a massive publicity campaign, billing her as the Egyptian-born daughter of a French actress and an Italian sculptor. They claimed she had spent her early years in the under the shadow of the , then moved to France to become a stage actress. (In fact, Bara had never even been to Egypt or France.) They called her the "Serpent of the " and encouraged Bara to discuss mysticism and the occult in interviews.

At the height of Bara's fame, her vamp image was notorious enough to be referred to in popular songs of the day. A line in "Red-Hot Hannah" said "I know things that Theda Bara's just startin' to learn - make my dresses from asbestos, I'm liable to burn...." The song, "Rebecca Came Back From Mecca", contains the lyrics "She's as bold as Theda Bara; Theda's bare but Becky's bare-er", The song "If I had a man like Valentino" contains the chorus lyric, "Theda Bara sure would die; she would never roll another eye".

Bara married British-born American film director (1883-1957) in 1921. Her film career soon began to slow down, finally ending with the comedy "Madame Mystery" made for Hal Roach in 1926. The following year, Bara made a successful but much maligned appearance on Broadway in "The Blue Flame".

Though she subsequently expressed interest in returning to the stage or screen, her husband did not consider it proper for his wife to have a career. She did make at least three interview appearances on radio from Hollywood: on the , broadcast of ""; as a guest on 's "For Men Only" on March 7, 1939; and on , November 8, 1939.

The actress died of stomach cancer in 1955 in Los Angeles, California, and was interred as Theda Bara Brabin in the Forest Lawn Memorial Park Cemetery in . Her death certificate incorrectly listed her birthday as "July 22, 1892".

Theda Bara has a star on the and in 1994, she was honored with her image on a United States postage stamp designed by caricaturist . In June 1996, two biographies appeared, Ron Genini's "Theda Bara: A Biography" (McFarland) and 's "Vamp" (Emprise). In October 2005 TimeLine Films of premiered a film biography, "Theda Bara: The Woman With the Hungry Eyes". A film by British video artist titled "Theda" based around Bara's lost films premiered in London in November 2006. [ [http://www.georginastarr.com/ Georgina Starr ] ]

The Fort Lee Film Commission dedicated Main Street and Linwood Avenue in , as "Theda Bara Way" in May of 2006 to honor Bara, who made many of her films at the Fox Studio on Linwood and Main.