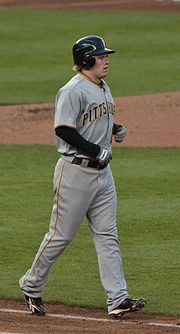 Nathan Richard McLouth (born October 28, 1981 in Muskegon, Michigan) is a Major League Baseball player. Primarily a center fielder, McLouth bats from the left side and throws from the right. He is 5' 11" tall and weighs 185 pounds. His last name is commonly mispronounced; the correct pronunciation rhymes with the word "mouth", rather than the word "youth".

After graduating from Whitehall Sr. High School, where he stole 179 bases in 180 attempts in his high school career, McLouth was selected by the Pirates in the 25th round of the 2000 June draft. McLouth would have been chosen much sooner (namely by the very interested Boston Red Sox), but many scouts believed that he had a firm commitment to the University of Michigan. McLouth was named Michigan's Co-Mr. Baseball, Michigan Gatorade Player of the Year, and USA Today Honorable Mention All American in 2000. After an encouraging debut in full-season ball with the Hickory Crawdads, he struggled with the high-A Lynchburg Hillcats in 2002. McLouth rebounded with a strong season at that same level in 2003, however, earning a spot on the league's All-Star team.

McLouth continued to advance steadily through the minors, and on June 29, 2005, he made his major league debut. As a result of an injury to starting center fielder Chris Duffy, McLouth received a substantial amount of playing time through the end of the season. In 109 at-bats, he compiled a .257 batting average, a .305 on base percentage, and a .450 slugging percentage.

McLouth made the Pittsburgh Pirates 2006 opening day lineup as a backup outfielder, sending outfielder Jody Gerut to start the year in Triple-A.

McLouth entered spring training 2008 in a competition with teammate Nyjer Morgan for the starting job as the team's center fielder. McLouth batted over .300 in the preseason and won the job. He began the 2008 season with a 19-game hitting streak, 20 dating back to 2007, which ended on April 22. McLouth then struggled for the first three weeks of May. However, after seeing his batting average drop to a season low of .298 on May 21, McLouth rebounded with a four-hit performance the next day against the Milwaukee Brewers.

McLouth was selected as a reserve to represent the Pirates in the 2008 MLB All-Star Game, and was among the league leaders in various offensive categories. He also made a clutch throw from center field in the 10th inning to catcher Russell Martin for an out at the plate that cut down the potential game-winning run for the American League. Martin later commented that Nate's throw was "perfect". He also led off an inning with in infield single, and in his final at-bat, with the game tied, he hit a long fly ball that was caught just 3 feet (0.91 m) in front of the warning track.

In a July 28 game against the Colorado Rockies, McLouth hit a home run that soared over the right field grandstand of PNC Park and landed in the Allegheny River (443 ft from homeplate).McLouth received the 2008 Roberto Clemente Award as "the Pirates player who best exemplifies the standard of excellence achieved by Clemente. McLouth was second in NL outfielder fielding percentage to Ryan Braun in 2008, and was awarded the Gold Glove Award for the outfield for his performance.[1]

Although not a prolific base stealer, he has been extremely successful when he has attempted to steal. Through 2008, he had been successful in 57 of 62 career attempts, a success rate of .919 (Carlos Beltran holds the all-time career record for a player with 300 or more career attempts at .881 - reference: http://www.baseball-almanac.com/recbooks/rb_stba.shtml).

On June 3, 2009, McLouth was traded to the Atlanta Braves for prospects Jeff Locke, Charlie Morton and Gorkys Hernández.[2]

On December 2, 2009, McLouth gave his usual jersey number, #13, to new teammate Billy Wagner. He switched his number to 24, previously worn by Jordan Schafer. He returned to wearing #13 for the 2011 season after Wagner retired following the 2010 season.

On September 6, 2010, McLouth hit a fly ball that would have been a grand slam but instead got robbed by Florida Marlins outfielder Cameron Maybin, with the play resulting in a two-run sacrifice fly.[3]