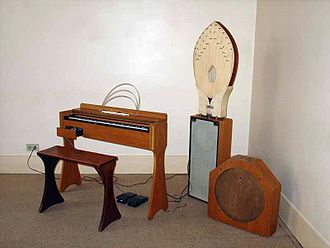 /ˈoʊnd mɑrtɨˈnoʊ/ or ohnd mar-tə-noh; French: [ɔ̃d maʁtəno], "Martenot waves"), also known as the ondium Martenot, Martenot and ondes musicales, is an early electronic musical instrument invented in 1928 by Maurice Martenot. The original design was similar in sound to the theremin.[1] The sonic capabilities of the instrument were later expanded by the addition of timbral controls and switchable loudspeakers.

The instrument's eerie wavering notes are produced by varying the frequency of oscillation in vacuum tubes. The production of the instrument stopped in 1988, but several conservatories in France still teach it.[2]

In 1997, the Ondéa project began designing an instrument based on the ondes Martenot. Since the Martenot name is still protected, the new instrument is called Ondéa, but has the playing and operational characteristics of the original ondes Martenot. In 2001, a completed prototype was first used in concerts. These instruments have been in regular use since 2005.[3][4]

Since 2008, Jean-Loup Dierstein, with the support of Maurice Martenot's son, has been developing a new, officially called ondes Martenot instrument based on the model used when production stopped in 1988. [5]

The ondes Martenot has been used by many composers, most notably Olivier Messiaen. He first used it in the Fête des Belles Eaux for six ondes, written for the 1937 International World's Fair in Paris[6] and then used it in several of his works, including the Turangalîla-Symphonie and Trois Petites Liturgies de la Présence Divine. His opera Saint-François d'Assise requires three of the instruments. The composer's widow, Yvonne Loriod-Messiaen arranged and edited four unpublished Feuillet inedits for ondes Martenot and piano which were published in 2001.[7] The ondes Martenot has also been used occasionally in transcriptions: Leopold Stokowski used the instrument in his ethereal orchestration of Buxtehude's Sarabande and Courante ("Auf Meinen Lieben Gott").

Other notable composers who have employed the ondes Martenot in their works include Charles Koechlin, Edgard Varèse (as a replacement for two theremin instruments in his work Ecuatorial), Arthur Honegger, Darius Milhaud, Cemal Reşit Rey, Maurice Jarre, Sylvano Bussotti, Giacinto Scelsi, Marcel Landowski, Karel Goeyvaerts, Pierre Boulez, Tristan Murail, Henri Tomasi, and Frank Zappa. André Jolivet wrote a prominent concerto for it in 1947.[8] Bohuslav Martinů authorized the adaptation of his Fantasie to the use of the ondes Martenot when it proved difficult to perform on the Theremin, for which it was originally written.[9]

Estimates of the number of works written for ondes Martenot vary. Hugh Davies reckoned there to be around a thousand works composed for the instrument.[10] Jeanne Loriod's figures are the more widely quoted: she estimated that there were 300 pieces of chamber music, including 14 concertos.[citation needed] Jacques Tchamkerten's provisional catalogue of works for ondes, included in the current reprinting of Loriod's Technique, lists far fewer works than either of these figures.[11]

In cinema and television

Arthur Honegger used it for Berthold Bartosch's film The Idea (1930, score added 1934). It was used by composer Brian Easdale in the ballet music for The Red Shoes. It was frequently used in horror and science fiction movies and television, notably in the 1950s. British composer Barry Gray frequently used it in his scores for Gerry Anderson's television series, and American composer Dominic Frontiere used it in a few episodes of the television series The Outer Limits (1963–65). Film composer Elmer Bernstein incorporated the instrument into many of his works beginning with Heavy Metal, in 1981. Maurice Jarre also used of the instrument. It was used by the composer David Fanshawe in the British television series Flambards. One of the few anime composers who has used the instrument is Takashi Harada in the soundtracks of A Tree of Palme (2002) and in Binchō-tan (2006).

One of the first integrations of the ondes Martenot into popular music was achieved in French chanson during the fifties and sixties. For example in some of Baudelaire's poems set to music by French singer Léo Ferré in 1957 (and later 1967), or in popular dramatic lovesong Jacques Brel's "Ne me quitte pas" (1959).[citation needed] During the seventies Beau Dommage and Harmonium, the two most popular musical groups of the Quebec musical scene, made extensive use of this instrument (introduced there by Marie Bernard) in each of their 1975 albums, respectively Où est passée la noce? and Si on avait besoin d'une cinquième saison.[citation needed] Harmonium later toured with Supertramp and received several reviews of their work by English-speaking musical critics of progressive rock, who noted their use of the ondes Martenot.[citation needed]

Jonny Greenwood is often credited with bringing the ondes to a larger audience (meaning English-speaking audience) through Radiohead's Kid A (2000), Amnesiac (2001), Hail to the Thief (2003) In Rainbows (2007), and The King of Limbs (2011) albums. Greenwood uses the ondes Martenot often in his solo efforts, and has written a piece for the instrument, entitled Smear.[citation needed] In live concerts, Radiohead have used six ondes for "How to Disappear Completely".[12]

The ondes Martenot was also utilized by Bryan Ferry, in 1999, on the album As Time Goes By, and by Joe Jackson on his 1988 soundtrack album for Tucker: The Man and His Dream and his 1994 album Night Music. Recently, ondist Thomas Bloch has toured in Tom Waits and Robert Wilson's show "The Black Rider" with Marianne Faithfull (2004–2006) and in Gorillaz leader Damon Albarn's show "Monkey: Journey to the West" (2007 onward).[citation needed]

Also, Yann Tiersen, well known for writing the music to Amelie, often features the use of the ondes Martenot in his music. His DVD La Traversee, documenting the recording of Les Retrouvailles, shows his use of the instrument.[citation needed]

The ondes Martenot is also used in the Muse song Resistance.[15] 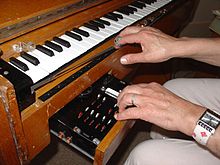 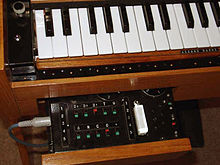 The ondes Martenot is unique among electronic musical instruments in its methods of control.[16] Maurice Martenot was a cellist, and it was his vision to bring the degree of musical expressivity associated with the cello to his new instrument.[17] The ondes, in its later forms, can be controlled either by depressing keys on the six-octave keyboard (au clavier), or by sliding a metal ring worn on the right-hand index finger in front of the keyboard (au ruban). The position of the ring corresponds in pitch to the horizontal location along the keyboard. The latter playing method allows for unbroken, sweeping glissandi to be produced in much the same manner as a Theremin. The keyboard itself has a lateral range of movement of several millimeters, permitting vibrati of nearly a semitone below or above the pitch of the depressed key to be produced.

By depressing keys or moving the ring, no sound is initially produced. A control operated by the left hand and situated in a small drawer of controls (tiroir) on the left side of the instrument controls the musical dynamics, from silence to fortissimo. This control (touche d’intensité) is glass and lozenge-shaped, and can be depressed several centimetres. The depth to which this key is depressed determines the dynamic level: the deeper, the louder. The manner in which it is pressed determines the attack of the note: quick taps produce staccato articulations, whilst more controlled and deliberate depressions are used to play legato.

The small drawer of controls also contains flip-switches to control the instrument's timbre. These function in much the same way as a pipe organ's stops can be added or removed. Like organ stops, each switch has its own sound color which can be added to the chorus of other timbres. The 1975-model instrument features the following timbres:

In addition to the timbral controls, the control drawer also contains flip switches which determine to which loudspeakers (diffuseurs) the instrument's output are routed. These are labeled D1 to D4.